Women on the Verge: Lipsky’s Overwrought Portrait of Dysfunction 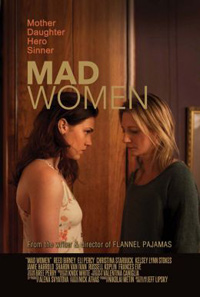 Those having experienced the independent cinema styling of Jeff Lipsky won’t be surprised by the end product of his latest overblown cascade of maudlin litanies in Mad Women. A forced provocation ruinously scored by an endless patter of affected, hopelessly insincere bits of dialogue, the ineptitude is exacerbated by this being Lipsky’s sixth feature, and yet this production bears the same marks of amateurism as his previous endeavors. Shrill, annoying, and as graceful to observe as a symphony of tapered fingernails viciously excoriating a football field sized chalk board, the end result features overly rehearsed actors floundering through endless, exaggerated monologues.

Nevada Smith (Katie Lynn Stokes) is the product of a seemingly affluent environment. Residing in the privileged community known as Iris Glen, she is the second of three children belonging to her dentist father Richard (Reed Birney) and mother Harper (Christina Starbuck). We gather bits and pieces about the considerable dysfunction in their family, beginning with Harper’s run for office following a scandalous prison sentence where she was caught up in a murder plot to assassinate a man targeting abortion doctors. Harper has grand plans for Iris Glen, and as we learn of her aspirations to bulldoze cemeteries to make space for the living and eventually call for the secession of their area from the rest of the nation, we catch other glimpses of their family. Father Richard is eventually charged with statutory rape. Consuming LSD with Harper at a John Fogerty concert, he locked himself in the men’s bathroom and amidst spray painting a mural on the floor has his way with a sixteen year old female, an act that haunts him. With her parents attempting to navigate through these problems, dad goes to prison and Nevada isn’t sure where she fits in anymore. Her youngest sister died tragically as a child, while her elder sister joined Doctors Without Borders and is only available via Skype. Eventually, Nevada develops an unhealthy relationship with her mother around the same time a secret admirer, Otto (Eli Percy), makes his presence known.

Despite utilizing different cinematographers on each of his features, the technical proficiency retains the same prominently puttering, stagey pallor, thanks in part for Lipsky’s insistence on barging in on his characters in such a way it seems evident actors were just standing around, jumping immediately into the ‘take.’ Mad Women is no exception, with Valentina Caniglia taking credit for tiresome framing.

We jump back and forth through Nevada’s (who shares a name with a late 1960’s Steve McQueen character) increasingly troubled familial history, continually returning to the family’s high point where her mother gives a grandiloquent speech in her bid for political office. Actress Kelsey Lynn Stokes may take center stage, but it’s a risibly thankless role, thanks mostly to Lipsky’s infantile monologues.

At the film’s delirious height of outrageousness, Nevada must explain to her boyfriend Otto she’s been concurrently engaged in an incestuous relationship with her mother, as we’re treated to a wildly uncomfortable visual sequence to prove everyone’s seriousness. While there may be certain perverse glee to be attained, Lipsky’s heavy-handedness crashes through a scenario requiring an expert balance to succeed. Nevada explains to a confidante she searched for ‘hours’ at the public library on the internet for a ‘positive, healthy’ example of a sexual relationship between a mother and daughter.”This nugget is one of many eye-rollers, as nearly every monologue Stokes ‘acts’ through contains such leaden nuance (“I’m obsessed with palindromes!”). The style recalls the soft, whispery diatribes utterbed by ingénues featured in Atom Egoyan films, lisping through patches of enlightened observations in their relation to the narrative.

Accomplished cast members such as Reed Birney (his credit in House of Cards dominates the film’s marketing materials) are as equally stilted as lesser knowns, though the continual return to Harper’s discordant political speech is not an appealing sketch for actress Christina Starbuck. With a running time eclipsing two hours, Mad Women is a conflagrant bit of ostentatious filmmaking, featuring ideas concerning identity and dysfunction stillborn in Lipsky’s celluloid resin.