Control: A Frenzied Look at the Early Days of the IRA 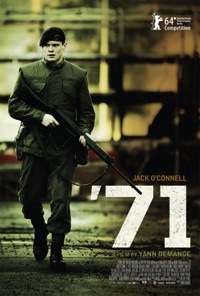 Yann Demange, whose resume consists of serviceable, albeit unexceptional, television fare, has achieved the unlikely with his feature-film debut, ’71. He’s managed to create a highly kinetic, politically intelligent and consistently propulsive thriller that sustains its visceral and cerebral components for an appropriately brief runtime. It’s the sort of assured freshman work that sets the bar high, making Demange instantly bankable while also projecting the pressure of expectation onto his next project.

The premise, though deceptively simple, is as concise as it is effective in rendering a delineated world with an array of palpable narrative possibility. Private Hook (Jack O’Connell), a new enlistee in her majesty’s army, is assigned to Belfast as part of a protective unit for the local constabulary whose regimen consists of forcing their way into IRA territory to glean information from presumed militants. To clarify any potential ambiguity that might arise from the socio-political environment being presented, we’re offered a colour-coded map denoting the geographic specificity—and discomforting proximity—of each territory, whether protestant or Catholic.

This introduction is as brief as it is expository—being one of the few moments of contextual calm throughout the story—leading us into a mission that immediately escalates out of control, putting Hook on the wrong side of the stronghold, left to the mercy of his imposed enemy.

Amidst the absolute chaos unfolding before us, glimmers of context, tone and social outrage seep into every shot. Bewildered young soldiers hold off a line of enraged citizens while people are beaten for information in their own living rooms. Every corner of this environment has its own story and sense of ire, making the sheer act of a soldier walking into a house to find a senior officer a revelatory moment that shows us both sides of the coin. Even before the central sets into motion, we’re given a visual tapestry of the muddied politics and extremist sensibilities that will define the world that Hook, a young, naïve man in way over his head, is about to discover.

Obviously, the persisting theme of sending children into wars outside of the scope of their understanding is paramount here. But Demange isn’t keen on using exploitive or overly sentimentalized tactics to convey this. Instead, the horror presented is very matter-of-fact and raw, as is the violence. While intense and often shocking, there’s nothing that promotes or indulges in the senseless titillation of it. The visceral sensibility is entirely realist and unglamorous, throwing the audience into what ultimately turns out to be an hour-long chase through streets, apartment complexes and underground hideouts filled with an entire array of differing subsections of gangs of varying hierarchies.

Even though the technical component of ’71 is its most discernable virtue—the chase scenes and cat-and-mouse interplay within a claustrophobic environment are consistently intense and engrossing—there’s care to ensure that every secondary character has an elaborate, unique sense of purpose that isn’t always clear. Alliances and motivations, though eventually explained, are never presented in a forthright manner, leaving us as much in the dark about who to trust as our overwhelmed but industrious protagonist is. It is only Hook that has a clear agenda, trying to survive and navigate trust in an environment where everyone seems to have an agenda that contradicts even those that should be their allies.

What’s most remarkable about Demange’s impassioned look at the insanity of war is that it works extremely well as an above average action thriller without sacrificing any sort of thematic integrity. This is an entertaining, albeit highly disturbing, movie that’s also complexly layered and full of vital political dialogue. It’s proof that just because a film stimulates the senses it doesn’t have to be dumb.