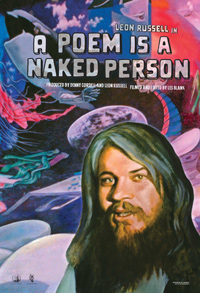 Highly regarded documentarian Les Blank’s 1974 debut finally sees an official theatrical release over forty years after its completion, thanks in to part to the thankful relenting of its subject. Blank, known for a filmography fascinated with capturing American musicians as well as a duo of Werner Herzog focused titles, passed away in 2013. Thanks to the support of Blank’s son, who secured the approval of singer Leon Russell, A Poem is a Naked Person is finally available for consumption. However, it’s more of an interesting artifact from a bygone era than it is a document of a musician or the particular flavor of his scene, and isn’t particularly the greatest introduction to either Blank or Russell.

It’s not difficult to see why Leon Russell declined to let the film be released, considering Blank, commissioned to make the feature stretching over a period of 1972 to 1974, didn’t seem invested in making Russell the main draw of the material. In fact, Russell feels like a peripheral specter merely on hand to tie this peculiar portrait of dusty Oklahoma together. We get snippets of other musicians, several whose legacies haven’t faded from the zeitgeist, like Willie Nelson or George Straight, but time has turned the tables since Blank’s reputation as a documentarian has eclipsed Russell’s music career. Here, Russell was at his zenith, and he cuts a striking figure, performing in his signature southern drawl to excited fans it would be difficult to imagine flocking around him in today’s aesthetically obsessed culture.

Footage of recording sessions should most likely appeal to those well-versed in the milieu, though these sequences often feel like the extra features attached to something we assume has greater importance. Of more interest to the casual viewer are the striking peripheral sequences Blank captures. Interviewing an old couple who speak about as excitedly about Russell as they do with their new found fascination with long hair, Blank begins gathering snippets of interesting tidbits making up the landscape.

We witness a catfishing episode as well as a tractor pull. And then we get to see a boa constrictor snack on a little chicken while the image is used doubly as a metaphor for a pointed voice over. Perhaps most arresting of all is a man who literally chews up an actual drinking glass and between the violent crunching in his maw dedicates the act to the people of Oklahoma. It’s these bits of banalities Blank manages to spin into an offbeat style of observation, and exactly what makes A Poem is a Naked Person seem innovative for audiences at last getting a peek. But those who are ignorant of Leon Russell may be better served to dabble around in his discography prior to seeing this in order to have a greater understanding or appreciation for the time and effort poured into this documentary neither its creator nor subject seem enthusiastic about.