Ask and You Shall Receive: Burnett’s Adaptation Buoyed By Arresting Performances 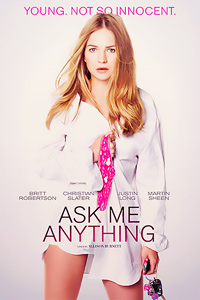 Landing somewhere on a spectrum of unraveling female adolescent prototypes that plays like one part Evan Rachel Wood in Pretty Persuasion mixed with two parts Thirteen is Katie Kampenfelt, the heroine of director and novelist Allison Burnett’s latest feature, Ask Me Anything. Adapted from his own novel, Undiscovered Gyrl, his vanilla retitling doesn’t quite sit properly atop his intriguing, if sometimes baffling venture into the psyche of a superficially maladjusted teenage girl, instead sounding like a title you’d expect to grace the NeNe Leaks story. An intriguing, if sometimes questionable supporting cast rally splendidly around a noticeable central performance from Britt Robertson, often making up for the film’s tonal missteps to become a surprisingly entertaining indie feature that will have a hard time rising above the tethers of its mediocre packaging.

Deciding to take a year’s break before pursuing her college degree, Katie Kampenfelt (Robertson) is advised to start writing a blog as a means to wrangle her restless ennui. Mostly obsessed with how she’s going to get a car so she can stay involved with her older fling, Dan (Justin Long), a married man moving some distance away, Katie begins to feel quite enamored with her blogging, which mostly recounts her many indiscretions, though she’s changed the names and places of the lives they could effect. “I’m used to only being famous in my own mind,” she muses upon seeing the number of visitors he blog receives. She lives with her mother (Molly Hagan) and soon-to-be step-dad (Andy Buckley), though stays in touch with her loving but somewhat distant beer-swilling dad (Robert Patrick). Neither will buy her a car, so she takes a job at a local book store run by the fatherly Glenn (Martin Sheen), but it’s a short-lived situation once it’s discovered that Glenn is a convicted sex offender. But fortune smiles on darling Katie, for she’s immediately offered a babysitting gig by Paul Spooner (Christian Slater), which equips her with a Volvo. Trying to figure out how to stay in touch with the generally apathetic Dan while her needy school-age beau Rory (Max Carver) doesn’t seem to be much better of an option, Katie’s year of rest and relaxation becomes much more menacing than she ever could have predicted.

If the fresh faced Robertson seems familiar, you may have caught her in an equally adept performance in Jon Kasdan’s 2012 debut, The First Time, a film that suffered greatly for trying too hard to remain nonchalant and genuine. She’s also featured in the television adaptation of Stephen King’s ‘Under the Dome,” and stars alongside Jennifer Aniston in this year’s Cake. But her performance as the well-spoken and spritely Katie Kampenfelt manages the feat of being slyly comical while exploring Burnett’s darker themes revolving around sexuality troubled by social mores and private remonstrance. What’s more aggravating is that it promises to end on a graceful (if unremarkable) note, but then takes a sharp left into a heavy handed message movie. True, Burnett has an intriguing ‘trick’ up his sleeve, but it’s incredibly jarring and, like the title, doesn’t quite sit right, and perhaps a similar effect could have been reached less drastically.

Still, Burnett nails some worthwhile moments between Robertson and players like Molly Hagan, Robert Patrick and Martin Sheen. Even Christian Slater doesn’t take us out of the proceedings as an increasingly creep employer, married to, of all people, Kimberly Williams-Paisely. Justin Long and Lorraine Toussaint are also part of the mix, though aren’t given much to do. Though it’s likely the kind of film that one will accidentally stumble across on some streaming service, Ask Me Anything is a head above the glut of similarly themed and routinely rashly released American indie films available for consumption at any given moment, even if it doesn’t quite homogenize all its elements successfully.