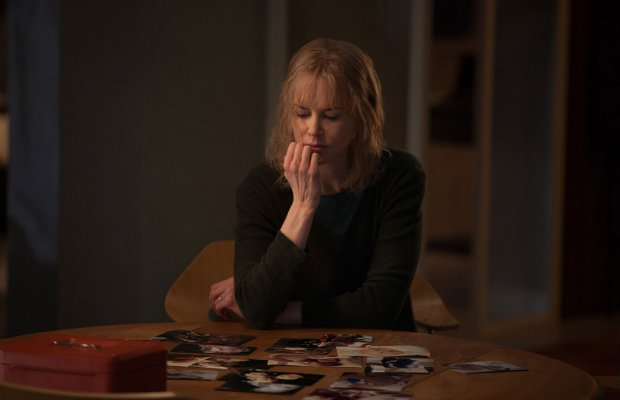 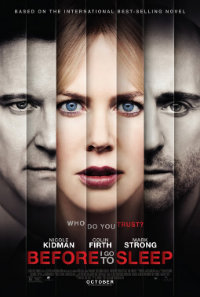 Adapting S.J. Watson’s pulpy novel Before I Go to Sleep for his second feature film (2010’s remake of British noir Brighton Rock, starring Helen Mirren, was his neglected debut), screenwriter cum director Rowan Joffe forges onward in material that seems veritably inveigled with the past. Many may be pleased with the surprisingly tense platitudes Joffe ascends to with this material, though that may be due to the fact that films of this ilk are generally made so shoddily that they fold before the third act. No, Joffe understands a thing or two about fun twists and engaging tension (take his screenplay for the 2007 zombie sequel 28 Weeks Later, for instance), and this sophomore effort feels a bit like those women-in-peril films that were a staple of 90s suburban nightmare cinema.

Christine (Nicole Kidman) awakes in the morning not knowing who or where she is. She’s in bed with a man (Colin Firth), who it turns out is named Ben and is her husband. At least that’s what the wall in the kitchen says, which has a storyboard of pictures and post-its featuring the couple and their information. Alarmed, she runs back into the bedroom and is told that she had an accident a decade ago and suffers from amnesia. Every night, her mind erases what happened the day before, and so, like a Sisyphean curse, Ben must trudge through the elementary basics of their life together before going off to work as a chemistry professor. She seems to take this in stride, but as soon as Ben leaves, the phone rings and a man named Dr. Nasch (Mark Strong), a neuropsychologist, informs her that she has secretly been in treatment with him over the past couple weeks. He directs her to a camera buried in her closet, an instrument that’s been serving as her personal memoir. Together, they’re going to get Christine to recall just what happened to her a decade prior.

Certain to be compared to Christopher Nolan’s memory-loss thriller Memento (2000), Joffe’s film has more of the ‘page-turner’ element to its chewy story, something you’d expect to see phrases like “white-knuckled,” or “one sitting” splashed across the book jacket. Kidman is subdued into a vulnerable housewife role, a pin-up fantasy for the controlling male, an affluent subservient reminiscent of Sleeping With the Enemy (1991). She even asks, incredulous at every realization when fed her rote explanation each morning, “I just sit around all day?” Though theirs is not an exemplary relationship, Firth and Kidman, paired once more after the drudgery of The Railway Man (2013), at least get to have a bit more fun with their dry chemistry this time around.

It’s immediately obvious that something’s off about Firth’s doting dullard of a husband. Even if we’re leery of the secretive neuropsychologist played by Mark Strong, he seems like the lesser of two evils, at least giving her erased mind something to work with. Arriving after David Fincher’s Gone Girl makes Kidman’s helpless Christine seem like the butt of a cruel period joke, the gender politics on display of the conservative, handily acceptable format, deeply ingrained in our cultural understanding of how men and women seemingly allow themselves to be treated. She does, eventrually, get to claw back at her antagonizer, but Joffe, shockingly, puts her through the ringer, a surprisingly garish portrait of domestic violence arriving in theaters at the tail end of October, Domestic Violence Awareness Month.

Though it may not register as anything more than a pulpy thriller (which would be a shame, as it features a memorable reveal that feels akin to someone telling Carol Kane about a phone call’s origins), Before I Go to Sleep is entertaining, accomplishing effectively what it sets out to do.