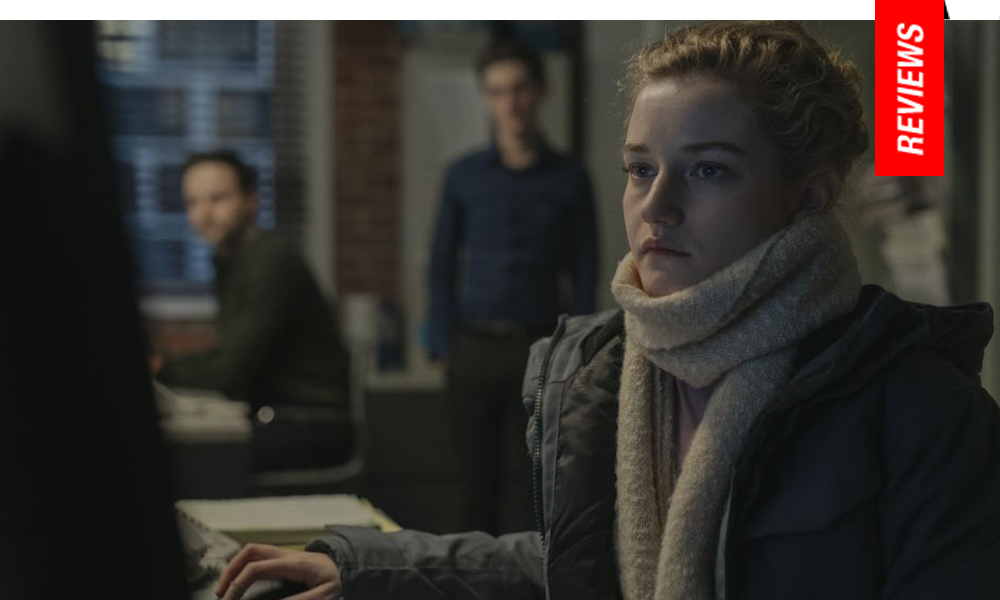 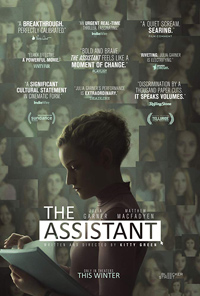 Documentarian Kitty Green (last on hand with her unique memory tapestry Casting JonBenet, 2017) moves into narrative filmmaking with The Assistant, a title which, like the central character it employs, is a hollowed out, generic reflection—a blank slate if you will. Perhaps aggravating, perhaps even too esoteric as she dances around an entertainment industry situation clearly inspired by or at least in confluence with the dark saga of Harvey Weinstein, Green doesn’t name names, and it gives her first narrative feature a sense of timelessness, a bit less tethered to a specific time and place in the new century—again, in climes with people and social mores in flux, or rather, conveniently undefined for those at the top.

Jane (Julia Garner) is the meek and mild-mannered junior assistant to a notable entertainment executive. Working incredibly long hours and engaged in a constant buzz of banal taskings her boss (and his legion of middle managers in the hierarchy above Jane) are too important to do themselves. While the work itself is empty and demeaning, the time constraints have placed the young woman in a vacuum, neglecting friends and family. We join her at the beginning of one incredibly long shift, where her gender and position find her constantly compromised, forced to take the phone calls from the executive’s accusatory and emotional spouse (which brings immediate censure) to questioning why a beautiful young blonde woman would be flown in from Idaho to be an assistant without any qualifications and whose hotel room was visited by the executive. Or was it? It’s an open secret but Jane has no proof as well as no agency.

Without a doubt, there’s a nagging austerity to The Assistant, which feels like it plays out in real time over one agonizingly frazzled shift, wherein the regular acceptable slights end up becoming a preferred normality following Jane’s (whose own name is generic—she could be Jane Doe) thwarted attempt to speak to HR. In a sense, Green’s film feel more European than American, a bit less emotionally abusive towards her characters and audience than a Haneke, but maybe a bit more infatuated with the mechanics and semantics of the workplace, like a Cantet or Brize—in other words, it’s a film which is likely to frustrate and perturb. Which is exactly the point of the film, which leaves one feeling beaten down, drained, even ornery.

We’re used to workplace melodramas, especially those dealing somewhat seriously with sexual harassment, as being highly titillating, overly dramatic—usually someone will go to jail or there’s even likely to be violence and murder. As the day wanes on Jane, one can feel her browbeaten and downtrodden—if Green doesn’t allow us to experience anything definite about her, it’s because the character has allowed herself to be an amorphous extension of her occupation and is currently without an identity.

In the film’s most intense sequence, when Jane treks off to HR, where Matthew McFayden’s Wilcock comes across like an Orwellian floor warden, Green perfectly simulates why people don’t speak up when something’s wrong, how silence is preferable to the fear of stepping out of line, even when it’s the right thing to do. “Don’t worry, you’re not his type,” is the succor she’s offered as she retreats back to her desk, her obnoxious cohorts and the Big Man somehow already aware of her daring indiscretion, left to pen another apologetic email begging for forgiveness, wherein emotions and wrongdoing are stuffed underneath the constant insincere veneer of ‘opportunity’ and ‘networking.’

If Kafka had made it to the corporate world in the digital age, he would have spun soap operas like The Assistant, where people are trapped (crushed) and suffocating within the machine which simultaneously allows them to live. Tiring and at the same time a rather eloquent example of how dysfunctional, toxic environments are quickly and insidiously normalized, Green provides a portrait of the wrongdoing and abuse many have suffered by showing how difficult it is to put into words, be believed, or be assisted.