Life as a House: Beware the Burbs in Finnegan’s Metaphorical Sophomore Feature 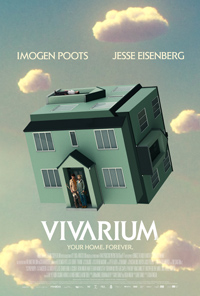 The novelty of Rod Serling’s “The Twilight Zone,” or any of its various offshoots, from “Amazing Stories,” to “Tales from the Crypt,” or the vignette-style films imitating their style (Creepshow; Tales from the Darkside) is in the brevity of their oft-pithy, short-story narrative morals and lessons. Vivarium, the sophomore feature from Ireland’s Lorcan Finnegan (which is co-produced through Belgium and Denmark) has all the makings of a memorable episode of something larger—but as a standalone film, it tends to sag beneath the weight of its concept and three-character claustrophobia—all who are, like the aforementioned series, designed more as cultural markers than three dimensional beings. An intriguing premise falls into the trap of an overly extensive second act, abandoning Kafkaesque for a gonzo yet trenchantly predictable conclusion.

Happy-go-lucky British elementary school teacher Gemma (Imogen Poots) and her American gardener boyfriend Tom (Jesse Eisenberg) aren’t yet married but they’ve decided to hunt for a place of their own together. They visit the offices for Yonder, a burgeoning new suburban paradise they’ve seen billboards for. The office manager Martin (Jonathan Aris), is a bit off-putting, but they make a visit to an available house in the newly minted neighborhood. But as they return to their car and drive off, they find themselves stuck in an endless loop.

Running out of gas, they return to the home they were shown and climbing atop the roof, Tom sees an endless sea of Monopoly-like houses, all perfectly drab. Without signals on their phones, the couple are forced into a brand-new suburban routine upon residing in the home. Soon, a baby arrives in a box on their doorstep with a note promising if they raise the child, they will eventually be able to leave. As the child grows exponentially, Tom and Gemma try to resist but fall into a gendered routine, and the boy starts to look and awful lot like Martin while eerily imitating their voices and mannerisms. But as Martin grows into a man, it would seem Tom and Gemma might not be able to leave—at least not in the way they planned.


Poots and Eisenberg give realistically moderated performances in such a surreal scenario, with Poots allowed more screen time and narrative entry points as a woman forced into ‘mothering’ a being she has no feelings for. And thus, we realize an incident from the film’s opening sequences, wherein a hatchling bird is ousted from its nest and Gemma explains to a precocious student the way of the cuckoo bird (who lays her eggs in the nests of other birds to rear), is the map key for what Vivarium is doing, so titled for the seminatural habitats used to observe experiments on plant life or animals. An inverse to something like John Wyndham’s 1957 The Midwich Cuckoos (made twice into a film as Village of the Damned), Vivarium has all the requisite subtexts worthy of exploration concerning all those prepackaged benchmarks of heteronormativity which supposedly denote meaning to our realities. But as the child grows, the writing is on the wall long before Vivarium descends into its finale with material which gets stuck on the same cerebral note.