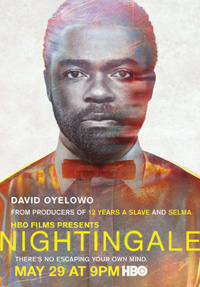 Director Elliott Lester, best known for his 2011 Jason Statham offering, Blitz, adapts firstime screenwriter Frederick Mensch’s character study Nightingale for the big screen, to surprisingly compelling effect. Cinched into the cozy house of its main character, we witness first hand the unraveling of a mind after a dastard deed. As we’re never really allowed to travel outside of these confines, it sometimes feels like the filmed version of a play. Slight visual texturing aside, everything takes a backseat to a masterful performance from David Oyelowo, the driving force of every single minute of film, a space never shared with any other physical actor. It’s a meaty, multifaceted role, something nearly extinct in modern climes where multiple intersections of storylines stomp all over any given narrative.

Peter Snowden (Oyelowo) is an incredibly lonely and persistently overwrought person. With a penchant for recording himself in conversations and posting them online, which seems to serve as both a meaningful interaction with the world and a way to vent his frustrations, we learn that Peter has recently killed his mother, her corpse still lying in the bedroom upstairs. Free of whatever control she had exerted over him, we learn via phone conversations, both real and imaginary, the solitary, numbing existence Peter has been living. Enamored with his old army friend, Edward, to the degree that it’s obvious Peter is very much in love with him, all his sights are set on getting Edward to come over for dinner. However, it appears that Edward’s wife does not want to let Peter speak with her husband, resulting in abusive litanies during multiple harangues as Peter desperately tries to get his invitation through. But as he’s focused on this, friends and family begin to wonder why they can’t speak to mother.

While Oyelowo should already be a familiar face thanks to high profile works from Lee Daniels, Ava Duvernay and Kevin MacDonald, his performance in Nightingale is even more impressive in comparison to an already outstanding output. Vulnerable, unhinged, and grimly saddening, Oyelowo is utterly convincing as Snowden, a man who has lived too long as an inauthentic self. Lester and screenwriter Mensch reveal only hints of his slipping down life that’s brought him to living inside his head, virtually disconnected from the physical world enough to finally murder his mother and pursue connecting with his old army buddy, for whom he harbors significant romantic feelings.

There’s an odd streak of humor laced in here as well, revealed through Peter’s countless and tirelessly patient phone conversations with his mother’s friends and relatives, assuring them that she’s fine but not able to speak on the telephone for whatever reason. At times, Nightingale is reminiscent of Linklater’s Bernie or Herzog’s My Son My Son What Have Ye Done due to the subject matter. But the uncomfortable desire at the core of all of Peter’s motivations most strikingly recalls Miguel Arteta’s Chuck & Buck (2000).

The film also serves as the debut feature for cinematographer Pieter Vermeer, who should be acknowledged for subtly moving us through a story stuck in a cramped, unhappy home. Peter Snowden is a distressing, unhappy character to spend eighty minutes with exclusively, and while the offscreen explosion of noise is hardly necessary in its closing moments, one can’t help but feel moved by this desperate struggle to tap into a more fulfilling reality. While it’s an indie film that may get stuck in a certain niche of film festival audiences, Oyelowo (who is primed for an excellent year or two, with upcoming roles as MLK, Clifton Henderson, and appearing in new titles from Christopher Nolan, J.C. Chandor, amongst several other projects) is deserving of considerable attention for his performance in the Nightingale.