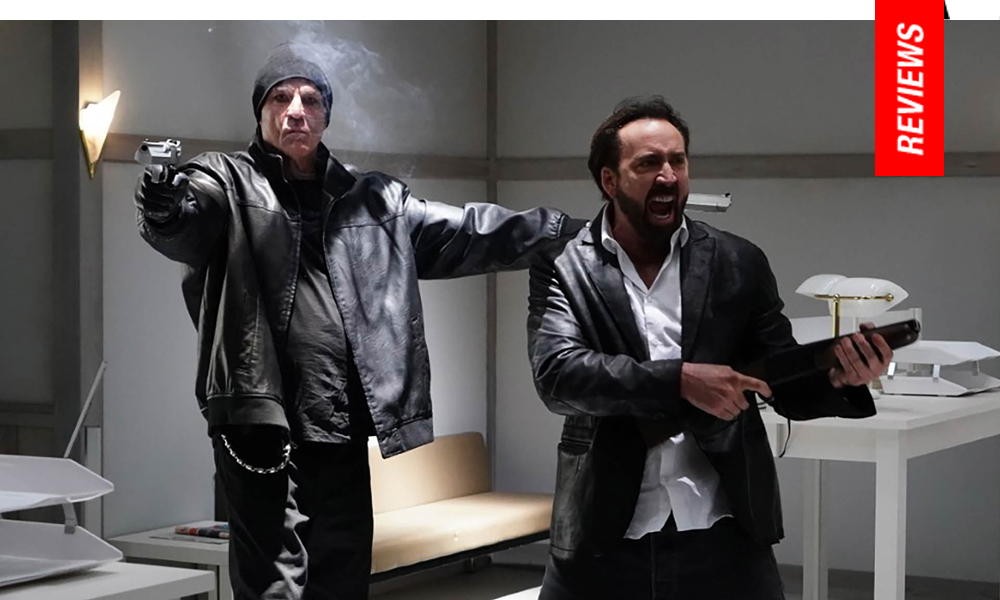 What happens when a cult actor meets a cult filmmaker? Well, sometimes they just might cancel one another out, which seems to be the case of Prisoners of the Ghostland, a candy-colored carnival of influences which marks the English language debut of Sion Sono, employing Nicolas Cage as a madman protagonist defined more by wardrobe than characterization. A mish mash of Shakespearean epithets, Emily Bronte, and George Miller formulates a genre jumping revisionist sci-fi western musical. However, this gonzo goulash is strictly heterogenous and despite some novel production value often ends up feeling more like a chore than an adventurous odyssey into the forbidden zone. Die hard fans of either Sono or Cage might find enough to be amused, but this unfortunately feels like a missed opportunity.

Bank robbers Hero (Cage) and Psycho (Nick Cassavetes) bungle a bank robbery in Samurai Town, the last stand of civilization in a land warped by nuclear fallout. With his trigger-happy partner killed, Hero is apprehended and thrown in prison. A wounded young girl in the melee grows up to be Bernice (Sofia Boutella), adopted granddaughter of the Governor (Bill Moseley), who, along with other of his various ‘kin’ are sex workers in the love hotels of the town’s red-light district. But Bernice eventually absconds with two of her cohorts and the Governor releases Hero to work as a captive bounty hunter. Decked out in a leather suit set to explode in three days’ time (including with specific explosives which will detonate if they perceive imminent violence towards women at specific physical pressure points, like the arms and groin), Hero sets off to find Bernice. Instead of returning peacefully, they spearhead the growing revolution against the corrupt officials of Samurai Town.

Sono’s Prisoners of the Ghostland plays something like the campier version of the most insane offerings of Seijun Suzuki (particularly his Taisho trilogy), a filmmaker whose best works (at least his most cohesive works) benefited from restraint. Since we’re so used to Nicolas Cage as an unhinged purveyor of all hysterical registers, he feels somewhat demure as Hero, even sometimes upstaged by the scene chewing of his co-stars, like Nick Cassavetes (who starred opposite Cage in 1997’s Face Off) and a delightfully camp Bill Moseley as a pedophile governor who likes to wear all-white.

Two juxtaposed set-pieces reflect the detail and care of the production design, but neither Samurai Town nor the nuclear wasteland of some post-Fukushima parallel universe feel as if they’re actually inhabited by these characters, instead presented like a reenactment or an art installation at a lofty carnival. A plot resembling The Searchers but dressed in garish neon (like Jacques Demy on an LSD trip) falls apart basically from the jump. Cage’s fetish gear appears to be an ill-fitting suit which borrows its particular exploding design from something like the B-grade likes of Wedlock (an entertaining Rutger Hauer-Mimi Rogers production from 1991). Other elements oscillate between extremely shrill (Yuzuka Nakaya) to somnambulistic (a completely underutilized Sofia Boutella).

Lensed by Sohei Tanikawa (who served as cinematographer on Sono’s 2008 masterpiece Love Exposure), Prisoners of the Ghostland feels like a mixture of two other exhausting Sono epics, including 2013’s beloved Why Don’t You Play in Hell? and the 2014 musical Tokyo Tribe. The script from Aaron Hendry and Reza Sixo Satai could have used some considerable punching up, particularly in the dialogue department. Not even Cage fondling a bloody testicle is enough to quicken the film’s pulse.