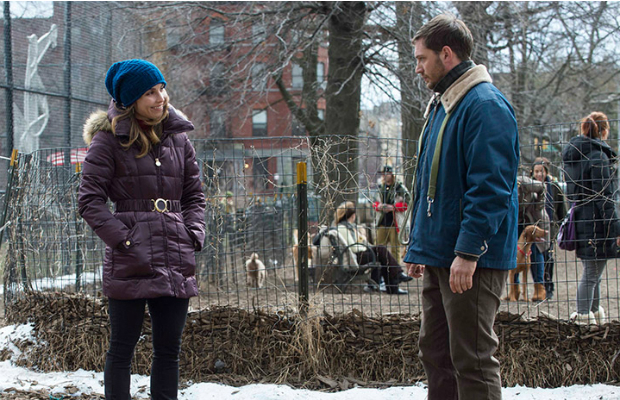 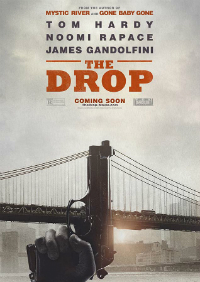 Coming off the white hot success of his hard hitting, Oscar nominated debut, Bullhead, Michaël Roskam signed on to helm a Hollywood backed crime film adapted by famed writer Dennis Lehane from the author’s own short story, Animal Rescue – an obvious next step that bears all the teetering weight that comes with the swagger of star power and the shimmer of golden statues. Though The Drop fails to live up to its sky high expectations, it’s no doubt a respectable attempt at roping cheap canine melodrama within a tightly wound yarn of underground corruption and long buried familiar dirty laundry.

Speaking of laundry, the criminal epicenter of Roskam’s tale stands as a seedy bar in Brooklyn where locals come to celebrate or drown their sorrows and the pub’s rough Chechen owners come to launder their dirty money. The bar, Cousin Marv’s, was named after its previous owner (the late, great James Gandolfini), a former crime boss himself who handed the deed over to greedier gangsters long ago after what one is left to assume was a bet gone terribly wrong. Behind the bar is Bob (Tom Hardy), a soft spoken man whose awkward nonchalance allows him to work within the family business without really getting his hands dirty, or so it seems. From the get go, the bar is robbed at gunpoint and Marv and Bob are left pinned between a nosy cop (played with goofy magnetism by John Ortiz) who suspects an inside job and Chechen mobsters with a very low tolerance for lost money.

At the same time, Bob finds himself in the throes of romance after finding an abandoned puppy in a trash can outside the house of Nadia (Noomi Rapace), a waitress with a history of animal care and poor choices. Frustratingly contrived, Bob takes a liking to both Nadia and the dog (he takes him in, names him Rocco and uses him as romantic bait), but their triangular relationship is thankfully complicated when her volatile former lover, Eric (Matthias Schoenaerts) begins claiming ownership of the dog and harassing them at random. In Eric’s erratic skin, Schoenaerts is given room to work some magic, not only bringing an off-hand charisma to his role that was wholly absent from his name breaking role in Bullhead, but a much needed sense of instability within a narrative made up of lawless derivatives.

Having previously scripted Ben Affleck’s Gone Baby Gone, it’s no wonder that Lehane’s latest narrative jaunt echoes Affleck’s subsequently reformed ex-con romance heist thriller, The Town, expropriating the shameless love affair bit while omitting the chase scenes and shoot-outs. Instead, Roskam’s take on the American crime genre is a leaner, meaner piece of cinema that comes to a head in one brilliant final stand-off that almost brings redress to the purposefully brooding, but sluggish first act.

Bathed in the shadows of the Brooklyn underground by cinematographer Nicolas Karakatsanis, The Drop is an elegantly shot and competently acted slow burn suspenser overworked by just a tinge of canine inflected melodramatic flair. The dog as narrative device is annoyingly well worn, but Lehane almost redeems himself by intelligently rendering Rocco as a succinct spiritual metaphor for his newfound owner – a pit bull capable of instilling fear and inducing violence, and still potentially cute, friendly, loyal, forgiving. Upon being educated on the dog’s pedigree, Bob cautiously states, ‘It’s a violent breed,’ knowing all too well how an animal’s upbringing can shape the personality within.