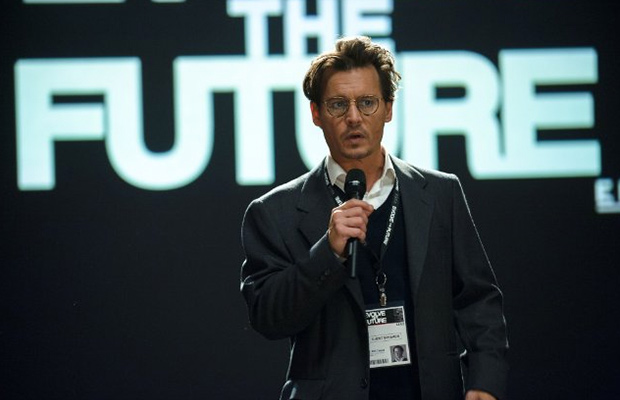 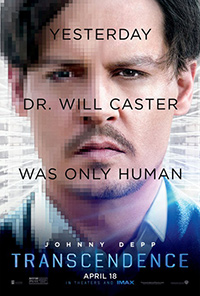 Hopes were perhaps set a bit too high for the directorial debut of Wally Pfister, whose work as cinematographer for Christopher Nolan’s three Batman films and a cast headlined by Johnny Depp made Transcendence seem promising, at the very least. But to say that Pfister’s debut is merely disappointing would be a polite euphemism, for it fails on every conceivable level, unsure of whether it wants to be a romantic drama, a hi-tech thriller, or a lesson in the dangers of advancement and dependence on artificial intelligence. Worse, the film’s shockingly lackluster visual artistry can’t even awe or distract us away from the empty headedness transpiring on screen.

Opening with a mournful Max Waters (Paul Bettany), we hear his omniscient narration about a horrible fusion of mankind and technology that seems to have returned the world, (temporarily, at least) to a pre-internet age, demonstrated by a man’s use of a keyboard as a doorstop. As he wanders into the garden of his seemingly deceased friends, the Casters, we loop back five years to see what he’s so sad about. Dr. Will Caster (Johnny Depp), along with his wife and research partner, Evelyn (Rebecca Hall), have been working on a cutting edge machine called PINN (Physically Independent Neural Network), voiced by a soothing, supposedly self-aware female. When a highly orchestrated series of violent attacks happen simultaneously to AI researches across the country, led by the stone faced Bree (Kate Mara), Will is grazed by a bullet laced with a substance that causes radiation poisoning. With only weeks to live, Dr. Will tries to make the best use of his time with Evelyn and best pal Max. But the increasingly detached Evelyn decides that they need to upload Will’s consciousness into PINN, much like a colleague had recently done with a Rhesus monkey. What transpires goes beyond their wildest hopes and dreams, but soon, the entity that now calls itself Will Caster seems to pose a threat to humanity.

The dangers of merging man with machine, organic and robotic, has been a theme nearly as old as the cinema itself, and the past year has seen several notable examples of this from last summer’s Elysium to this year’s Robocop reboot. However, admirable budgets hardly transcend weak or messy concepts, and Transcendence seems to fall into this slump of films where the development of sound ideas takes a backseat to the allure of profitable filmmaking. Hence, something like Caradog W. James’ indie film, The Machine, explores the dangers of artificial intelligence more logically and thrillingly, even without the command of a budget.

With plot holes at nearly every turn, Pfister’s film seems to be impeded first and foremost by a screenplay (written by Jack Paglen, his first) grappling with too many issues and too many avenues of interest. Thus, characterization takes a considerable backseat, a huge mistake considering that the film is balanced on the undying love of Johnny Depp and Rebecca Hall. While chemistry is non-existent between them, it’s a tossup who gives the more unenthused turn. If this is supposed to be love, theirs is a cold, medicated, and even robotic love, and hardly transcends the definitions or concepts of anything resembling warmth or emotion.

A cast of starry supporters (some bit parts for Lukas Haas and Xander Berkley, who doesn’t even get a line of dialogue) aren’t served any better. The terrorist played by Kate Mara gets an awful blonde dye-job after her group strikes murderously in the film’s set-up. When the films skips ahead two years in time, there she is again with that same blonde mop. These, of course, are cosmetic complaints. Worse are the questions raised by how contained Transcendence is considering this is an all-powerful technological force that has access to every computer in the world, whose demise will create what the world feared would happen during Y2K. Yet, there we all are at the grand finale, a small group of terrorists and scientists, one of them a bedraggled Morgan Freeman, facing off with a force that has managed to inject itself into the atmosphere and commands an army of humans with super strengths.

When Depp’s Will Caster makes a final decision, it only raises more narrative eyebrows about everything that’s come before. To knock the fault and silliness of the narrative is one thing, but when a talented cinematographer like Pfister steps behind the camera to make a hi-tech thriller, one expects a more visually satisfying experience. Employing Jess Hall, who served as dp on notable titles like Hot Fuzz and The Spectacular Now (as well as some other duds like the Brideshead Revisited reboot and 30 Minutes or Less), there’s nothing striking about the look of Transcendence, despite the fact that it looks technically proficient and satisfactorily staged and rendered. Yet, without emotion or tension, all this framing, staging, and editing is as lifeless as an advanced screen saver.