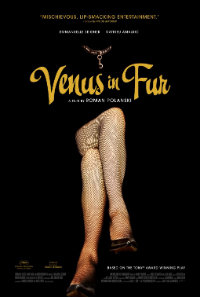 The once quite reticent Roman Polanski quickly returns with yet another adaptation of a popular Broadway play, Venus In Fur, which follows his 2011 star studded Carnage. Say what you will, but Polanski, who often tends to favor claustrophobic chamber pieces, excels with chatty subversiveness, and detractors of the sometimes forced Carnage should revel in this latest effort, a dark labyrinth of comedic mind games that does with words what something like Lady from Shanghai does with mirrors.

A dreary, desolate evening sees a desperate theater director, Thomas (Mathieu Amalric) pacing the stage as he bitches angrily on the phone about the miserable auditions he witnessed all day long for the lead in his new play, Venus In Furs, an adaptation of an infamous novel credited with birthing the term masochism. Clearly, the play is a labor of love for the man, and he’s angry that no one seems to understand the lofty intentions of this hyper sexed period piece. But suddenly entering the theater as if on a gust of wind appears one last harried actress, eerily named Vanda (Emmanuelle Seigner), which happens to be the name of the titular Venus of the play. While Thomas is all set to go meet his wife for dinner, Vanda’s dumb blonde act, at first a turn off, soon has Thomas convinced to stay and let her audition. However, Thomas’ overzealous enthusiasm for his own work seems to make him blind to the fact that this Vanda is not all that she appears to be, busting a convenient number of perfectly designed props out of her cache of goods.

At first reading dumbly from her complete copy of the script (another red flag), the director and actress slip in and out of character to squabble about the true nature of the play. Things start to get personal and we learn that Thomas’ obsession with the material may run deeper than anyone could guess. Suddenly, it seems that Vanda actually has the entire play memorized by heart, and as time quickly passes, it soon becomes hard to recognize who is the director and who is the actress.

Based on the 2010 stage play by David Ives, the play-within-a play is basically an adaptation of the infamous 1870 Austrian novel by Leopold Von Sacher-Masoch, a slim novel which already uses this structure within in its own narrative (and of interest and mention in the play, the author’s name is where the term masochism is derived). Such a heady, influential text of classic literature is mined wonderfully for modernization by Ives’ play, which examines the innate misogyny and exploitation of the classic text through surprising feminine agency. Gender politics blend seamlessly with the male dominated world of the theater, skewering perceptions of masculine and feminine, director and actress.

We can add another dizzying layer to the dynamics by examining the film from outsides its confines as well—Amalric is basically a look alike/stand-in for Polanski, further complicated by the presence of Seigner as Polanski’s real life wife and actress. Polanski is like Sacher-Masoch, at the helm of a fantasy depicting a protagonist being mercilessly manipulated by the fantastical embodiment of a hopelessly alluring femme fatale.

Accompanied by Alexandre Desplat’s expert score, we enter the film zooming with the camera down a chilly, wintery street, which is as theatrical as an opening as something from Tales from the Crypt. We drift over the comedic posters for the recently ended Belgian production of a musical version of Stagecoach, and thus remain inside the sacred doors of the theaters where a bemused Amalric spars wonderfully with a versatile Seigner, an actress too often stuck in the shadow of her infamous husband’s career (though check out her sterling turns in recent fare like Ozon’s In the House or a supporting role in Skolimowski’s Essential Killing). Polanski gives her the ultimate gift here and she nearly eats Amalric alive, and she radiates a sort of delightful, monstrous glee, with cat like eyes peering from those cheekbones that have only become more strikingly prominent over time.

Seigner’s role demands precise timing, calling for an agile ease that allows us to follow the quickly turning dynamics as well as hide just what it is she’s playing at. She nails every minute of it, fooling us at first into thinking this would be another broad and obvious stab at the machinations of the theater. As for Polanski, add Venus in Fur to his successfully staged adaptations of intriguing theatrical productions, such as Macbeth (1971) and Death and the Maiden (1994). More, please.

Reviewed on May 25 at the 2013 Cannes Film Festival — MAIN COMPETITION.