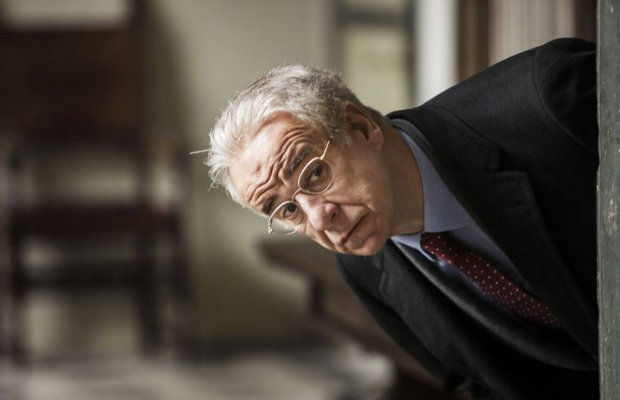 Dead Ringers: Ando’s Self-Adapted Switcheroo a Highlight for Servillo But Little Else 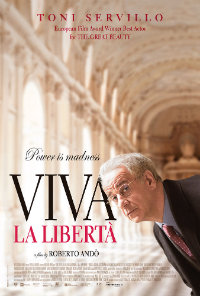 Politics and doppelgangers have hewn a surprisingly wide berth throughout decades of cinema, used as a convenient trope to entertain as a simple metaphor (though eventually, it would be nice to see what this is going to look like when cinema starts taking depictions of female leaders seriously). For Viva la Liberta, or rather, Long Live Freedom, directed by Roberto Ando from his own novel, we have Italian actor Toni Servillo in prime form in dual roles as a pair of yin and yang twins (the only colors they seem to come in when portrayed by the same performer). As a testament to Servillo’s droll talents, it’s often pleasurable to see him at work in Ando’s unwieldy statement about current political affairs in Italy, as the film lacks finesse in nearly every other regard, both in a narrative sense and how it realistically portrays its scenario and the lives affected peripherally.

Enrico Oliveri (Servillo) is the secretary of Italy’s left wing opposition party, though which seems to be in dire circumstances from outside as well as within. Exhausted from daily attacks on his relevance and achievements with the party, Enrico suddenly disappears to France to hole up with an ex-girlfriend from his youth (Valeria Bruni Tedeschi), who is now married to a famous film director (Eric Nguyen). While he bonds with their charming young daughter, his adviser Bottini (Valerio Mastandrea) is forced to pick up the pieces in a panic, contacting Oliveri’s twin brother Giovani (Servillo), recently released from a mental ward and on anti-psychotic meds. The brothers haven’t spoken in 25 years, so they obviously aren’t on the same wavelength in the political arena. But since no one knows where Enrico is or how long he will be gone, they take a gamble on the madman. What’s the worst that could happen?

In many ways, Viva la Liberta resembles Ivan Reitman’s 1993 comedy Dave, in which a president played by Kevin Kline dies of a heart attack in the middle of an extra-marital tryst, and an identical double (also Kline) is dispatched by the Secret Service to stand in until the powers that can be can figure out how to manipulate the scenario in their own favor. Of course, the double arrives with a fresh perspective that turns the administration on its head and jumpstarts a gasping train into a smoothly running machine. Ando does virtually the same thing, railroading the exhausted Enrico into nostalgic isolation while his twin Giovanni, recently released from a mental hospital following a breakdown, bemusedly turns interest in the lagging left-wing opposition party around. This would be all fine and dandy if Ando gave us a clearer picture of what the political arena actually looks like (in a conversation with Tedeschi’s child, Enrico is compared to Obama as opposed to Sarkozy). We are only led to understand that Oliveri is the secretary of the opposition but has seemingly failed his duties.

In the day and age when information about celebrities and political leaders is freely available to all, it’s unfathomable that Enrico could simply abscond to another country to hole up with an ex-girlfriend who also happens to be married to a significant film director of great renown. And it’s a disservice to the Italian press to suggest that not one journalist would have bene able to discover that Enrico has a mentally troubled twin, which would easily explain the secretary’s reappearance as a significantly changed man. But this is the prince and the pauper metaphor at play, so we simply have to swallow this and run with it. But supporting players are treated with equal short shrift, and it would’ve been nice if Ando could have lead us to believe that there was something alluring about the non-entity played by Valeria Bruni Tedeschi to explain why a famed politician and film director would take such magnanimous fancy towards her.

Valerio Mastandrea feels underutilized as well, typically in the role that serves as the wise foil to the shenanigans of the masters he serves. And so we’re left with Servillo, entertaining as the supposedly psychotic soothsayer twin, and painstakingly earnest as the party secretary. All’s well that ends well, as these things often go, but we’re left without much by way of catharsis, enlightenment or even the easy romantic redistribution that generally cap these sorts of tales.