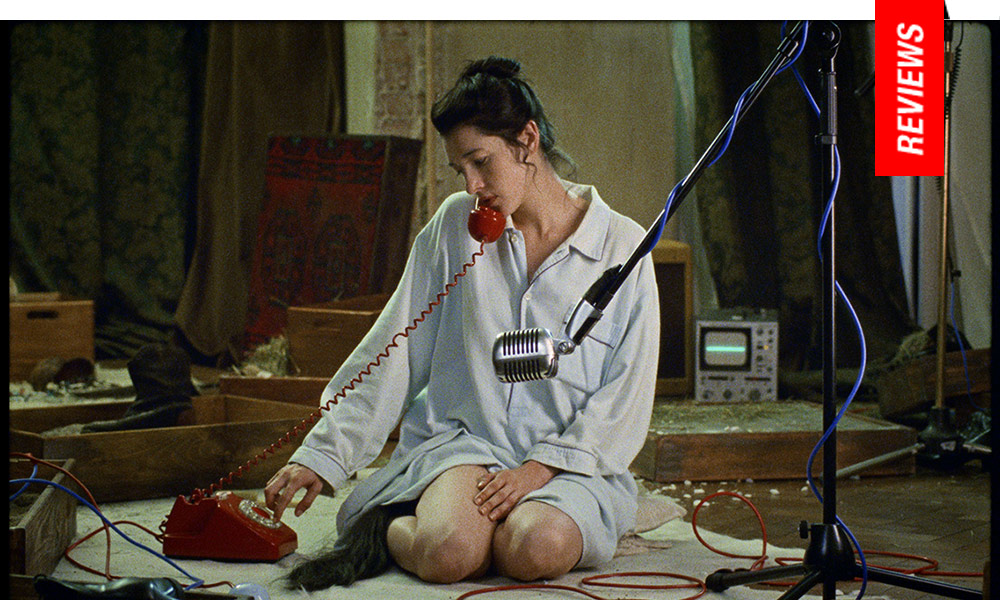 What is it about horses, exactly, and their tacit parallels with subterranean conduits of human sexuality? Sans the inevitable descent into the uncomfortable subject of bestiality (should such subconscious yearnings for the steed ever be acted upon), the anthropomorphism of humans (particularly women) mutating into horses is a common occurrence in metaphorical narratives.

Often resulting in sexual liberation, Ann Oren’s arresting debut, Piaffe, dives headlong into allegory. Titled for the dressage movement in horse training exhibition where the rider sits atop a horse while essentially trotting in place, Oren quickly assumes the Kafkaesque position when her protagonist embarks upon a strange transformation instigated by an occupational catalyst. A fantastical homage to the magical attributes of cinema and the untapped eroticism lurking within our primordial brains, Oren constructs a hypnotic exercise of metamorphic hedonism.

Eva (Simone Bucio) is forced to take over a work assignment as a Foley artist (the recreation of sound during post production) for a pharmaceutical commercial while her sibling Zara (Simon(e) Jaikiriuma Paetau) recuperates from a nervous breakdown. Reclusive and unsure of herself, Eva’s first attempts at recreating the sound of a horse’s hooves proves to be faulty. However, the more she immerses herself in the footage, the more she becomes sensually invested, and soon begins to grow a horse’s tail. As the tail evolves, sprouting a healthy mane of hair, Eva begins to explore the neon lit nightlife of Berlin, embarking on a sexually charged relationship with a botanist (Sebastian Rudolph) who appears to satisfy the role of the rider to her transmogrifying horse.

There are strange parallels to Jordan Peele’s Nope considering the starting place of two siblings struggling to maintain a floundering family business intricately defined by their relationship to, at least in this instance, horses. Many a filmmaker has paralleled a subversive shuffling of power hierarchy with women and horse riding, like the aptly named Of Girls and Horses (2014) from Monika Treut or Patricia Mazuy’s more straightforward 2011 title Of Women and Horses (read review). But Oren exists in a more bizarre universe, like Peter Shaffer’s infamous Equus (adapted by Sidney Lumet in 1977).

Eva’s sudden sprouting of a horse tail carries with it a taboo fascination which has been conjured across cultures, like a character in Katherine Dunn’s Geek Love or the woman at the center of Ivan I. Tverdovsky’s Zoology (read review). Eva’s trans sibling, Zara, is almost a primer for her physical manifestation, and X-rays of her new appendage suggest a reversely placed phallic symbol, further challenging notions of binary gender roles and enhancing the fluidity of sexuality alongside an evolving human form. Eva’s initial inability to correctly conjure the sounds of the horse hooves for her commercial assignment also suggests she’s imbalanced, the sound correction made possible by her embracing of her body.

Oren film shimmies into a trance state as Eva begins a journey of sexual submission with Sebastian Rudolph’s botanist, enhanced terrifically through the pulse pounding electro club beats of VTSS’s “Atlantyda,” where Eva eventually assumes the titular position (with Zara returning in an attempt to bring her back to herself). It’s a splendid showcase for Bucio, who previously starred in Amat Escalante’s provocative, psychosexual exercise The Untamed (2016).

Lensed by Carlos Vasquez, Piaffe plays with a variety of film textures, suggesting the blending of aesthetic itself allows for psychological and sexual exploration, and is a prequel to Oren and Paetau’s award winning short “Passage” in 2020. The creative intersections are also evident with Oren’s co-writer, Thais Guisasola, whose previous narrative The Whisper of the Jaguar (2018), co-directed by Paetau, similarly explored idiosyncratic spirituality when an artist who dies after penetrating herself with transgenic corn has her ashes carried by her sister through the Amazon. How the human body and mind have evolved alongside our tampering with both the environment and our visual reproduction of it seems to be at the core of Piaffe, an enigmatic journey of psychoactive possibility. Perhaps her human kingdom has been exchanged for a horse.