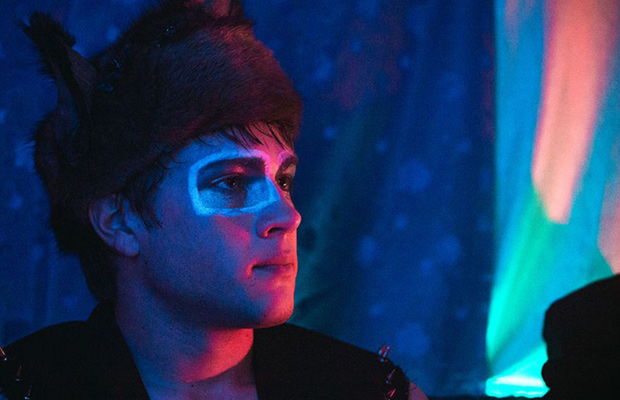 Epistemology of the Closet: Dunn’s Impressive Debut a Pronounced Portrait of Agitated Angst

Notable short filmmaker Stephen Dunn (Pop-up Porno, 2015) makes an impressive feature debut with Closet Monster, a film easily classified as a coming-of-age/coming-out drama but augmented by a masterful sense of tone and visual authority. As ambient as a thriller but without the frills of genre as metaphor, you’d be hard pressed to recall a recent cinematic endeavor that so vividly and compellingly relates the modern queer teen’s terrified angst so effectively. Grappling with familiar yet nevertheless pertinent issues in regards to the heteronormative machinations LGBT youth struggle to navigate, the Canadian helmer unveils an original and moody psychological portrait of agonized adolescence.

Oscar (Connor Jessup) is an aspiring special effects make-up artist finishing up his last year of high school in small town Newfoundland. Hanging out with his friend Gemma (Sofia Banzhof), who shares similar dreams of breaking out in New York, Oscar’s only other potential outlet is conversing with his pet hamster, Buffy (voiced by Isabella Rossellini). But there are dangerously unresolved issues with Oscar’s divorced parents, including a father he can barely stand (Aaron Abrams) and a rather disinterested mother (Joanne Kelly), who started a new family over a decade prior. Wilder (Aliocha Schneifer), a new co-worker at Oscar’s department store day job, sparks Oscar’s interest, and he’s forced to reconcile his burgeoning sexuality with the conditioned resistance caused by traumas from his youth. As his fantasies about Wilder deepen, so do some severe psychosomatic symptoms.

One of Closet Monster’s more intriguing feats is the overall presentation of Oscar’s character—he’s sometimes quite unlikeable—a bratty, spoiled kid. But he’s written as a complete character, warts and all, a rarity amongst portraits of queer youth struggling to overcome the pressure of the majority. It’s a testament to the strength of Dunn’s film that he never compartmentalizes Oscar, a human worthy of empathy yet not without significant faults. Relative newcomer Connor Jessup gives a naturalistic performance, and even with Dunn’s offbeat tactics, contrivance is easily avoided. Instead, Dunn slowly coils us into Oscar’s dramatic tension, wetting our feet in the powder keg that is Oscar’s home life, including an emotional black hole of a father (a well-played Aaron Abrams) and an absent mother.

If there are any significant fault with Closet Monster it might be the narrative neglect of Oscar’s mother, especially since her character is required in some last minute emotional heavy-lifting, and we never get a sense of his time split between these two environments (the absence also limits Joanne Kelly’s presence quite a bit, who commanded this year’s earlier indie release, Runoff). As the mop-headed love interest, Aliocha Schneider seems ripped from a Xavier Dolan feature, while Sofia Banzhaf as the cast-aside best friend manages to be believable and low-key.

Dunn reflects the modernized climate of homophobia quite effectively, and he builds a rather impressive visual portrayal of the psychological baggage informing the coming out process, like the incredibly violent hate crime (once a taken-for-granted occurrence relayed via euphemism in the media) torturing Oscar’s development as a sexually fulfilled being. Shame, guilt, and the specter of violence haunt the frame, and there’s a palpable menace to Closet Monster, oddly and delightfully enhanced by the strange relationship Oscar has with his hamster Buffy, voiced by the iconic Isabella Rossellini. This creates an eerie juxtaposition with the gruesomely inventive body horror Dunn includes revolving around the introduction and fears of anal sex, something rarely explored with such finesse.

The state of queer narratives in indie film often have trouble pandering to too many disparate ideals, selling soft to break out of niche markets or selling hard to an exclusive audience base, often resulting in monotonous formula. The inclusion of his relationship with Buffy is similar to Spanish director Marcal Fores’ 2012 title Animals, in which a troubled gay youth corresponds with his Teddy Bear. But as far as tone, Closet Monster recalls the 2008 film Dream Boy from director James Bolton (and starring Max Roeg, son of the famous auteur) at least as far as a persistently memorable ambience.

Dunn’s achievement is assisted by what may be one of the best soundtrack compilations this year. Beginning with a thwap of Ladytron’s “Ghosts,” Dunn utilizes a pleasurable array of electronic beats, including Canadian talents Allie X, Austra, and German composer Nils Frahm (who provides the soundtrack for Sebastian Schipper’s beautiful film, Victoria, 2015).