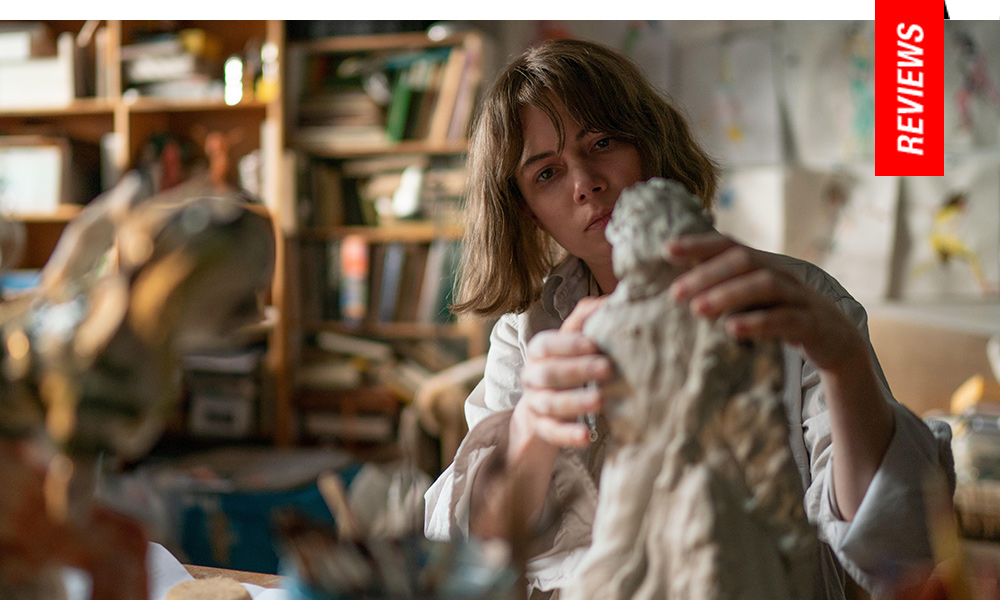 Bird is the Word: Reichardt Returns with Warm Portrait of Art and Ennui

To some it may seem too slight and to others just right, but there’s no mistaking the sublime craftsmanship of Kelly Reichardt in her eighth film, Showing Up. Her fourth collaboration with Michelle Williams spans one week in the life of a sculptor consumed by the anticipation of an upcoming opening of her work in Portland, Oregon. Aggravated by life’s distractions, her own self-criticism, a noticeable jealousy with some of her art school rivals, and guilt over an injured pigeon, her barely contained disdain infects her surroundings. A strikingly reticent Williams carries the film on her shoulders in ways lightly comedic as well as downright melancholic, aided by a handful of surprisingly effective cast members who coalesce into a melange of Reichardt’s motifs for the finale.

Lizzie, a sculptor who works as a secretary at Portland’s Oregon College of Art and Craft, is a week away from having a showing of her work. Inviting less than enthusiastic family members, including her father (Judd Hirsch) and her mother (Maryann Plunkett), who is also her boss, Lizzie finds herself drawn into all sorts of distractions when she needs to be putting the final touches on several of her pieces. She hasn’t had warm water for a while, and her colleague and landlord Jo (Hong Chau) has her own upcoming showings to fuss about, so there’s no chance of a new water heater in the near future. When her cat Ricky mauls a pigeon in her bathroom, she tosses it out the window to die, but Jo discovers the bird and insists they nurse it back to health. Reluctant to do so, Lizzie feels some residual guilt about her treatment of the bird, and thus, this becomes the new distraction consuming the time she really needs to focus. Luckily, an affable artist in residence takes a liking to Lizzie, who doesn’t seem to believe it.

Inevitably, Williams’ latest stint with Reichardt will be compared to their previous three productions, but her mousy characterization of Lizzie is gloriously uptight and incredibly satisfying. Seemingly having lost the ability to smile, she’s mired in self doubt, combatting a feeling of invisibility, the reasons of which are ultimately revealed based on her relationships with family and self-consumed colleagues. Her barely contained dislike for Hong Chau’s Jo, a landlord and arguably more successful cohort, is somewhat warranted seeing as Jo isn’t exactly responsible for tending to needs not directly associated with her own craft.

One gets the sense they used to be friends, but Jo’s incessant pluckiness and Lizzie’s supreme passive aggressiveness makes a recipe for mutual hatred. Symbolized in the animal realm are similar opposing forces, with Lizzie’s cat Ricky (a scene stealer) gnawing on the unlucky pigeon she chucks out the window, and Jo, also driven to distraction, deciding to be its savior. This becomes a joint venture Lizzie disdains and then embraces, seeking redemption through her sudden care for the stressed out bird.

Some stellar character work from Maryann Plunkett as her detached mom and Judd Hirsch as her lonely father (who has taken in a pair of drifters from Canada played by an amusing Matt Molloy and Amanda Plummer) explains some of Lizzie’s background. The film becomes overcast suddenly when Lizzie visits her older brother Sean, with Reichardt alum John Magaro playing a depressed sibling with some increasingly severe mental health issues—-mostly excused by his mother’s insistence he’s a misunderstood genius.

As members of the staff, James Le Gros, another Reichardt regular, makes an appearance, and Andre Benjamin (who also gets a credit for playing the flute in the soundtrack) is a warm, affable accent who’s one of the few seemingly supportive of Lizzie’s work at the school. Shot by Reichardt’s regular DP Christopher Blauvelt, Showing Up utilizes residential Portland as a lovely, quaint backdrop, and one can almost smell the foliage in the summer humidity.

But the best bits are when Lizzie corresponds with her cat, the only creature who might really know what she’s like because she at least has the honesty to share her feelings. “You’re ruining my workday,” she grumbles at Ricky’s mewling because she doesn’t have any food in the house. Though the emotional explosions and narrative arc is slight, everything comes together for a classy melange at the art opening, where the bitterness and sweetness exist side by side.