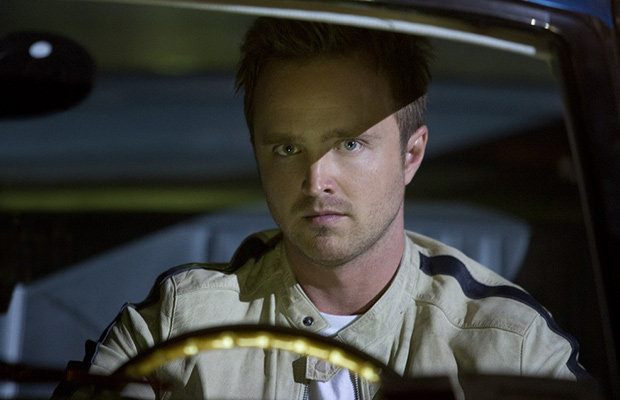 On the Road Again: Waugh’s Woeful Film an Offending Lemon

Leaving behind the galvanizing propaganda of his Navy SEALs plugged film debut, Act of Valor, director Scott Waugh turns to the EA video games inspired action effort, Need for Speed, featuring poster art that promises the vacuous action frenzy that those disappointed in the art-house beauty of Drive were so monotonously seeking. Moviegoers intent on getting their chuckles from glossy actions sequences, like elaborate car chases and shit blowing up everywhere, may find some solace in this charade, but even those high octane thrills feel comparatively lackluster (one has to laugh at the homage to Bullitt, which is shown playing at a drive-thru in the lengthy set-up, a classic that features one of the best car chase sequences ever put to film, of which this film can’t compare).

Waugh has a penchant for sacred homosocial spaces, and, as is customary in hypermasculine explorations of these spaces, homophobia or misogyny generally exists as a twin staple. Waugh and screenwriter George Gatins infuse plenty of the latter in this buddy-cum-road-trip-romance that features a lot of silly people making dumb decisions that hurt or maim innocent bystanders in the honor of driving cars really fast wherever they want.

Tobey Marshall (Aaron Paul) runs his family’s auto ship in Mount Kisco, getting his kicks out of racing in the underground street circuit with his pals Benny (Scott Mescudi), Finn (Rami Malek), and Joe (Ramon Rodriguez), who all work for Tobey and orchestrate the behind the scenes logistics of his racing. An old flame, Anita (Dakota Johnson), returns from the New York City with Tobey’s old nemesis in tow, Dino Brewster (Dominic Cooper), who wants to offer Tobey a lucrative offer to soup up a car for racing, which ultimately leads to Anita’s younger brother and Tobey’s best friend, Little Pete (Harrison Gilbertson) dying tragically due to a reckless mistake on Dino’s part. But, since Dino’s rich, Tobey takes the rap for his friend’s death and spends two years in prison. Upon release, he seeks vengeance by getting Julia Maddon (Imogen Poots) to acquire the car he’d built for Dino and race from New York to California and get the attention of Monarch (Michael Keaton), who hosts a prestigious (and secretly located) race called the Deleon. If Tobey can snag an invite, he can enter the race against Dino and exact his vengeance.

Credited as a film that glorifies the notion of honor, friendship, and loyalty, all whilst revisiting the vintage stylings of 60’s and 70’s “car-culture” cinema, it’s safe to say that Need For Speed fails on all counts. Whatever Waugh is trying to evoke, his attempts to distance himself from the video game template by fleshing out his narrative with soapy dramatics devolves into a strings of flashy events and useless supporting characters that serve to waste time rather than develop or further the plot. Instead, the bloated running time only serves to exemplify the ridiculousness at hand. How exactly are his little sidekicks keeping up cross country—and why do they blindly follow? Did his ex-girlfriend really never suspect that Tobey was innocent? Why didn’t Tobey just have Anita look into the whereabouts of the missing sports car earlier?

Of course Aaron Paul is the biggest asset here, but this bid for proving his leading man capability feels ill-advised as his Tobey Marshall plays like a macho idiot overcompensating for his stature by using a big boy Batman voice and making decisions that should call into question the possibility of his having any common sense. Instead, these are all aspects that we’re supposed to believe make him seem lucrative to a gorgeous and intelligent young woman that looks like Imogen Poots, whose onscreen charm can’t make you forget how utterly irritating her character is (sure, she gets her own driving sequence but her skills, ultimately, lead to one last cheap joke by the film’s end).

Worse are the stagnant supporting characters, like the contrived Benny, ludicrously showing up in numerous aerial contraptions, or Finn, who gets naked and forces a kiss on an attractive female co-worker before walking out on his job to follow Tobey in his quest for vengeance. Perhaps most grating are Michael Keaton’s exuberant interludes as the man behind the curtain, orchestrating his white collar entertainment for blue collar folly. But in the end, we’re discussing a film based on a video game, so perhaps the joke’s on you if you go in expecting water to be squeezed from rocks.