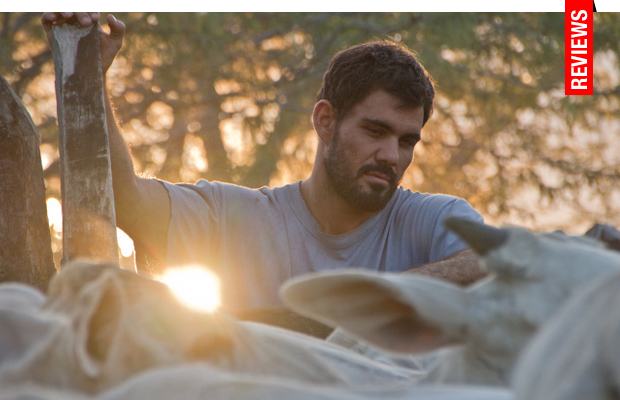 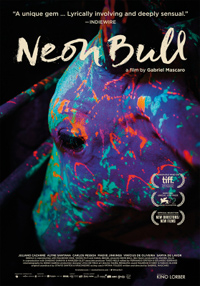 For his sophomore directorial effort, Brazilian filmmaker Gabriel Mascaro examines a strange universe through his own unique and utterly captivating fabrication with Neon Bull. A portrait of the exhibition sport known as vaquejada, wherein cowboys attempt to throw bulls to the ground by their tails, Mascaro keeps a notable distance from the milieu, to such an extent we rarely see its main characters in close-up. The striking imagery often unfolds with the objective precision of documentary format, a tone enhanced by Mascaro’s free forming narrative, which basically revolves around the blighted dreams of its central character. But the end result is something much stranger and enigmatic than any of these descriptors can possibly capture, and Mascaro flutters between moments of meditative observation and bizarre nighttime proclivities with instances as equally lurid as they are supremely beautiful.

Iremar (Juliano Cazarre) is a handsome cowboy whose main role is to chalk the bulls’ tails before they enter the arena. His other duties run the gamut of manual labor associated with caring for the animals as well as all the travails of travel associated with such ventures. But his real dream is to design exotic clothing for women, a passion he is able to pursue with his colleague Galega (Maeve Jinkings), who wears his designs at strange events. It’s clear they have a sexual history, though he’s not the father of her outspoken pre-teen daughter Caca (Aline Santana), a girl very vocal about her displeasure with their lumpy colleague Ze (Carlos Pessoa). When a strange course of events finds Ze replaced by the fair-haired Junior (Vinicius de Oliveira), Iremar and Galega’s increasingly familial relationship seems to cool completely, leading him to titillating interactions with traveling perfume saleslady Geise (Samya De Lavor).

As far as the juxtaposition and eventual collapsing of mankind with his animalistic tendencies, it’s difficult to recall a point of comparison for Mascaro’s Neon Bull. In certain ways, its observational approach recalls something like Aaron Schock’s 2010 documentary Circo, which follows a Mexican circus troupe that’s been performing on the road since the 19th century. But the expressive mix of man and beast’s sexuality, calling upon pheromones and the collection of reproductive fluids, actually seems reminiscent of Walerian Borowczyk’s Eurotrash calling card, The Beast (La Bete), a 1975 bestiality provocation of the famous fairy tale which opens with vivid horse copulation.

Mascaro’s progressively extensive scenes, often filmed in one shot, eventually culminate in what will undoubtedly be included in future lists of most alluring cinematic sex scenes between Cazarre and a very pregnant Samya De Lavor. Provocative and sensual, the sequence is allowed to unspool organically and helps solidify the film’s ability to remain nothing short of utterly fascinating.

Cazarre, a well-known Brazilian actor who appeared in Jose Padilha’s Elite Squad (2007), Fernando Mereille’s 360 (2011) as well as Fernando Coimbra’s 2013 film Wolf at the Door, is commanding as the film’s central focus, and like the other professional cast members, manages to actually seem part of the landscape Mascaro depicts rather than engaged in ‘performance.’ Maeve Jinkings, also a rising Brazilian star thanks to turns in films from Marcelo Gomes and Kleber Mendonca Filho, is equally ordinary as a struggling single parent raising an increasingly petulant daughter amidst modeling Iremar’s exotic outfits while donning, of all things, a horse mask and hoofs.

Strange and beautiful, Neon Bull announces Gabriel Mascaro as a major talent of note amongst a growing community of Latin American auteurs.