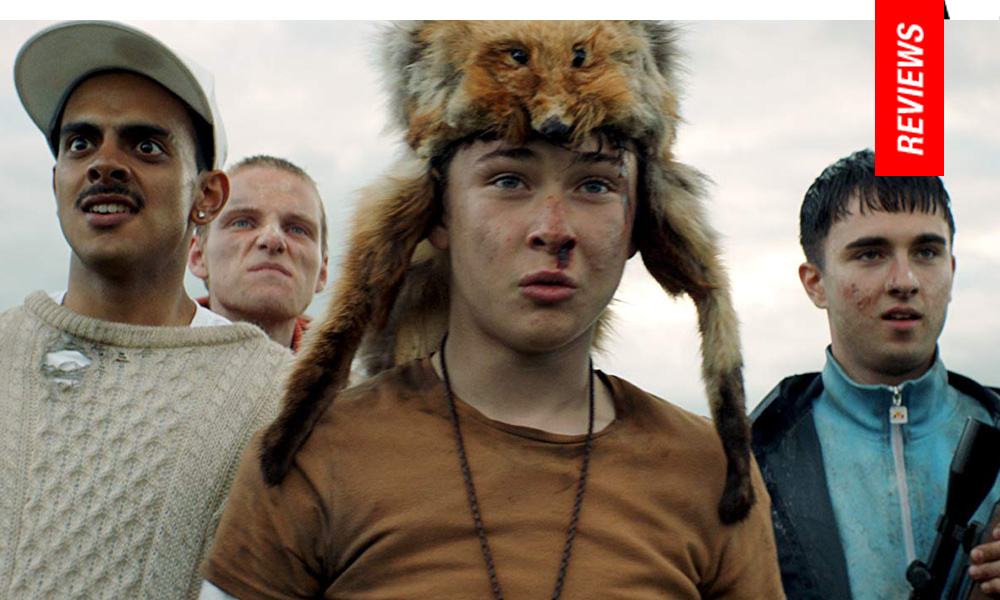 Scottish music video-director Ninian Doff offers an uneven but hilarious debut with Boyz in the Wood:  a bonkers action-comedy in the style of Edgar Wright, disguised as a full-tilt horror fest. In keeping with its chuckle-worthy title, Doff’s film is hit-or-miss silly, but when you swing for the fences, the hits are all home runs. Just when you think vapid jokes are all this genre-bender has to offer, it veers into uproarious territory, with inter-generational, inter-class profundity lurking under the surface: pious Baby Boomer villains are pitted against hapless Gen Zs; landed gentry are out to annihilate jobless street punks.

Three delinquent teenagers—plus one goody-two-shoes—embark on a hike through the Scottish Highlands: a team-building exercise designed to win them the “Duke of Edinburgh Award.” The wanna-be boy scout is Ian (Samuel Bottomley). His companions are brash, dimwitted Dean (Rian Gordon); even brasher, more dimwitted Duncan (Lewis Gribben); and the self-conscious, aspiring rapper “DJ Beetroot” (Viraj Juneja), who promptly uses a critical section of Ian’s map to roll a joint. (None of these guys is popular in school, and it’s clear why.)

In pursuit of the boyz is a spooky, masked gun-toter known as “the Duke.” We almost hope he prevails, but as the film grows increasingly darker, their appeal grows:  humor crescendos as they’re forced to attempt—and fail miserably at—survival. Side characters keep the comedy afloat, including the quartet’s adult sponsor (Jonathan Aris); inept local police (Kate Dickie & Kevin Guthrie), more interested in tracking down a bread thief than terrorists; and most outrageous of all, a group of long-in-the-tooth, drug-crazed farmers who become unlikely fans of DJ Beetroot’s music.

Boyz in the Wood truly shines as a greatest hits of music video styling:  from the creepy masks of the “Dukes” to both practical and impractical VFX, the film literally ripples with originality. Doff delivers psychedelic drug-trip-montages—a thinly-veiled excuse to utilize tricks from his music video days—to hilarious effect, conjuring belly laughs when farmers’ heads inflate to the rhythm of Beetroot’s hip hop jams. The writer/director also has a blast toying with movie logic for comedic effect: anti-foreshadowing moments that upend horror tropes; a hysterical Scooby Doo-unmasking gone-wrong; an unforgettable gag with a runaway van. By the end of the saga, viewers may feel compelled to roll spliffs out of their own favorite atlas. Plus, no offense, but— Everything’s funnier in a Scottish brogue.

Unfortunately, Boyz in the Wood lacks consistency. Standout moments of ingenuity underscore aspects that don’t work: cardboard villains; caricatures in leading roles; an overall lack of urgency. Last-minute character growth is so unexpected that it comes across as a joke. Fortunately for us, however, Boyz in the Wood knows its place:  yes, it falls short of the In Bruges mix of black comedy, thrills, depth of character—but as a late-night laugh fest, it delivers. The SXSW Audience Award speaks for its cult potential, and for Doff’s future as a director.