Do You Know Where You’re Going To?: Ganatra Gets Off-key with Recycled Formula 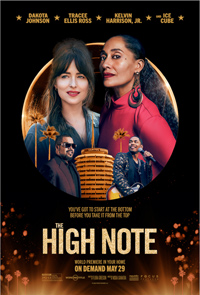 Same shit, different day could have been a potential tagline for The High Note, the fourth feature from director Nisha Ganatra, which treads a similar pattern of racial intersections as concerns women in the entertainment industry akin to her 2019 breakout Late Night. Despite the inspired casting of Tracee Ellis Ross as a fading pop diva, Ganatra’s latest, based on a script from first-time scribe Flora Greeson, chooses an archaic refrain rather than embracing the diverse possibilities of those assembled on its mainstream platform.

While it shines a necessary light on the difficulty faced by women, especially women of color, to attain or retain agency and equality in any industry, it’s prizing of a white, privileged perspective cancels out its potential. Six inches forward, five inches back, it’s a film which attempts to progress a conversation with blinders on rather than the laying of the hands suggested by its casting.

After working for three years as an assistant to the famous singer Grace Davis (Tracee Ellis Ross), Margaret (Dakota Johnson) at last finds an opportunity to flex her skills as a would-be music producer when she creates a cut of the artist’s upcoming live greatest hits album. As luck would have it, she also discovers a talented singer in a grocery store parking lot, David (Kelvin Harrison, Jr.), and begins producing a project with him, though she’s unable to determine his reluctance considering he doesn’t seem to want for anything financially. Just as Margaret’s schemes seem to be paying off, Grace fires her over a bungled reception for her upcoming album, only to later realize Margaret’s skills have inspired her to make her first new music in over a decade.

What seems most curious about The High Note is how similar its narrative structure is to 1988’s Working Girl, the break-out role for Johnson’s mother, actress Melanie Griffith—the Mike Nichols classic even uses a similar plot twist involving sharing a man with her nemesis, the manipulative boss play by Sigourney Weaver. However, Johnson’s Margaret is portrayed, almost to flabbergasting excess, as a silver-spoon-in-mouth white woman ignorant to how her own goals and success are determined by her desire to manipulate black artists to do so.

One wonders how the film would have played if Greeson’s script had been allowed to evolve once its casting dynamic had been determined—as it stands, the effervescent Ross is only allowed one brief moment to voice her concerns as a black woman over the age of forty in a white, youth-obsessed industry. But even this moment plays like lip-service as it’s never revisited, and a closing shot triumph for one of the film’s characters remains foreboding for the future of the (racial) other. These aren’t the film’s only issues, which include a late-staged twist and wanly attenuated romance involving Kelvin Harrison Jr. (a welcome but wasted presence), a tacked-on comedic turn from June Diane Raphael (a welcome but wasted presence), an ornery but pragmatic manager played by Ice Cube (a welcome but wasted presence) and a cameo from Eddie Izzard (who is somehow supposed to be the replacement act for Arianna Grande).

The film’s indecision about what kind of a diva Grace is supposed to be (she’s Miranda Priestley one minute and then Dolly Parton the next in her approach to Margaret) as well as the repeated inclusion of her disco-lite discography seem all kinds of unlikely, with the music as unbelievably oriented timewise as Grace’s vague persona. Still, Ross manages to be a breath of fresh air and even if the film refuses to play with any metatextual references to her iconic mother, Diana Ross, one hopes her charisma, uniqueness, nerve and talent will not go unnoticed in Ganatra’s formulaic narrative feature.