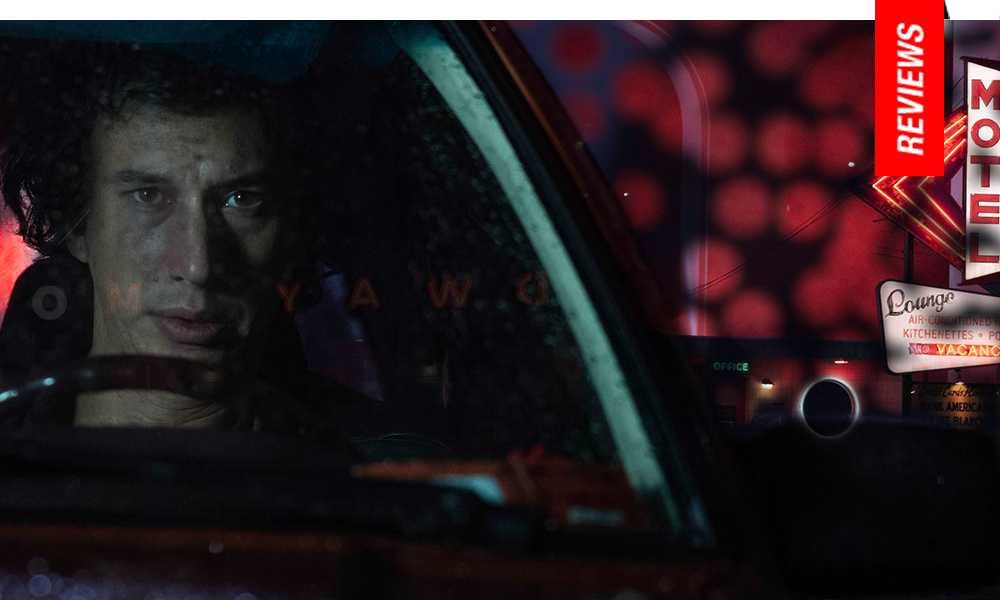 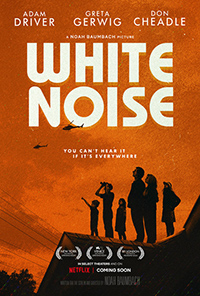 The characters anchoring the existential narrative of White Noise have kindly stopped for death, so consumed with the fear of the inevitable it’s driven them to the point of intellectual paralysis. Based on Don DeLillo’s 1985 novel, which arrived in the middle of the age of excess, Noah Baumbach mounts the most impressive and extravagant rendering of the cult author’s exploration of our modern obsession with consumption yet. But whereas DeLillo’s breakthrough text had the novelty of appearing as satire, Baumbach’s return to the year of the narrative setting has more of the actual pallor of Orwell’s 1984. What was once a cynical cultural commentary feels grimly prescient in an age where bioterrorism, expanding nuclear potential, Russian war criminals, a global pandemic and a despotic American president who made Reagan’s rotten legacy a demure blip have since occurred.

In short, Baumbach regenerates the 1980s as a satirical horror film prologue for today, not unlike the atrocities of WWII infecting and perverting the academic subtexts of DeLillo. A tonally bizarre endeavor which often collapses slapstick and social commentary, Baumbach aims to amuse with a film serving as a nether region where all the peaks and valleys of human emotion have been corroded or numbed. It’s a film where neither laughing nor crying are generated in response to a world where humans hurtle as fast as they can toward death—all the more quickly the more they attempt to rationalize or defeat it.

The famed creator of the Hitler studies program at his Ohioan university College on the Hill, J.A.K. Gladney (Adam Driver), is in a bit of a bind. Though he’s famed throughout the nation for the curriculum he created, he cannot speak German, hurriedly trying to harness a basic grasp on the language with a secret coach before a conference on Hitler will bring a coterie of German dignitaries to town. He’s so caught up in himself he doesn’t seem to realize his wife Babbette’s (Greta Gerwig) increasing forgetfulness, which has caused their daughter Denise (Raffey Cassidy) to investigate, discovering her mom is taking a mysterious new drug called Dylar. Lassoed into assisting his college Murray Siskind (Don Cheadle), who has recently arrived from New York, in establishing his own Elvis Presley studies, life is suddenly disrupted when a train carrying toxic elements is derailed by a gasoline filled tank truck, creating a toxic airborne event which forces the whole town of Iron City to evacuate. Exposure to these elements has Jack convinced he’s now predestined for death, but as the mystery of what Dylar actually is and why Babbette is taking it emerges, death suddenly seems much closer than he’d thought.

“Look past the violence,” Cheadle’s professor coaxes, showing his students a montage of car crashes from American films as the film opens. Underlining the ribald ethnocentrism of the country’s smug posturing of superiority, it sets up the recurring theme hanging like a death shroud over White Noise. Our fascination with crashes, destruction, and bad news is a relief from those pesky ‘complicated’ human emotions as the impact and ensuing carnage ensures relief and reprieve. In the world of White Noise, this is the sweet spot, where facts become a disruption to happiness. In this, and several other moments, including an actual car crash the Gladney’s witness as they unhappily crawl toward a questionable quarantine, Baumbach channels something like David Cronenberg’s 1996 J.G. Ballard adaptation, Crash (and of note, is the only other filmmaker who really served justice to another ‘unfilmmable’ DeLillo novel, the similarly vehicular oriented Cosmopolis, 2012).

Cheadle’s Murray Siskind desires to mount an Elvis Presley course modeled after Jack’s popular Hitler Studies (technically known as Advanced Nazism), the added irony here in a Black man’s reverence for a subject who, whether intentionally or not, actively undermined his culture not unlike the the same suggested political nexus going on with the US and Germany throughout. The correlation between the two arrives in one of Baumbach’s best staged sequences, with Jack co-preaching at one of Murray’s seminars, citing the mob scene connection inspired by both these men channeled our inherent drive towards death. Another sequence is perhaps more succinct in Jack’s lectures, positing all ‘plots’ are a path toward death—never mind a more base correlation with how a plot demands time to unfold, and as time unfolds, we invariably march toward each of our own expiration dates (much like sitting through the plot of White Noise has furthered our own timeline towards whatever one’s own end date may be). But then this is the overall point of the narrative, our inane, sometimes addlepated dive into the busyness (and business) of life so we can distract ourselves and deny looking into our own personal abyss. Both Babbette and Jack, who have each been married three times previously, desire to be the spouse to die first. To be alone and contemplate life is worse than death. And yet, the only reprieve we can achieve from the crushing wheel of life’s expectations is through disruption or disaster. Says one woman holed up in the camp ground quarantine alongside the Gladney’s, the event offered her a necessary respite. 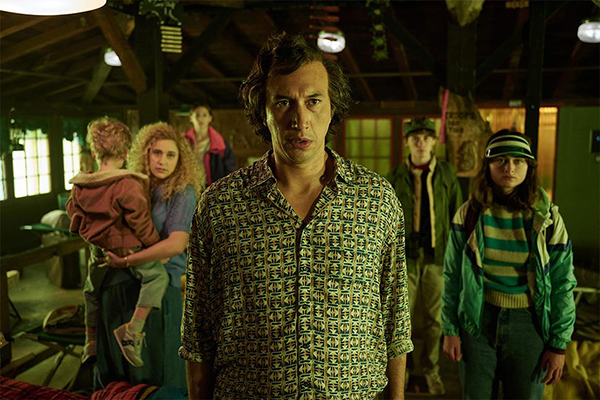 Baumbach hews quite closely to the events in DeLillo’s novel, with a few marked exceptions which heighten some of the text’s happenings, including a sequence which makes the Gladney’s seem like the academic counterpart of the Griswold family from the National Lampoon films. Things take a dark, Dostoevskian turn when Jack acts on Murray’s theory on extending life, which perhaps means taking the lives of others, like some kind of vampire, in order to extend one’s own. Taking lives also, just maybe, allows a hypothetical immortality through infamy. And it’s in the extended third act where Baumbach’s jaunty energy wallows, with Babbette’s reveal about her mother’s little helpers, experimental pills given to her by a man to stave off her ennui in exchange for sex.

A culmination of German tangents (Lars Eidinger and Barbara Sukowa both make appearances) are highlighted in events which appear unevenly cartoonish, despite Baumbach and DP Lol Crawley throwing themselves into De Palma territory in a beautifully shot hotel room sequence. Danny Elfman supplies a playful, unobtrusive score (perhaps most evident at the beginning of the film’s chapter segments), and LCD Sound System has a boppy track playing over the end credits, a grocery store musical moment highlighting how the hopeful magic of a fully functional supply chain provides us with just the limbo we need to dive into during the worst of times.

A pot-bellied Driver proves, as he did in Baumbach’s Marriage Story (2019), to be a fascinating conduit for the director. On the other hand, Baumbach’s partner (and frequent collaborator) Greta Gerwig doesn’t quite channel the essence of Babbette, whose physicality is a large part of her persona from the book. Looking as if she’s trying to avoid reprimand in every scene, Gerwig’s performance hovers in a state of constant monotony, defined by her Ann Roth 80s wardrobe and fantastic head of hair, glaringly apparent in her confession sequence where large swaths of explanatory dialogue tend to feel overly rehearsed.

A large supporting cast includes a likable Raffey Cassidy (Vox Lux, 2018), Sam and May Nivola (the children of Emily Mortimer and Alessandro Nivola), and Andre Benjamin and Jodie-Turner Smith (who is always forced to sit at the table all alone opposite her male colleagues) as some of Jack’s colleagues. Ending in the same vein as it began, White Noise is an intelligent, cynical exploration of our self-imposed bliss—-there are those who choose to deal with the imperatives of society and martyrs who carry the gauntlet of tradition or belief so we don’t have to. At the end of the day, what you don’t think about can’t really hurt you.