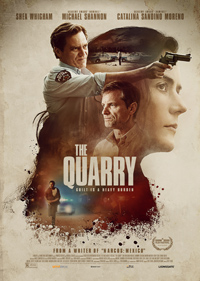 It’s been over a decade since director Scott Teems delivered his warmly received debut, That Evening Sun (2009) an odyssey of Southern dysfunction which featured a stellar Hal Holbrook and took home major prizes at the SXSW Film Festival. Teems was set to return there with his sophomore film The Quarry before the cancellation of the 2020 festival. Perhaps this was a stroke of providence for Teems, whose long-awaited return falters precariously on familiarity and poorly conceived Mexican American composites with this adaptation of a 1995 novel by Damon Galgut.

Teems and co-writer Andrew Brotzman (Nor’easter, 2012) relocate the setting from post-apartheid South Africa to contemporary rural Texas in an effort to universalize Galgut’s specific racial divides. While it’s an inspired idea, Teems and Brotzman unfortunately focus too closely on the dueling leads, a prime Shea Whigham and Michael Shannon (reuniting from “Boardwalk Empire”) who deliver likeable performances in an exercise crippled by good intentions which leave the rest of the cast in the dust.

Rather than be punished for a crime of passion he’s committed, a downtrodden man (Whigham) murders an alcoholic pastor (Bruno Bichir) and assumes his identity by traveling to the small Texas town one David Martin is supposed to take up residence as minister at a defunct church. The townspeople respond warmly to his sermons, attended by the local Mexican-Americans, most who don’t speak English (thankfully one of the audience members provides translation between pastor and parishioner). However, the local Chief Moore (Shannon) is immediately wrapped up in a dilemma involving Mr. Martin upon his arrival in town as the new minister’s vehicle has been broken into with several of his possessions stolen. Chief Moore is able to track those responsible, seizing illegal items and finding evidence of a murder. The new minister must decide to unveil his true identity or let an innocent man pay for his crimes.


We’ve seen countless examples of criminals and con artists masquerading as priests across a variety of genres—everything from We’re No Angels (1989) to Sister Act (1992) and last year’s Corpus Christi, Poland’s well-received Oscar submission, highlight the potential for the scenario.

Whigham, a notable character actor who deserves to lead more projects, is enjoyable as the surly guilt-ridden man who we only know by the moniker of the man he’s assumed the identity of (Bruno Bichir, brother of Demian). Shannon gives a moderated performance as a potentially problematic law enforcement figure who’s romancing Celia (a wasted Catalina Sandino Moreno) behind closed doors, and it’s a surprisingly layered composite considering the lack of effort afforded all the racial others in The Quarry (in fact, it’s the kind of complexity which should have been afforded Shannon’s baddie in the celebrated The Shape of Water, 2017).

As predicted, Whigham’s best laid plans go awry, but the film absolutely bungles the dramatic catalysts. Bilingual characters who freely dip in and out of Spanish have been written to purposefully miscommunicate with Shannon’s determined police chief in ways which are nonsensical—the impetus for Bobby Soto’s Valentin to freely admit to a murder he didn’t commit simply to save his younger brother from the scourge of the law isn’t attempted to be circumnavigated by telling what he knows about the faux minister in the town’s wake.

In short, The Quarry feels demeaning towards its Mexican American community at every turn as the script never handles the transitions with which we feel they would so unquestionably embrace Whigham but distrust Shannon—and leads to an unnecessarily dramatic finale which hobbles the future of its wrongly accused. This might have worked in the parameters laid out in Galgut’s specific novel but Brotzman and Teems don’t properly align the stakes for this to work in this time and place.