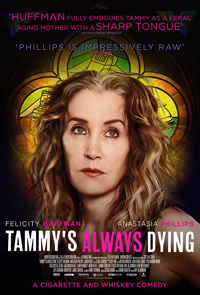 At times touching, if thanks to a highly empathetic turn from lead Anastasia Phillips (as well as a somewhat contained Huffman playing a character which could have been egregiously over-the-top), it’s an interesting if not always entirely successful navigation of trauma and its exploitation which suggests Johnson is an interesting storyteller and another confirmation of Huffman’s abilities despite the highly publicized exploits of recent legal issues which, for the foreseeable future, will be baggage clouding the reception of her work.

On the 29th of every month, when her welfare runs out, Tammy (Huffman) sits on the same bridge contemplating suicide, talked down from the ledge in Sisyphean fashion by her increasingly annoyed daughter Kathy (Anastasia Phillips). As Kathy points out, Tammy’s particular bridge has a net which would negate any real danger if she ever were to jump. Kathy, who works as a bartender, finds small solace with her boss and confidante Doug (Clark Johnson) and has meaningless, rather unfulfilling sex with the married Reggie (Aaron Ashmore), her ex from high school (whose past canoodlings resulted in an abortion Kathy had to pay for). When Tammy is diagnosed with stage four cancer which necessitates moving in with Kathy, a swift unraveling begins. Kathy lies about her mother to get onto a sordid reality television show in Toronto which offers sizeable checks to its guests to share their misery with the world, only to realize it’s clearly not a process designed to assist Kathy’s underlying emotional demons.

If Huffman manages to be realistically down and dirty as the worn-out alcoholic and emotionally manipulative Tammy, Anastasia Phillips succeeds in shouldering the emotional brunt of Tammy’s Always Dying. Although it goes a bit off the rails in the third act, taking nearly an hour to get to its lavish depiction of exploiting trauma of the working class via scripted reality television, there’s arguably power in floating this merely as an idea of equally excessive but empty-headed cultural avenues with which we find it appropriate to ogle and consume the pain of others—at the same time, one wonders if this thread wouldn’t have been more powerful if embarked upon earlier, which would have made it similar to something like Shira Piven’s Kristen Wiig starrer Welcome to Me (2014).

Add to this a somewhat unnecessary side plot involving married mechanic Aaron Ashmore whom Kathy uses for meaningless sex despite the public (and eventually cartoonish) effects this has on his wife (Jessica Greco). The ever-dependable Clark Johnson is a warm accent as Kathy’s boss and confidante, while Ali Hassan as the Dr. Oz/Dr. Phil caricature Gordon Baker is ultimately an icky figment (same for the underutilized Lauren Holly whose job it is to ‘coach’ the show’s contestants).

The incredibly dark finale is a double-edged sword of hope for Kathy but Tammy’s Always Dying leaves her on the precipice of a murky future as a woman who has learned the value of better decisions and stronger convictions—but who she is and what’s she’s all about as a person aren’t really part of the busy mix.