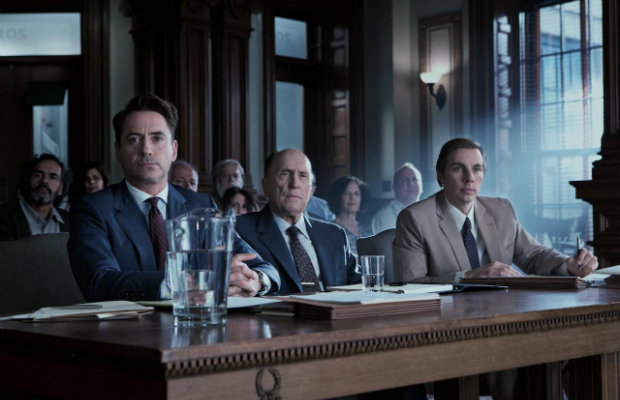 I Never Served Time For My Father: Dobkins’ Middling Melodrama 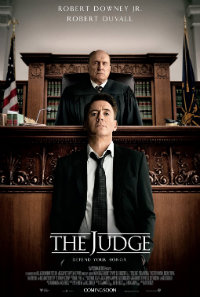 Groaning beneath the weight of its desperate grandstanding for awards consideration, David Dobkins’ The Judge launches a continuous covey of clichés at you as it vacillates between middlebrow familial melodrama, murder mystery, and half-baked courtroom drama. Dobkins is indeed a curious name at the forefront of such material, having rested comfortably in mind numbing studio comedies for the last decade (to be fair, his Wedding Crashers seems to have a sizeable fan base, though the same can’t be said for his last feature, The Change Up, 2011). Not surprisingly, he’s not very adept at crafting this type of material effectively. At a horrendously bloated running time of nearly two hours and twenty minutes, the film could have felt more potentially rewarding sans less cutesy subplots, with a tighter focus on the volatile father/son relationship upon which the crux of the dramatic impact is supposed to hang. But Dobkins can’t seem to abstain from the his brand of jocular broadband, injecting every possible angle with such extreme verve that they all cancel each other out.

An aggressive defense attorney in the middle of an unpleasant divorce, Hank Palmer (Robert Downey Jr.) gets called back to his hometown in rural Indiana after discovering his mother has died. Palmer hasn’t spoken to his father, Judge Joseph Palmer (Robert Duvall) in years. The dislike is visibly mutual at the funeral. But Hank seems close with older brother Glen (Vincent D’onofrio) and younger brother Dale (Jeremy Strong), who is handicapped and still lives at home. Hank also gets the chance to briefly reconnect with his high school sweetheart (Vera Farmiga) before heading off to the airport. But just as he’s about to leave, Glen calls Hank to inform him that their father’s been brought in for police questioning. There was a hit and run the night prior that resulted in the death of a man that Judge Palmer had put away years ago for the murder of a young girl. It looks as if the Judge ran the man into a ravine on purpose. So, Hank must stay behind and try to help his father in court, even though the Judge has already hired an ‘honest’ small town defense attorney (Dax Shepard).

In his first dramatic vehicle since being released from the Marvel shackles, Downey Jr. steps into a role handcrafted for his withering sarcasm. It’s nothing we haven’t seen Downey do already, here a hifalutin defense attorney of considerable talent that knows how to say all the right things at all the right times. And yet, he’s a charismatic enough screen presence to make this watchable. Likewise, an insistently gruff Robert Duvall isn’t without a bit of merit here, either.

The Judge seems a bit more lively during their heated exchanges, though Thomas Newman’s score continuously undermines any believability they sort of come to as estranged family members. A very large supporting cast overextends the screen time as well. A useless romantic subplot involving Vera Farmiga (way too much importance is placed on a Metallica t-shirt and concert) and daughter Leighton Meester crosses into redneck V.C. Andrews lore, but never quite commits to the creepy insinuations. Also, Downey’s shambling marriage and twee daughter could have been excised altogether, perhaps using that screen time to make his handicapped sibling seem less like the comic relief and more like an actual character not reduced to narrative convenience. One gets the sense that these were all great background details needed for the screewriters Nick Schenk and Bill Dubuque to shape Downey’s character, but they should have been either more succinctly developed or phased out as the vague background characteristics that they resemble.

On top of it all, the wet rag of a murder mystery and unbelievably rendered courtroom scenes should have been given greater due process. Dobkins’ employs Grace Zabriskie as the redneck mother of the deceased in a wasted role (not to mention a well preserved Billy Bob Thornton as a declawed prosecutor), a character that should have been allowed to breathe more. Instead, as presented by the filmmakers, there’s never any doubt to her status as unimportant sleaze. And the ‘murder’ is treated like one of life’s great lessons, an opportunity to moralize in a film that artlessly examines notions of integrity and responsibility.