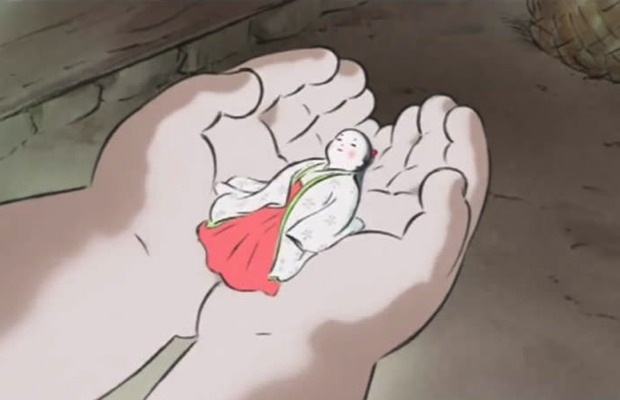 Princess from the Moon: Takahata Bows with Feminist Spin on Fable 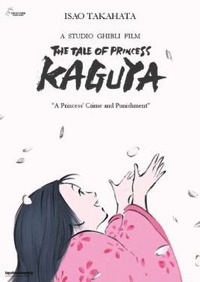 Following the news of Hayao Miyazaki’s possible retirement after the release of 2013’s The Wind Rises, Studio Ghibli co-founder Isao Takahata unleashes his own swansong with The Tale of the Princess Kaguya. Sadly, it was announced that its December release last year was not able to recoup its production budget, leading the famed studio to hint at closing its doors after other recent titles similarly underperformed. The news lends an even stronger taint of melancholy to Takahata’s gently emotional fable that subtly examines class and gender issues with all the painterly finesse of the classic tale it’s based upon.

An old bamboo cutter finds a small princess within a stalk of shining bamboo. Bringing the nymph sized creature home to his wife, it turns into an infant child that displays a rather rapid growth rate. Going back to the stalk for more clues as to her nature, the bamboo cutter finds a host of earthly goods and a bounteous amount of money, which he interprets as meaning that the child is meant to grow into a beautiful princess. So as the bamboo cutter and his wife lay the groundwork for her future, the young girl grows into a beautiful woman, eventually named Kaguya, which means shining light. But with a great title comes great responsibility, and soon she is sought after by the richest men in the land.

If The Tale of the Princess Kaguya seems familiar, it’s because it is based on the Japanese folktale The Tale of the Bamboo Cutter. A somewhat altered live-action version was made in 1987, directed by Kon Ichikawa and starring Toshiro Mifune, returning the princess not to the moon but a spaceship. Takahata’s version isn’t without a certain amount of humor, the bamboo cutter remarking to his wife as the child morphs quickly from nymph to full sized infant, “this is very strange you know,” followed by his elderly wife remarkably gaining the ability to breastfeed. Of course, what becomes innately strange is how the Princess, raised by peasants, must become indoctrinated by rigid social customs, which are always seen as destroying joy and freedom.

As is generally the case, it’s the expressive animation that enhances the tale, here a simplistic fable with an empathetic feminine perspective. Generally highly detailed, moments of bursting emotion or a flurry of action mutates the pictures, meant to incite a textured impression. Takahata actually achieves depth of field, as in one instance where a young man from Kaguya’s past steals from her caravan, dashing in between the spokes of carriages transposed over one another. At another instance a laughing face fades into the center of a spinning wheel, whereas hair flying in the wind often takes on a presence all its own.

Wealth and status bring only unhappiness and despair for the princess, as they are destined to from the moment she arrives in the bamboo cutter’s hands. But it’s the self-sanctioned absurdity of human traditions that seems to really define the exact nature of the Princess’ earthly punishment. To please her Earth parents, she must submit to their zealous whims to grant her the best possible life they could imagine for a princess—something they strangle in their ignorance.

The cloak of forgetfulness placed upon her shoulders as she retreats to her rightful home feels like a metaphor for death, especially considering this is Takahata’s farewell film, which encapsulates a certain element of what the human experience seems like. But this hardly reaches the tear-jerking heights of his most famous title, Grave of the Fireflies (1988). As far as animation goes, The Tale of the Princess Kaguya is a hand-drawn masterwork, so it’s a pity that box office numbers have been used to determine the kind of legacy the film itself stands against.