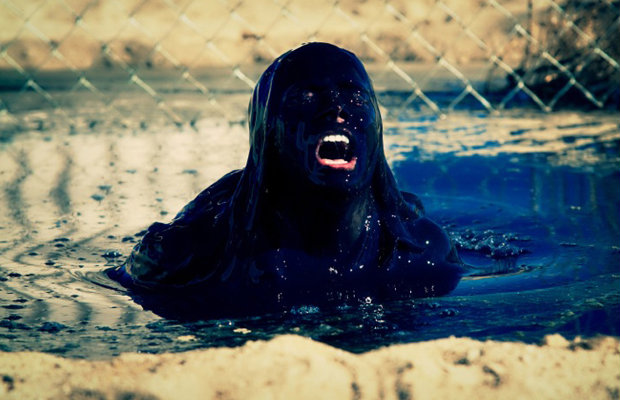 Environmentally defined dystopias can either be beneficent, as regards a film’s budget, or an incredible boon, generally in reference to either set design or appropriate casting. As a directorial debut, Thomas S. Hammock’s The Well may be a strikingly pared down post apocalyptic exercise, but it might have whittled away a bit too much from its lean narrative structure. Sure to remind audiences of the dusty hell of David Michod’s The Rover, Hammock’s film recalls the Old West as readily as any number of end-of-times predecessors. At times displaying a bit of intrigue with its topical ideas, too much banality and a general lack of tension renders the film as dry as the arid tomb it depicts.

In Oregon, “a few years from now,” the adolescent Kendal (Haley Lu Richardson) and her ailing male love interest, Dean (Booboo Stewart) are two of the last people in their area to survive. A decade long drought has toppled human existence as we’d been accustomed, stranding people into small bands, utterly dependent on a dwindling number of wells tapping into an underground water supply. But now, ten years on, those wells are finally drying up. While Dean suffers from a life threatening kidney disease, Kendal defends their local well. However, all the wells and the people guarding them have come under attack from a crew of marauders led by the vicious Carson (Jon Gries) and his daughter Brooke (Nicole Fox), who aim to kill the remaining population so that they may rule the land. But the hopeful Kendal thinks she’ll find the coveted distribution cap she’s been seeking, for if she does, she can fly away in an old plane that’s souped up enough to get them anywhere but there.

A set director for several Adam Wingard titles, such as You’re Next and The Guest, Hammock’s own film looks decidedly washed out by comparison, with DP Seamus Tierney utilizing natural light for the sun soaked parchedness often displayed. While the look and feel of The Well might be appropriate, female characters appear unrealistically, at least if we’re to believe they’ve lived in a desert without rain for a decade. Haley Lu Richardson and, particularly, “America’s Next Top Model” alum Nicole Fox are a bit primped and polished for the dunes. With drinking water so scarce, what’s going on with bath water? Human hair begins to look a certain way when infrequently attended to. But, hell, maybe after the apocalypse, the pretty survivors will just have naturally occurring blowouts.

However, since Hammock’s screenplay has so little going on other than its rigid movement through a rather formulaic endeavor, these distractions become all the more consuming. How exactly have these people survived without any replenishing water source in a decade? What’s going on with the food supply since other animals can’t operate the wells, potentially the only place where water is now naturally available? How in the hell is Booboo Stewart’s Dean alive in such an environment with bad kidneys? And that’s not even getting into the crusading band of villains led by Jon Gries, whose motives just seem silly.

The Well plays like one of those ideas a group of friends haphazardly concocts in jest without formally addressing all the proper logistics. While we don’t need to know exactly why there’s no water, the effects it would have on the people still alive in a world without it need to be somewhat realistic. That said, the young Ms. Richardson seems to be trying to enliven her performance with the much needed energy the rest of the film lacks, yet she never feels quite realistic.

While the screenplay is a certain disservice to the supposed intelligence of the character, Richardson never seems to be more than a wide eyed ingénue with some mud dabbed on her cheeks. Those hungry for decent genre efforts may be partially sated by the intentions of The Well, but it’s ultimately not strong enough in any regard to register as more than a good idea in need of stronger execution.

Reviewed on June 15 at the 2014 Los Angeles Film Festival – The Beyond.