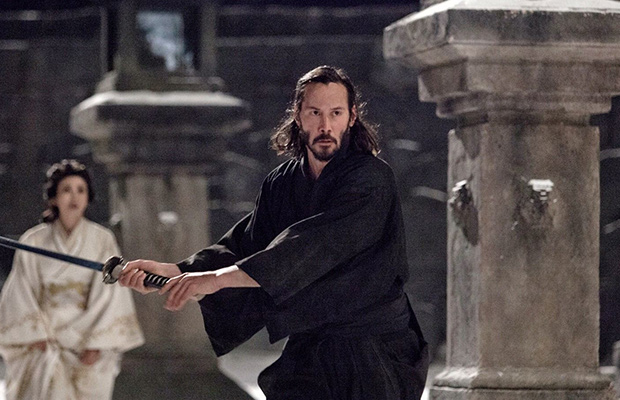 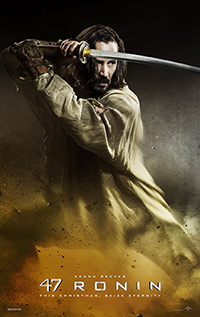 The story of the 47 Ronin, a Japanese tale based in historical fact that has become a timeless standard, as well as an epic that has been molded into cinematic form by some of the country’s greatest auteurs, perhaps most notably by Kenji Mizoguchi with his 1941 version. Tastsuyasu Osone, Kunio Watanabe, and Hirsohi Inagaki all have versions floating around out there, while Kon Ichikawa’s rather tedious 1994 version was the most recent rendering. Until now. Director Carl Rinsch curiously makes his feature debut with a version of the tale that feels like it was yanked out of some bargain bin Brothers Grimm fairy tale, aiding the noble samurai with witches, dragons, a ‘half breed’ American movie star, and the English language.

While there are differing variations of the story, for the purposes at hand here it’s simplified to the insidious Lord Kira (Tadanobu Asano), who wishes to rule all of Japan. Part of this plan involves taking over Lord Asano’s (Min Tanaka) territory, and a recent visit from the Shogun Tsunayoshi (Cary-Hiroyuki Tagawa) to Asano seems to yield the perfect instance for Kira to have his witch (Rinko Kikuchi) use her black arts to concoct a scenario that sees the Shogun condemn Asako to perform seppuku. Because Asano dies, his samurai, now leaderless, are shamed as being Ronin. Kira banishes the Ronin from their land and vows that he shall marry Asano’s daughter Mika (Ko Shibasaki) once her year of grief over her father’s death ends. Mika, who has been in love with the mysterious half breed Kai (Keanu Reeves as a character discovered fleeing from his homeland by Mika’s people when he was a preadolescent, allowed to live with them as a social pariah), must say goodbye to him when he is banished along with the Ronin. But Kira decides to take leader Oishi (Hiroyuki Sanada) and lock him up in a pit to break his will for vengeance. Released after nearly a year in isolation, Oishi seeks out Kai, and together they gather their fellow Ronin to seek retribution for their fallen master.

It’s unclear just how grossly unaware Rinsch and his screenwriters Carl Morgan and Hossein Amini are of their butchering until we get a title card just prior to the end credits that drops a blurb on the historical significance of these figures and how they were used to inspire this film. But even worse than ignorance and bastardization is the film’s complete and utter inability to generate any sort of interest at all.

With commendable visuals and even a decent use of its over-dependence on CGI to unspool its hackneyed narrative, it can’t manage to hide the fact that is has no pulse. 47 Ronin is dull, bloated with exposition, and boring. At the center of this deterioration is the woefully miscast Keanu Reeves, who is supposed to be an outsider due to his shameful status as a half-breed. Oh, how he learned to hate the word.

Only, Reeves, in all is Asian-ish half-breed glory, might as well be sleepwalking, sporting no expression at all as he kills men, beasts, and apparently carries on a secret romance with Ko Shibasaki, yet not one onscreen moment carries any enthusiasm to gird the imagination. His character’s inclusion is a device specific to this version, but it feels rather like when Christian Bale insisted on being part of the last Terminator film but only if the script was rewritten to include a character he preferred to play.

Actual Japanese members of the cast should be recognizable, from several genre players such as Shibasaki from the original One Missed Call (2003), Hiroyuki Sanada (Sunshine; The Wolverine), and Tadanobu Asano (Ichi the Killer), to Oscar nominated Rinko Kikuchi (Babel). All of them are utterly wasted, trapped in silly or even simpering exchanges. Even Kikuchi, a witch bitch that transforms into a (poorly animated) white fox and cloud colored dragon, a role that could max up the camp factor, is flaccid. These fantastical flourishes are meant to generate mainstream interest, but instead they feel like convenient distractions from the sometimes complicated history upon which the tale is based. Meaning that, even for those blind to this version’s considerable narrative liberties, it’s not particularly worthwhile, either.