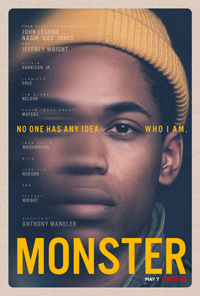 While more of an interesting conversation piece than the accomplished melodrama it deserves to be, Anthony Mandler makes his directorial debut with Monster, based on the 1999 novel by noted YA author Walter Dean Myers. A commendable cast, many with a presence overpowering the limited characterizations they’re allowed to play, isn’t quite enough for the film to succeed as an astute social issue drama. Mandler and his DP David Devlin come from the realm of music videos (Mandler has directed sixteen such items for Rihanna alone), and there’s a definite sense of parallel film school vibes not only in the film’s text but behind the scenes as well.

Myers’ text is adapted by Colen Wiley, Janece Schaffer and the esteemed Radha Blank (whose own directorial debut, The Forty-Year-Old Version, was released last year, despite having premiered two years after Mandler at the Sundance Film Festival). While the unfortunate limitations of the American legal system allow for this kind of material to remain timely, it’s a scenario which brings us to the precipice suggesting a more interesting story beyond the credits.

Steven Harmon (Kelvin Harrison Jr.), a bright and likeable 17-year-old high school student aspiring to be a filmmaker, finds himself awaiting trial as an accomplice to a robbery/murder. His lawyer, Kathy O’Brien (Jennifer Ehle) is no stranger to how the system works, and while hopeful of being able to prove her client’s innocence, knows it will be an uphill battle defending a young, Black man. A dual trial with Steven’s alleged colleague, William King (Rakim Mayers, aka A$AP Rocky), commences. As she tries to distance her client from his relationship with King, and their cohort Bobo (John David Washington), who’s on hand to testify against both of them, eventually the truth proves to be more complex than it seems.

What’s interesting about seeing Monster several years after it was made is how it already serves as a time capsule for its younger cast members. Kelvin Harrison Jr. provides a simultaneously empathetic and suspicious turn as a teen caught up in the Kafkaesque, but he would go on to provide greater complexities in films like Luce and Waves. John David Washington (who also appeared alongside Harrison in 2018’s Monsters & Men), likewise, was on the verge of breaking out in BlacKkKlansman (2018), while Lovie Simone would later lead Selah the Spades. Jharrel Jerome (Moonlight; Concrete Cowboy), Nas, and A$AP Rocky are also in the mix as interesting, if somewhat demure characterizations, while heavyweights like Jennifer Hudson and Geoffrey Wright as Steven’s handwringing parents, have little to do. Tim Blake Nelson has the misfortune of peddling themes and dialogue which should have been subtext, such as a discussion on Kurosawa’s classic Rashomon (1950), a narrative revered for how the ‘truth’ changes based on one’s perspective to any given situation—a clip would have sufficed.

Where Monster divines its power is through courtroom deliberations, and the formidable Jennifer Ehle navigates a tricky scenario of being sympathetic as Steve’s lawyer without coming across as a white savior stereotype. Blunt and flinty, Ehle’s shared sequences with Harrison provide Monster with the energy it needs.

Flashbacks to his life prior to the murder/robbery get lost in stylized narration and repetitive visual motifs (although Meyers’ novel also mixed screenplay formatting and diary entries), while more of A$AP Rocky and less of the cliched Lovie Simone tangent could have established more of Steve’s tragic naivete. However, Monster does present a complex smattering of intersections, where race and class allow for the smidgen of privilege needed to navigate a system built on preconceived notions. The haunting final line asks what we see when we look at Steve Harmon, once all is said and done, all his secrets revealed. Your answer to the question is potentially a starting point for your own private deliberations on privilege, empathy, and who the system is designed to serve.