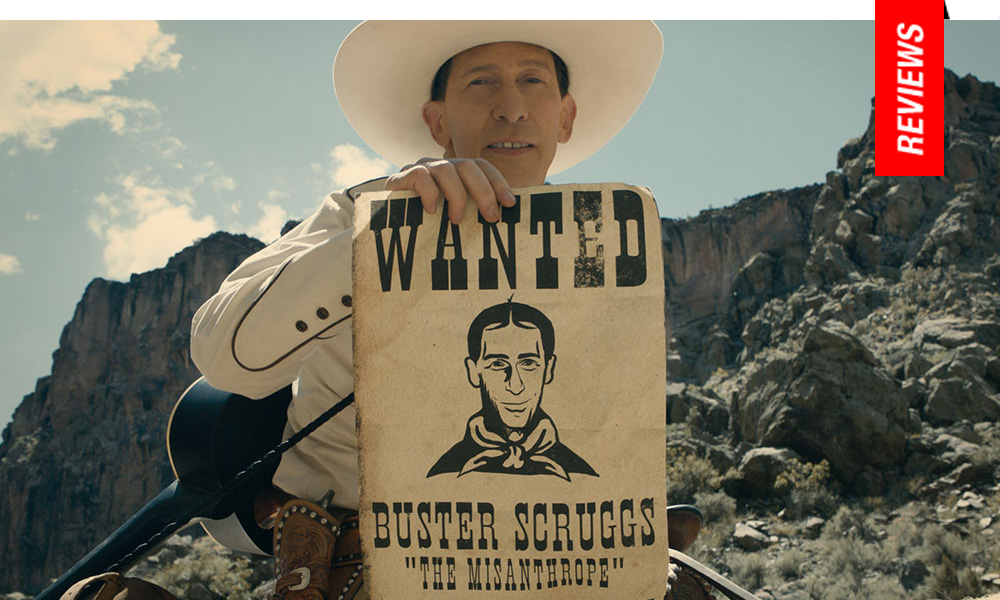 The Ballad of Buster Scruggs | Review 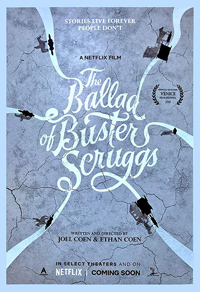 In thinking about the anthology form in cinema, Joel and Ethan Coen would probably be as good as any in tackling an entire set of tales by their own selves. They have the range and the talent to make even fleeting moments come alive, and The Ballad of Buster Scruggs shows that time and time again. And yet there are inherent limitations in assembling unrelated stories on top of one another, meaning that the latest piece of Western extravaganza from the True Grit and No Country for Old Men filmmakers isn’t consistently left standing at the end of these quick-fire duels.

The framework is as straightforward as it is beautiful, with an unknown hand browsing the pages of an old book and tenderly pausing on each color plate so the audience has plenty of time to admire the vintage illustrations and get a peek of the story’s content through the quote underneath them. “You seen ’em, you play’em,” reads the first one, accompanied by a drawing of a menacing gunslinger opening fire over a poker table. The Coens being the Coens, however, the whole thing is at once tenderly respectful of the material and eager to break it up with a bit of meta pastiche.

To nobody’s surprise, The Ballad of Buster Scruggs contains musical numbers, fourth-wall-breaking characters, absurd brushes with death, exquisitely funny passages of dialogue, poor devils tortured by fate, parable of virtues and a stagecoach headed for the afterlife. And they are all brought to life by a deep roster of both familiar and out-of-left-field performances: Zoe Kazan, Tom Waits, Liam Neeson and Saul Rubinek are some further highlights. Even the homages, which can become tedious in a western, are subtle or quickly dispatched with (is that a echo of ‘L’estasi dell’oro’ I hear in Carter Burwell’s music over the scene in which Tom Waits’ prospector finally finds a yellow-streaked rock after obsessively digging an entire field?). In other words, you know what you are getting, and at no time during these 135 minutes it should ever be taken for granted, because it can be glorious.

The best new trick, though, may very well be the peculiar rhythm the Coens choose to plant in this film. The first two stories are deliberately cranked up to eleven, heavy on gunplay, action, slapstick and a more generally stereotypical vision of what Western means. The eponymous Buster Scruggs, the first character we meet, is designed to dazzle and lure you in; as played by Tim Blake Nelson, he’s a chipper, singing outlaw dressed in white and carrying nothing more than a gun, a guitar and a colossal amount of swagger. No less entertaining, vastly due to a killer punchline by James Franco, is the second episode, also featuring the always brilliant Stephen Root as an enraged bank clerk, wearing an armor made of cooking utensils, who rushes robbers screaming “Pan shot!” when his iron blocks their lead. After witnessing that, you would be forgiven for thinking that’s going to be the general spirit of the piece. Instead, things slow down considerably with the two central stories, somber and meditative, and deliver a similar gut-punch with the fifth before taking things on an absurd otherworldly level with the epilogue. It’s perhaps as close as we’ll ever get to finding out how the Coens would arrange songs if they ever released a concept album. Surprising and intriguing, though it probably doesn’t do justice in terms of tone to the second part of the film.

Shot by DP Bruno Delbonnel (who previously worked with the Coens on Inside Llewyn Davis), the Coens’ West is great to look at – it helps that with so many stories to play with, we basically get to experience every possible setting the genre has ever produced, and then some – though it never loses a certain artificial edge in its contours. Perhaps a reminder there’s a hand turning the pages of this particular storybook, and that The Ballad of Buster Scruggs is a construct which can, sometimes, be too much of a good thing.