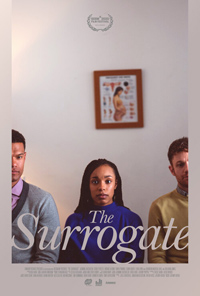 Melodrama as a genre, especially narratives centered deliberately on moral or ethical dilemmas, often has the propensity of devolving into treacly, overblown emotional excess. Conversely, such parameters, or such items defined within this genre, are also often overlooked, demeaned even, by these classifications—in Hollywood’s studio era, these were “Women’s Pictures,” narratives now more widely branded and embraced on television (think Lifetime: Television for Women). Perhaps its because we stray from embracing public demonstrations of emotion and empathy, even in the confines of the cinema.

Whatever the reasons for ‘melodrama’ too often diminished to smaller venues and/or budgets, a formidable reminder of its relative absence arrives from director Jeremy Hersh, who delivers a phenomenal juggernaut of mired intersections with his stellar debut The Surrogate, a film which pristinely layers its moral dilemma within an achingly compelling character portrait, showcasing a bold, multi-faceted performance for Jasmine Batchelor, also making her onscreen debut.

Jess (Batchelor) works as a web designer for a notable non-profit in Brooklyn which seeks to create opportunities for women in prison. However, her role there leaves her feeling underutilized. Perhaps this is part of the reason she jumps at the chance to be the surrogate for her best friend Josh (Chris Perfetti) and his husband Aaron (Sullivan Jones), though her mother (Tonya Pinkins) and sister Samantha (Eboni Booth) are only reservedly pleased for her. Twelve weeks into the pregnancy, the Trisomy 21 chromosome, which indicates the child will have Down’s Syndrome, is detected in the fetus. After some initial explorations, Josh and Aaron divulge they want to abort the fetus. But Jess finds herself balking at the idea, eventually deciding she may want to keep the child and raise it on her own, a decision which threatens her friendship with the couple and disrupts her career trajectory.

Of course, the dilemma(s) posed in The Surrogate aren’t wholly unfamiliar. If one were to toss narratives like Losing Isaiah (1995), The Twilight of the Golds (1996) and Nasty Baby (2015) into a blender, one might get the hybrid of class, race, and sexual orientation swirling like dark clouds around children, or the specter of children, as handled with supreme aplomb in The Surrogate.

In particular, Hersh’s film recalls Golds, based on a play by Jonathan Tolins, turned into a star-studded 1996 indie drama (which featured names like Faye Dunaway, Jennifer Beals, Brendan Fraser and Garry Marshall) which posed a dire hypothetical about eugenics and homosexuality. Hersh turns the screws a bit with a narrative outfitted perfectly for a current climate in a country which still balks at admitting to the trenchant systemic racism which has so insidiously become rooted in our conditioned minds as the norm, continually nourished by the slavery which mutated but was never wholly stamped out. And he rests all this energy on the resilient shoulders of Batchelor’s Jess, an affluent Black woman who has become so accustomed to fighting everyone else’s battles she has never allowed herself the chance to work on her own needs, desires or passions.

In one heart-rending scene after another, we witness a woman struggling valiantly to do the right thing, say all the right things, and search for answers to questions she ultimately learns must come from within herself. For anyone who has ever experienced the epiphany of realizing your own loved ones eschew the value you yourself hold dear, The Surrogate resonates like a nail in a coffin lid.

Hersh’s script and Batchelor’s performance are constantly reminding us of how beneath her cool, calm, and eloquently collected veneer, Jess is repressing an anguish which we only eventually see fleeting glimpses of. In the film’s third act, we bounce from one finely predicated conversation to another as Jess is desperate to commiserate with a like-minded human, only to delve into what could play like a scene from a horror film when she at last realizes her indignation has placed her in the realm of a perspective she’s spent her career distancing herself from.

All of Batchelor’s sequences with Chris Perfetti and Sullivan Jones are a masterclass in formulating emotions between words, while a rollercoaster blow out with Tonya Pinkins ebbs and flows with a seething power play of ideals and subtexts. A beautifully calibrated film which begs to be experienced with an audience, it’s also a rare gem seeing as it arrives from a new director and a new performer whose collaborative efforts have fashioned a film as thought provoking as it is moving.