Fault in Our Tastes: Teenage Death Gets Warmed Over in Gomez-Rejon’s Celebrated Sophomore Film 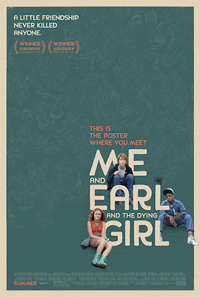 Taking home the Grand Jury and Audience prize following its warmly received premiere at the 2015 Sundance Film Festival, Alfonso Gomez-Rejon’s sophomore film Me and Earl and the Dying Girl is set to blaze through its welcoming audience of American indie quirk cinema. At heart, this is yet another example of maudlin angst repackaged in brighter colors meant to affix itself within the appropriateness of modern mainstream appeal concerning teens touched by cancer, recalling a similarly celebrated The Fault in Our Stars (2014). The friendship at the center of this narrative remains surprisingly platonic, but the mechanics of this endeavor are still rooted in basic tropes.

The big C could just as easily be replaced by the standard class issues breaking apart heterosexual youths, friends with benefits or otherwise, over the past century of cinema (Romeo and Juliet; Love Story). Credited as a ‘fresh’ take on the exploration of adolescent angst, Gomez-Rejon, adapting from Jesse Andrews’ novel, has moments of emotional integrity and even charm. But for those tired of these endless explorations in regard to privileged American teenage wastelands, even those brimming with ‘fresh’ asides and styles meant to jazz us out of the stupor of familiarity, the sterling buzz surrounding the title is bound to disappoint those unable to ignore the foundation of triteness.

Greg Gaines (Thomas Mann) is a rather odd teenager, taking considerable pains to engage, at least superficially, every group comprising his high school student body in an effort to stay pleasantly and fortunately invisible. He shares a richly creative realm of his own with best friend Earl (RJ Cyler), who lives within walking distance but on the wrong side of the tracks. The two of them have a fascination with foreign cinema, thanks to Greg’s amusing parents (Nick Offerman, Connie Britton), and they make their own spoofs of favorite titles for their own viewing pleasures. One of their classmates, Rachel (Olivia Cooke) is diagnosed with cancer. Rachel lives alone with her single mom (Molly Shannon) and in an effort to help them through this difficult period, Greg’s mother forces him to go hang out with Rachel. Both parties are at first reluctant but soon find they enjoy each other’s company.

Those with a low threshold for the emotional manipulations of the disease drama subgenre will most likely find themselves struggling to quell their tears during the last portion of Me and Earl and the Dying Girl, and most conversations concerning the film will ecstatically revel in how ‘relatable’ and ‘marketable’ the film is. Jesse Andrews does a superb job of adapting from his own novel, and there’s an undeniable earnest charm to a film that’s as equally undeniably bourgeois in its worldview.

At times, Gomez-Rejon absconds into full frontal quirk zone, attempting to add a bit of levity to the generally somber inevitability of the reaper’s entrance. But for those impervious to life’s realities piercing the comfortable bubbles of the generally contented, these moments reduce the film to broad manipulation. As attenuated as we are to the generous characterization of the scrappy, trenchantly adorable Greg, his best friend Earl is reduced to a figment, a spigot of wisdom hailing from the realm of the disenfranchised, outwearing his signature fascination with ‘titties,’ an observation accompanying the entry of nearly every pubescent female in the film. Likewise, Greg and Earl’s ‘filmmaking,’ whereby they bastardize classic cinema for their own private spoofs, tends to irritate. Their fascination with Werner Herzog recalls Diablo Cody’s too cool inclusion of Dario Argento in Juno, name dropping auteurs meant to enhance the diegetic street cred of the film’s creators. Instead, this serves to reduce these moments of homage to a pedantic level. Of course, Greg and Earl learn the ultimate challenge when forced to create an ‘original’ project for Rachel, something Gomez-Rejon’s ‘bigger picture’ struggles with, as well.

There is an audience sure to embrace the gussied up platitudes of Me and Earl and the Dying Girl, a film less superficial than the studio counterpart The Fault in Our Stars. And yet, despite some winning, tender moments (thanks in part to some great bits with the mothers played warmly by Molly Shannon and Connie Britton), Me and Earl and the Dying Girl has nothing new or dynamic to say beyond those moments clearly reflecting the horrible awkwardness of adolescence. Pleasantly agreeable, especially considering Gomez-Rejon’s first stint behind the camera was 2014’s remake of The Town That Dreaded Sundown, this universally acceptable portrait of mellow teen quirk will surely find a readily acceptable audience.