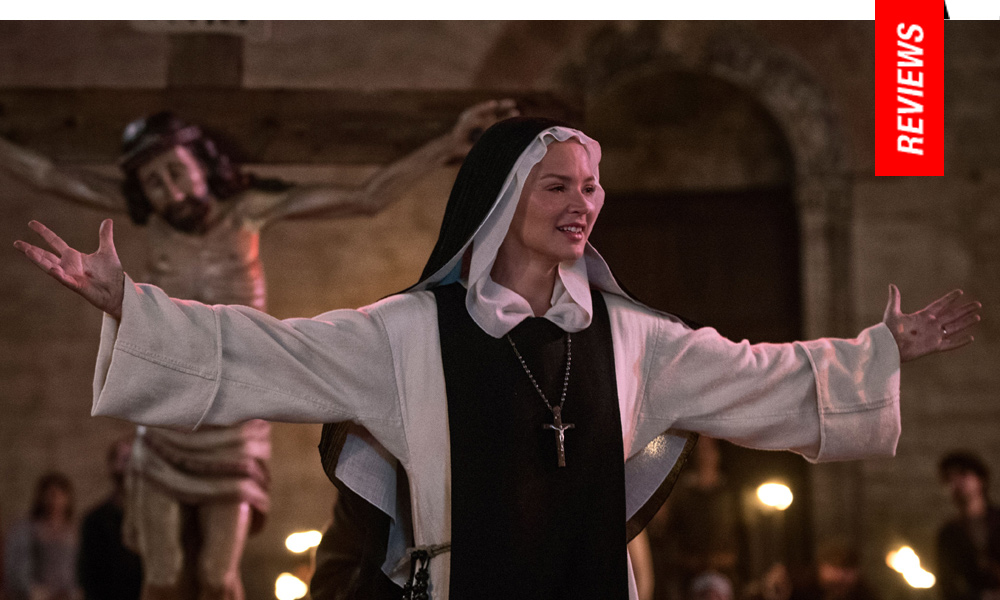 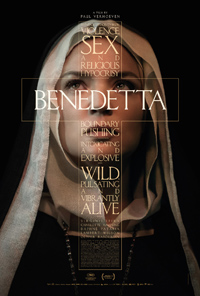 Occupying a dazzling intersection of exploitation and queer historical recuperation is the long-awaited Benedetta from Dutch provocateur Paul Verhoeven. The director’s second French film following his 2016 comeback Elle, he reunites with scribe David Birke to (liberally) adapt the 1986 historical study Immodest Acts: The Life of a Lesbian Nun in Renaissance Italy.

Marrying nearly all of Verhoeven’s favored motifs, religion and sexuality, cultural hypocrisy and bodily functions, it hits the sweet spot of sobering outrageousness which is exactly what such a portrait of this time, place and common attitudes demands. Although the titillation factor might be more easily interpreted as high brow camp, it’s a lavishly attenuated portrait of a whip smart hustler who either knew exactly how to manipulate the system or was an egomaniacal madwoman, or both. Far from the expected nunsploitation arena, which was at one point a vibrant subgenre in the 1970s), if anything, it’s another example of Verhoeven at the top of his game when allowed free rein.

“The body is your worst enemy,” Benedetta Carlini is informed as a small girl entering the Convent of the Mother of God in 17th century Pesce. Overzealous for Jesus since she was a small child, and claiming to have correspondence with the Blessed Virgin Mary, her parents pay the expensive dowry to the convent (which is how such religious institutions were allowed to thrive) and is accepted by the imperious Abbess Felicita (Charlotte Rampling). Eighteen years pass, and Bendetta’s (now Virginie Efira) chance encounter with a sexually abused waif, Bartolomea (Daphne Patakia) awakens Benedetta’s dormant desires and they become lustful lovers. The floodgates of her imagination swing open, and suddenly she’s graced with stigmata after various fantasies involving her marriage to Jesus. Although the Abbess is dubious, the Provost (Olivier Rabourdin) silences these doubts and celebrates Benedetta as a saint. Her relationship to Christ allows her to usurp Felicita’s title, who absconds to Florence to report the wayward sexual behavior and blasphemy of Benedetta. However, the Black Death threatens to consume them all.

To denounce Verhoeven’s latest as trash would be too simple. There are arguably trashy elements, sure, but all in the sake of balancing contemporary palettes with authentic period attitudes on sex and religion. Brown’s 1986 text also attempts to bridge gaps between all the missing pieces concerning Sister Benedetta Carlini as records were quite incomplete. The author herself became aware of Carlini as a footnote, and was able to dig up records of not one, but two trials (the latter ending in her eternal seclusion until she died at the age of 70). Verhoeven and Birke collapse many of these instances to approach more hysterical anguish, including a prominent use of the bubonic plague for a thrilling denouement.

Opening with (what else?) bird shit in the face of a one eyed soldier, Verhoeven doesn’t quite get Black Book (2006) in the fecal arena, but his insistence on depicting the realistic parameters of bodily functions and fluids abounds. The vibe of the film most closely recalls his 1985 English language debut, Flesh+Blood, an underrated entry in his filmography before Hollywood made him infamous. But there are shades of his past flavor all over Benedetta (including an arm boiling sequence which feels similar to Katie Tippel, 1975).

Shot by Jeanne Lapoirie (8 Women; BPM), there are some sterling, sumptuous shots of the convent, channeling eeriness and sexual energy of end times anxieties. Some phallic CGI snakes at one point might have been practical effects for Verhoeven, but these lean into the necessary cheese and sleaze allowing Benedetta a rare subversive quality—our potential dismissiveness allows for our ability to navigate how formidably and blessedly blasphemous the material is. Virginie Efira (who had a supporting role in Elle) perfectly channels the alluring manipulations of Benedetta, and her performance belongs in the same conversations praising Vanessa Redgrave in The Devils (1971) or Lucyna Winnicka in Mother Joan of Angels (1961). There’s a definite eeriness to the masculine vocalizations of Jesus through her person in sequences which recall the hysteria of The Crucible (1996). She shares a sort of mad energy with wild child Daphne Patakia, though the continual power plays confirm a cemented imbalance between them.

What’s most surprising is how subdued Benedetta feels, all things considered. Working within French cinema does wonders for Verhoeven’s approach to sexuality (unlike much of his English language work). While it has its share of memorable moments, however, the real star of the film is actually Charlotte Rampling as the withering, dethroned Abbess, clearly aware of Benedetta’s shenanigans from the start. Touching, especially in her sequences with Louise Chevillotte (The Salt of Tears, 2020), Rampling is also afforded all the film’s catty, snide commentary (alongside Lambert Wilson as the ambivalent nuncio generates the desire for film of their own). Enjoyably tawdry, if you enjoy Verhoeven (and you know who you are), Benedetta is a requisite entry in his formidable filmography.