Bonfire of the Wannabes: Durkin Returns with Scenes from a Consumerist Marriage 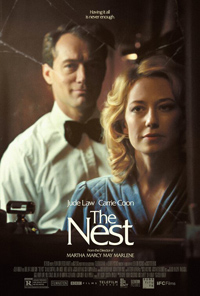 Sean Durkin, at last, returns with sophomore feature The Nest nine years after debuting one of the strongest films of the last decade in 2011’s Martha Marcy May Marlene. While this time around he produces a portrait of a crumbling marriage tested by economic fantasies conditioned through the tattered portrait of an American Dream revitalized by Reagan’s age of excess in the 1980s, and is thus much more familiar and less sinister territory than either his debut or the formidable 2013 mini-series “Southcliffe,” it’s a carefully drawn portrait of how metaphorical emptiness breeds alienation and self-destruction. Conjuring the spirit of literary giants such as Fitzgerald or Henry James (especially the latter considering the cross-cultural juxtapositions of America and England), it’s a blazing reminder of the director/screenwriter’s persuasive talents.

Rory (Jude Law) is an entrepreneur is New York with his wife Allison (Carrie Coon), stepdaughter Samantha (Oone Roche) and their preadolescent son Benjamin (Charlie Shotwell). When an opportunity arises for him to work for an old boss in London, Arthur Davis (Michael Culkin), Rory confronts his wife about his feelings of stagnation on Wall Street, convincing a move to the UK would be the economic opportunity they need to make it rich. He lures her with the promise of running her own horse stable, rather than working for someone else. And so, they uproot the kids and go to live on a palatial country manor in Surrey Rory has taken it upon himself to rent for a year with an option to purchase. But it soon becomes clear to Allison her husband hasn’t been exactly forthright about the reality of his opportunity.

True, we’ve seen this kind of marital dismantling before, but Durkin remains surprising, especially with the absence of the usual clichés (not an extramarital teaser in sight) and his creation of a trenchant loser in Law’s Rory, the quintessential charlatan who is all fake-it-till-you-make-it. If Rory seems a template for something like the DiCaprio figure in Scorsese’s The Wolf of Wall Street, he is a man strangled and not enlivened by the penny-stock tier, the desperation behind his million dollar smile reminiscent of Billy Wilder’s darker portraits of humanity. However, Law is most often relegated as a catalyst rather than a character, and The Nest is more interested in how his actions cause more extreme consequences on his family members—and to be fair, we’ve seen his trajectory before. His two chances to really shine include a goosebumps chilly scene with his estranged mother Anne Reid (apparently on the market for icky mums considering a recent turn in Retaliation with Orlando Bloom), and then his blow-up with an unbothered boss, a pompous and effective Michael Culkin, less concerned with the legacy of the empire he leaves behind than the yacht calling his name from a retirement cresting on the horizon. And speaking of mothers, an ever-so-brief turn from Wendy Crewson as Allison’s wine-swilling parent is equally telling in the film’s subtle explanation as to why this marriage has survived so long untested by certain realities.

The Nest is really a beautiful shoulder-padded outfit for Carrie Coon, who blooms beneath the character arc of a woman recognizing her complicity in this sham fantasy, replete with a Steinbeckian horse motif. Their country manor might as well be a haunted house, a dilapidated facade consuming them in its cold emptiness. Her behavior with her children is interesting, blunt with her elder daughter and coddling with her sensitive son (including some empathetic moments with Shotwell), and careless in a way which sells comparisons to Ang Lee’s 1973 set classic The Ice Storm (1997).

The dramatic heights come prior to a quiet finale which returns them to a baseline, a comically timed bit of awkwardness when Allison is having none of her husband’s salesman shenanigans as she schmoozes potential clients at a swank restaurant. Ditching her chinchilla coat and fleeing the engagement results in The Nest’s only real moment of catharsis in a gin-soaked night club where she dances to a Thelma Houston cover and Bronski Beat. At the end of the day, Durkin presents a chilly reality, but it’s a winter of discontent not without some potential hope for a family navigating stark consequences for living beyond their means.