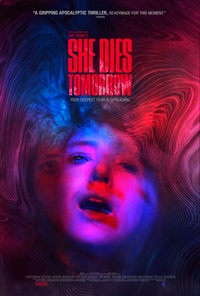 “Your deepest fear is spreading,” reads the tagline for Amy Seimetz’s sophomore directorial effort, the enigmatically titled She Dies Tomorrow. Capitalizing on a moment when isolation and contagion have bred complex traumas in a world irreparably affected by a virus plus a simultaneous (though ultimately nominal) reckoning with America’s racist realities and an onslaught of fascism and nationalism, Seimetz’s latest plays like a prescient allegory for contemporary ills.

And in many ways, her tale of a contagious spread of ideas and insecurities does speak to a rising personification of ills and afflictions—fear generated by religion, is, after all, an indoctrination of ideas which non-believers are immune to, but a culture susceptible to notion-born mental illness from a media machine dependent upon fearmongering begs an examination of the potency of self-fulfilling prophecy. Seimetz initially conjures such discussions in her latest effort, which ultimately flatlines on its own ideas.

Amy (Kate Lyn Sheil) seems to be in a tailspin. A recent dissolution of a romantic entanglement with Craig (Kentucker Audley) and her purchase of a new home has compromised her sobriety, and while on the phone with her sympathetic but increasingly frustrated best friend Jane (Jane Adams), she announces she doesn’t know how or why, but she’s going to die tomorrow. Jane tries to visit Amy again at her new home, even breaking in to reach her, but Amy has disappeared. Scheduled to appear at her brother’s (Chris Messina) home to celebrate his wife’s (Katie Aselton) birthday, Jane shows up having convinced she now shares the same fate—she doesn’t know how, but she knows she’s going to die tomorrow. The idea seeps in amongst the party hosts and their guests (Tunde Adebimpe, Jennifer Kim).

In several instances, Seimetz seems to be rising to the occasion of a neo Ingmar Bergman feature. Had she stayed contained in the confines of Sheil and Adams, this might have broached Persona (1966), or more likely, The Silence (1963) territory, where ideas about life and death are approached with the fervor and conviction of many of Bergman’s most notable religious characters. Sheil’s (who turned in a stellar performance in Seimetz’s 2012 debut Sun Don’t Shine, also opposite Audley) mental descent plays like the neon-lit version of Harriet Andersson’s madness in Through a Glass Darkly (1961)—however, the definite menace inspired by its set-up is obliterated by the time a wide-eyed Jane Addams crashes her sister-in-law’s birthday party (which does give us a very entertaining Katie Aselton) and then scares/seduces a doctor played by Josh Lucas. It’s here where She Dies Tomorrow begins to feel a bit silly, a bit too low-key for its own good (though a return to Sheil, the trauma which brought her to a new precipice, and her conviction of being useful in death does hit upon the droll, morbid element other sequences in the film try and fail to attain).

If Tunde Adebimpe, Chris Messina and Michelle Rodriguez (unfortunately saddled with the film’s least effective sequence) all feel a bit wasted, perhaps its because of their banal tangential plot points—perhaps if they had merely been figures in a landscape, non-entities populating a Resnais nightmare, they would have seemed more effectively utilized.

Similarly, Seimetz does wander into territory once occupied by Edward Albee, and She Dies Tomorrow feels a lot like A Delicate Balance, which Tony Richardson filmed in 1973, wherein an older couple are visited by their god daughter’s parents one night after they’re seized by a terror they cannot name or explain about a world gone haywire and their fear of being alone together—the point being, Seimetz is aiming for a more complex rendering of our ability to mainline existential hysteria more timeless and potent than current interpretations might suggest.

What Seimetz nails without stating it outright lies in the notion of perspective and our collective obsession with what cannot be controlled. While the success of the terror is arguably compromised by some distracting choices, She Dies Tomorrow does conjure the opposite reaction and perhaps one can seek succor in the brooding, crooning Spectral Display tune “It Takes a Muscle to Fall in Love,” for perhaps it’s more a matter of “You’re going to live tomorrow if you don’t die today.”