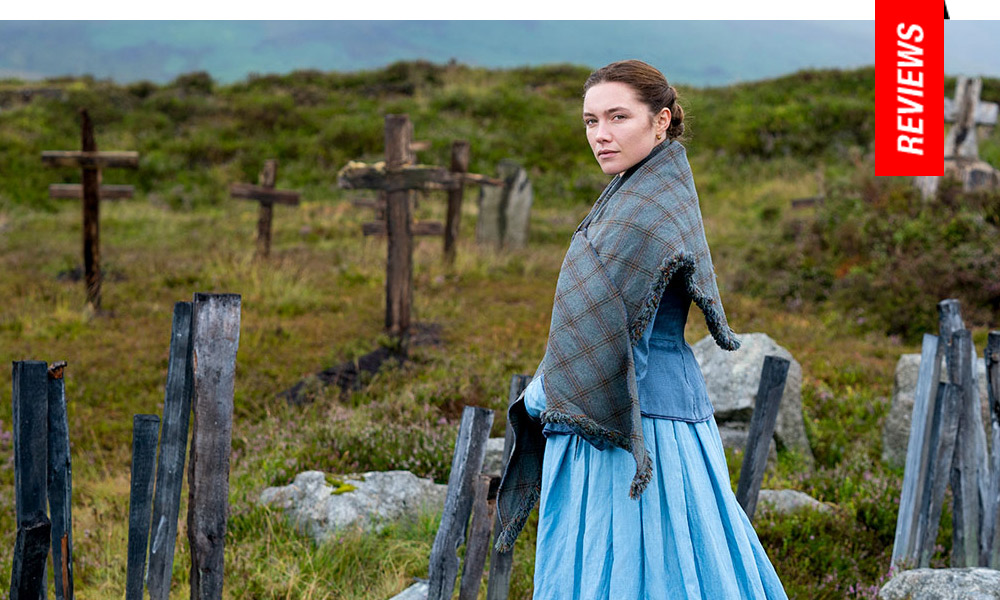 Power Surge: Lelio Ponders power and the profound in his latest which attempts to grapple with the nature of storytelling itself 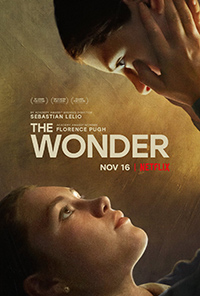 “This is the beginning of a film called The Wonder,” a narrator informs us as the 19th-century set film surprisingly opens on a contemporary studio soundstage. The wooden frame of a house is raised up on supports, while the meticulously crafted interior of a steamship sits off to the side. Acknowledging the artifice of the picture we’re about to see, the narrator continues by saying “we are nothing without stories” and “invites you to believe in this one.” It’s a profound opening to Sebastián Lelio’s latest, one that encourages viewers to keep the mechanisms and purpose of storytelling in mind from the start. Unfortunately, Lelio and his screenwriting team don’t engage enough with the concept to realize its full potential.

The film’s astonishing introduction, which for a brief moment suggests that Lelio might be making his own Dogville, quickly gives way to a standard, period set film. It’s 1862 and English nurse Lib Wright (Florence Pugh) has arrived in the remote Irish midlands. Anna O’Donnell (Kíla Lord Cassidy), a local girl, has become a tabloid sensation having allegedly gone four months without eating a single morsel of food. Anna, along with a nun (Josie Walker), has been tasked by the town council to spend two weeks keeping watch over the girl to try and discover the truth behind this so-called miracle.

Naturally, truth is a slippery and elusive notion, and it becomes apparent that each man on the council seeks a “truth” that will forward their own ends. Dr. McBrearty (Toby Jones) believes that Anna could be the source of a new scientific breakthrough. Meanwhile, the county priest (Ciarin Hinds) certainly wouldn’t mind if parishioners continued believing they had a saint in their community. The fact that the last food she ate was the communion wafer — “manna from heaven” — has already put divine weight on the incident. The standoff-ish O’Donnell family may also have their own reasons for the phenomenon continuing but it’s made clear money isn’t one of them. Any donations they receive from any visitors stopping by the house to gawk at Anna go straight to the poor box. As far as Lib is concerned, Anna is her patient, and she determinedly sets out to care for her no matter if the facts she uncovers about the fast upset the intentions of the town’s leadership. The real story is also an interest shared by William Byrne (Tom Burke), a reporter for London’s Daily Telegraph who has been dispatched to get the scoop the world is waiting for.

The Wonder eventually meets at a fascinating and vital intersection that investigates the construction of narratives and how women are used by institutions of power. It’s a thematic powder keg waiting to explode but the screenplay by Lelio, Alice Birch, and Emma Donoghue (based on her novel) is always just at the edge of really letting it seethe. The plotty nature of the script doesn’t give space for much else to breathe. The string pulling and vested interests of the town council are relegated to a few scenes. The antipathy at the time between the Irish and the English, which serves as a significant undercurrent to Lib’s treatment, is similarly slight, despite being explicitly mentioned in the film’s opening narration. And that fourth wall break and voice of God intonation only reappear at the end of the film to diminishing returns. It feels like somewhere along the way no one really wanted to commit to the bit, nor walk away from it either. It’s arguable that the film could’ve done away with the gambit, but then again, without that prompt to consider the apparatus of narrative constructs, the straightforward nature of the writing isn’t strong enough to elicit those ideas on its own.

It speaks to how good everything else works in The Wonder that even an imperfect film is utterly compelling. Pugh is a commanding presence as Lib, her pain and grief transformed into an unshakeable, protective, and headstrong mission to protect Anna. Given the recent tabloid nonsense around her, it’s a welcome reminder of the rich well of talent that launched the actress in the first place. And it remains something of a mystery how Burke can effortlessly walk into supporting roles as if they were a tailor-made fit. The duo manages the task of connecting their obdurate characters and forming an alliance of sorts, a unity around a girl that who is so manipulated her very life is put in danger.

Cinematographer Ari Wegner (The Power of The Dog, Lady Macbeth) communicates that sense of unwavering solidarity, positioning Lib and William standing like weather-beaten trees in Ireland’s cold brittle landscapes or capably holding off the damp in the film’s barren interiors. As always, Matthew Herbert is coming in from another planet with his score, and it’s no different here with cues that pulsate with hymnal ecstasy. Its another ingredient, along with the performances, that furthers the screenplay from what’s written on the page.

Why do we want to believe in miracles? Why do we need to? These feel like the unasked questions of The Wonder the ones perhaps just lingering beneath the surface. Even if the picture doesn’t maximize its thematic possibilities, Lelio has still crafted another complicated and captivating entry in his long list of films about women pushing against or occupying the edges of social norms. It might not be a miracle, but it will make you want to believe.