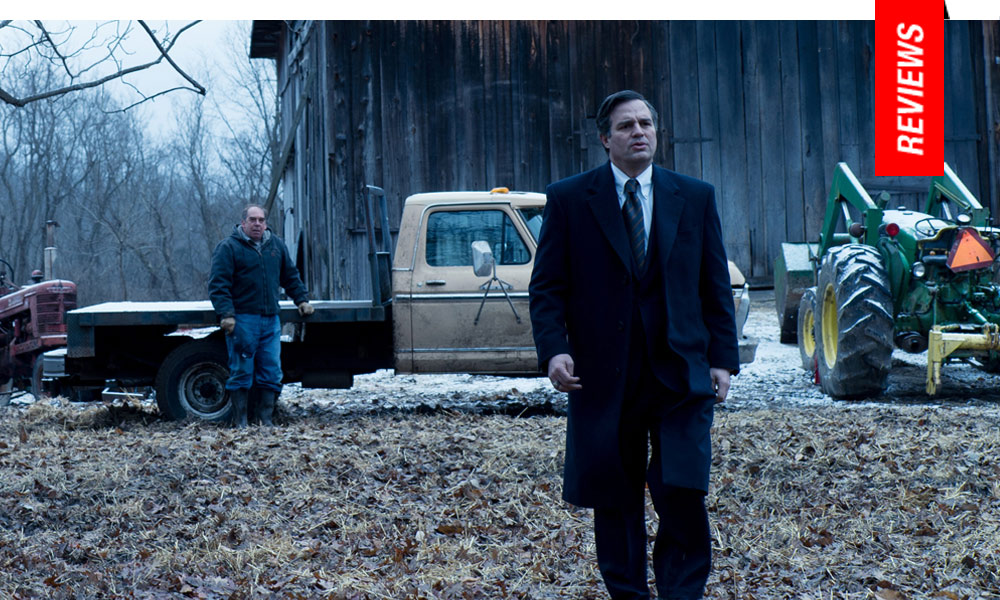 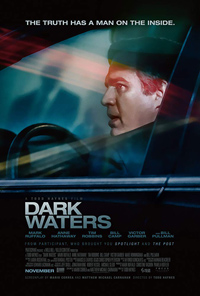 In the oft-prestigious subgenre of environmental thrillers, particularly those detailing the grossly inhuman actions of powerful corporations and corrupt government agencies, Dark Waters, the latest offering from perennial auteur Todd Haynes, feels a bit auxiliary. Packing decades worth of pertinent details into the West Virginia Dupont scandal, wherein the “forever chemicals” utilized for Teflon saturated the local population’s water supply, causing thousands of cases of cancer (not to mention the considerable environmental side effects on the landscape and livestock), Haynes and scribes Matthew Michael Carnahan and Mario Correa, inspired by a New York Times article by Nathaniel Rich, craft somewhat of a predictable disappointment in what plays like the visual aid to a Wikipedia entry on the events.

Told through the perspective of indefatigable lawyer Robert Bilott (Mark Ruffalo, also producing), Haynes details a chain of events beginning in 1998, wherein an attorney working for the benefit of chemical corporations is led to represent those being harmed by their extreme negligence. At the end, despite some strides towards a semblance of justice, Haynes leaves us with a morose impasse—imagine Ayn Rand attempting to be Capraesque.

A myriad of juxtaposing themes become apparent, many of these items side-barred (such as the Anne Hathaway trajectory, here miscast as a painstaking homemaker who gave up her own career as an attorney to support her husband) in favor of the valiance bestowed upon Ruffalo’s valiant despite-the-odds lawyer, often presented as something of a bumbling fool. What would have been more interesting would be a keener presentation of how and why his firm allowed for the continuation of case which was biting the hand that feeds them (Tim Robbins, as Bilott’s boss, is allowed a histrionic monologue usually only ever perceived in the movies, meant as a way to prove why some people are simply moved to do the right thing).

More interesting than Ruffalo (who Haynes does, for the most part, rein in from the particular affects he usually employees, a la in a similar turn in the 2015 Best Picture winner Spotlight) would have been a sharper, intimate focus on some of the families affected—which is where Dark Waters begins during its strongest emotional components, as relayed through Bill Camp’s (outfitted with some bushy Crawford brows) distressed farming family.

The film attempts to repeat this ellipsis in the second half through the (underutilized but always welcome) Mare Winningham but to little avail—this is a vehicle for the anguished consorts of privilege, those who walk the gray zone between right/wrong and good/evil, often choosing the side which benefits them most. Instead, we often have cloying glimpses into the Bilott’s household, where conversations and character tics depend on superficial exchanges on Christian ideology (an aside about Mary Magdalene, for instance, which would have once been an entry of subversion in Haynes’ films, instead reinforces the repression of truth and the continual re-writing of history to coincide with the needs of the capitalist heteropatriarchy—a point driven home because this Magdalene belief is held by those who are here represented as the new savior figures of a contemporary age).

Comparable to items like Erin Brockovich (2000) or Michael Clayton (2007) but without the performances or narrative finesse which bolstered either of those, Dark Waters (a title more befitting a horror film, and, obviously, recalls Hideo Nakata’s celebrated 2002 J-horror film Dark Water and the 2005 Walter Salles English language remake) needs to feel more galvanizing than it is to break through the apathy of the very conditions which allow, and continue to allow, for these situations to be continually repeated (as such, something like John Frankenheimer’s goofy 1979 horror film Prophecy somehow feels like it addresses the same issues while generating better conversations—in that film, a well-played exchange between Robert Foxworth and the paper-mill owning company man played by Richard Dysart manages to better define how both sides contribute to the problem in ways Dark Waters can’t seem to convey).

A number of notable cast members tend to elevate the proceedings, even if they’re mere cogs in this charade (Bill Pullman, Louisa Krause), while William Jackson Harper is stuck in a role eerily similar to his turn in Ari Aster’s Midsommar, 2019. On the plus side, Victor Garber walks away with the film’s most malevolent and realistic performance as a nasty Dupont official, while the wonderful Ed Lachman, Haynes’ usual DP, turns late 1990’s Ohio and West Virginia into wintry, murky landscapes where troubled characters are constantly obfuscated and reflected in their dire climes.