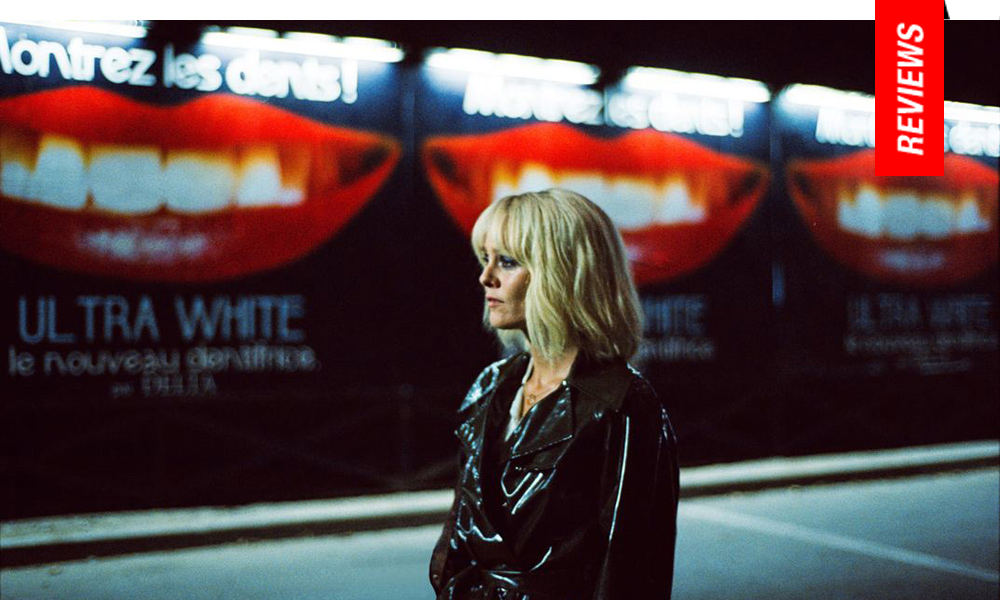 Your Vice is a Locked Room and Only I Have the Key Light: Gonzalez’s Queer Giallo a Dicey Mélange 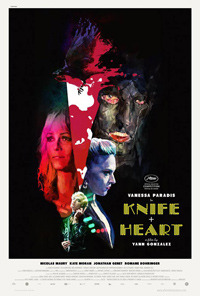 Love as an overwhelming, all-consuming fire seems to be the central conceit of Yann Gonzalez’s sophomore film Knife+Heart, a dizzying homage to Giallo cinema of the 1970s. Utilizing Vanessa Paradis in what might be her most enjoyable performance since Patrice Leconte’s The Girl on the Bridge (1999), Gonzalez sends us back to the seedy side of Paris in 1979, where a frazzled blonde lesbian producer of gay porn is inspired by the murder of one of her actors to embark on a more ambitious project by using the incident for her next film. While Gonzalez employs a variety of signature Giallo moves (not to mention positioning the film in a period when these pulp films mutated into the soft-core pornography going on within the film) and seems to revel in queering what was a notoriously homophobic, trenchantly heteronormative genre, his final product avoids coalescing into anything really enjoyable, always an exercise in style over substance, caught between uncertain glints of earnestness, self-aware comedy, and blunt titillation.

When gay porn producer Anne’s (Paradis) lover Lois (Kate Moran), who also edits all her films, decides to call it quits after a decade, she decides to convince her she’s capable of changing by going a different route with her work. The split coincides with the murder of one of Anne’s actors, and she feels inspired to use the incident by incorporating it into her next film project. With her usual director Archibald (Nicolas Maury) playing a composite of her in their film, Anne seems poised to reclaim Lois’ love—but the mysterious killer returns to slaughter more of her acting troupe. While the remaining cast and crew become terrified they’re next, Anne is led to investigate the murders herself, tracking the culprit thanks to the feathers of a bird left behind at each crime scene.

Knife+Heart’s narrative features a similar outlandishness to Gonzalez’s debut, the experimental You and the Night (2013), which is also unabashedly queer, and likewise features a goddess of French cinema, Beatrice Dalle. Paradis’ Anne, who takes the place of the central protagonist always reserved for the male lead in classic Giallo, is incredibly watchable as a self-involved alcoholic, who revels in blending life’s experiences into the fabric of her cheaply made, quickly produced pornos. She’s at odds, however, with the campiness of Nicolas Maury’s Archibald, her male alter ego in charge of directing the actors. Surprisingly, Maury isn’t allowed to go full tilt boogie with the flamboyancy promised by his early sequences, instead stitched into Anne’s latest production, playing the woman in charge of finding the killer. Behind-the-scenes antics, particularly involving an obese, happy-go-lucky fluffer (Pierre Pirol), known as the Mouth of Gold, tend to be more entertaining than whatever it is they’re filming.

A far cry from other recent attempts to glorify Giallo via homage, such as the outright parody The Editor (2014), Gonzalez employs similar interests with Kate Moran’s Lois, the editor who holds the key to Anne’s heart. What Gonzalez gets right, particularly in the beginning, is a terrifying killer, whose initial murder sequence featuring a dildo which doubles as a knife, is creepy and memorable. Decked out in a leather face mask, which recalls the troubled and troubling vibes of Friedkin’s notorious Cruising (1980), these early bits are disturbing, enhanced by an eerie soundtrack (the second victim is Felix Maritaud, who appeared in last year’s BPM and makes an impressive breakthrough as an empathetic prostitute in Sauvage, 2018).

The sheer ridiculousness, involving animal references, recalls some of the genre greats, like Argento’s The Bird with a Crystal Plumage (1970). A phenomenal soundtrack from M83, and some inspired frames by DP Simon Beaufils (particularly in an early sequence at the dance club Le Future, which is juxtaposed by another grisly murder) assists in making the production of Knife+Heart the real winner. Wending through a variety of classically convoluted plot points (including a bizarre aside which features Jacques Nolot and Elina Lowensohn) to a finale which is reminiscent of the climax in 1991’s Popcorn (wherein a codified queer villain is similarly dispatched), Gonzalez stays true to his vision, but the film frustratingly hovers in the realm of light comedy in a third act which is jarringly outlandish when compared to the film’s early subversive elements.

Reviewed on May 18th at the 2018 Cannes Film Festival – Competition. 100 Minutes