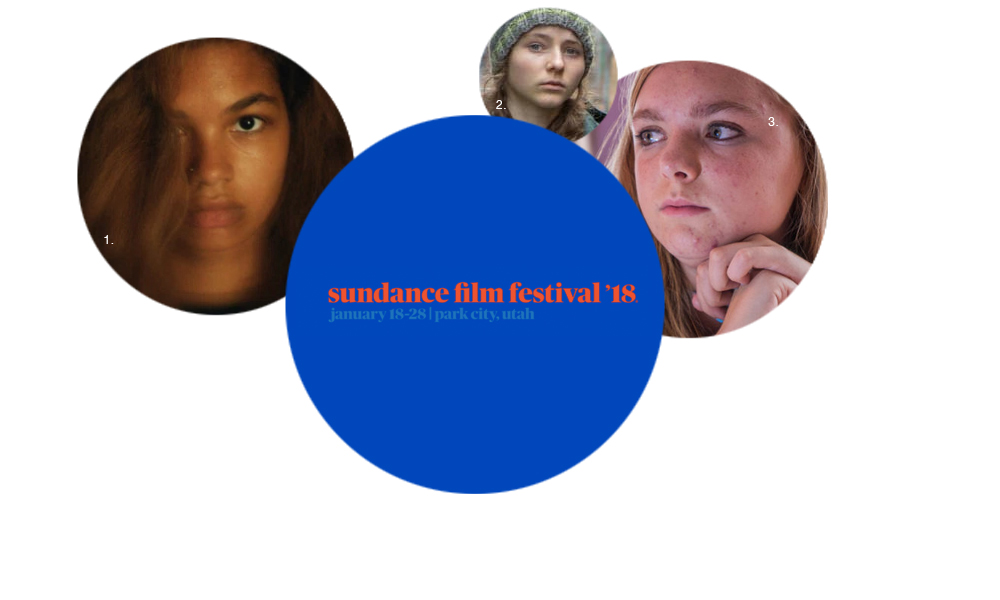 Last week we looked at the impressive class of new voices who made a noticeable mark at Sundance ’18, and now we go in front of the camera to find the new acting talents. Once again, I asked our Nicholas Bell, Dylan Dempsey along with Matt Delman and my own self to weigh in which breakout actors and actresses who made an instant/lasting impression with their perfs. Here is our top ten:

The youngest member of our ten set and perhaps the fiercest of the bunch, Jordana Spiro equips this Night Comes On supporting character with a built-in Ford Truck resilience. The 10 year-old character of Abby is what happens if the diminutive protagonist in Sean Baker’s The Florida Project were to fall further into the cracks. Like any child stuck in the foster care system, she relishes in moments that offer her any momentary reprieve from reality, but Tatum Marilyn Hall (featured in our Sundance trading card series) adorns her tough skinned character with a grounded understanding of the volatile adult world around her grasping both the complexities of her older sister’s reality while dealing with her own abandonment. In her screen debut, with a defiance and a gusto vulnerability, Hall is the poster child for ending the cycle. (EL)

Condola Rashad, daughter of iconic Phylicia Rashad, has appeared in several noted features, albeit in supporting roles over the past several years. From a brief role in Sex and the City 2 to playing alongside her mother in a television remake of Steel Magnolias and then to indie art-house with a small bit in Joshua Marston‘s Complete Unknown, Rashad has assembled her own impressive CV. She steps out impressively in Come Sunday, her second collaboration with Marston, playing wife to Chiwetel Ejiofor as the reluctant First Lady of a suddenly struggling fundamentalist mega-church. (NB)

Kayli Carter, who made her debut in the Rings reboot (and also starred in celebrated television series “Godless”) makes her breakout performance in Tamara Jenkins‘ long awaited third feature, Private Life. Playing the step-niece of Kathryn Hahn and Paul Giamatti, Carter steals the heart of the infertility melodrama as a soul-searching young adult eager to find meaning. Taking center stage a la the Natasha Lyonne character in Jenkins’ 1998 debut Slums of Beverly Hills, Carter is the standout as the emotional core in the director’s latest offering. (NB)

Desiree Akhavan’s second feature The Miseducation of Cameron Post won the Grand Jury Prize at Sundance ’18—but it was 19-year old Forrest Goodluck, in a secondary role, who won audience hearts. When Cameron (Chloe Grace-Moretz) is sent away to a gay conversion therapy camp, she becomes fast friends with the resident ne’er- do-wells, ‘Jane Fonda’ (Sasha Lane) and mop-headed, sardonic Adam (Goodluck). Adam can’t come out as gay because his dad is in politics—so instead of self-pity, he finds hope in his background as a Navajo Two-Spirit: for him, this justifies his gender-fluidity. Goodluck’s first feature role was in The Revenant, as Hugh Glass’s murdered son—but this time around he gets to breathe life into his character.  His self-love feels genuine, as does his pain. He more than holds his own against Moretz and Lane; their scenes together are the film’s emotional backbone. In addition, his comedic presence is especially welcome. It’s not just a respite from the bleak subject matter: his levity makes him intensely relatable. In his sensitive portrayal of Adam, Goodluck provides a strong role model … not only for the LGBTQ community, but for us all. (DD)

Slowly perfecting her acting chops by way of back to back television gigs starting back with “The Knick,” it’s with the recurring role on “Show Me a Hero,” followed by a break-out juicy part in HBO’s “The Deuce” (see clip) that perhaps informed the actress on how to get into the grit and grim of the school of hard knocks character of Angel Lamere – a sort of almost unredeemable Harvey Keital-esque person on a mission in Night Comes On. Getting things done in a matter of factly fashion, in a post incarceration phase in this character’s journey, it’s such a pleasure to witness Dominique Fishback (our Sundance Trading Card) shifting gears essentially moving from darkened heart to a pair of dramatically complex charged sequences (one alongside her diminutive co-star in Tatum Hall) where she volcanic unpacks the 500 pound gorilla on her back. Sisterhood in cinema benefits tremendously by this screen dynamic. The future looks bright for this future Taraji P. Henson type actress. (EL)

Hamilton star Daveed Diggs has leapt from theater to the big screen. You may know him from his dual roles as Marquis de Lafayette and Thomas Jefferson in the smash-hit musical. Thanks to his on-stage prowess, he finally got a shot at his passion project, the hyper-stylized, Sundance ’18 opener Blindspotting. Over the past ten years, Diggs co-wrote the semi-autobiographical flick with his creative partner/real life buddy Rafael Casal; both star with irresistible chemistry. Directed by Carlos Lopez Estrada, Diggs plays Collin, who did time for being the wrong race in the wrong place at the wrong time. Set in a grossly gentrified Oakland during Collin’s last three days of probation, he is treading on eggshells. Between off-the- walls dream sequences and characters breaking into freestyle raps, Diggs could be praised for creativity alone—but it’s his convincing performance that sells the film. Playing a victim of the system with sincerity and grace, he delivers an enthralling range of emotions. When disappointed, his subtle looks speak volumes; when pushed, he erupts into palpable rage. Add great physicality, buttery flows and a superstar smile, and you’ve got a new face whom you’ll surely see more of—both on screen and on-stage. (DD)

This Danish actress has been working in feature films since 2011, but it wasn’t until she padded supporting player roles in back to back world preems at TIFF in Rasmus Heisterberg’s In the Blood and Hlynur Palmason’s Winter Brothers and now the lead in the breakout debut in Isabella Eklof’s Holiday where we finally took notice. The 20-something actress will likely be mentioned in future casting conversations along the likes of Stacy Martin and Laia Costa, but Victoria Carmen Sonne invites viewers to look beyond designer shoe wearing trophy-something appearances of a Bambi-like Sascha. With Sonne being the focal point of almost every sequence, it’s the character’s transgressions that make unwrapping this character such a delight. At times a physically demanding role, it’s the not so innocent lie, purposeful pitting of male egos, puff of a cigarette where we are witness to epic chess moves all under the guise of a subdued ferociousness. (EL).

Before stepping into the spotlight, Elsie Fisher lent her voice to Agnes, the little girl at the center of the animated Despicable Me films. Then the week after graduating middle school, she started production on Eighth Grade, slipping into the role of Kayla, a shy 13 year-old in her last week of middle school. Director Bo Burnham had to wait until summer break to shoot since all of the child actors, from what I can tell, were playing their actual age. It’s refreshing to see young talent take scripted dialogue and make it feel utterly authentic, down to the last ‘um’, which is also a testament to Burnham’s script. Apparently, unlike a mumblecore film, every ‘um’ and ‘like’ was on the page, so for Fisher to mumble and stutter so poetically is something of a feat. She is the focal point of every scene, and carries the entire movie on her tiny shoulders. It’s a lot to ask of a young performer–to pretend to be someone who’s pretending to be someone she’s not. There are many more layers to Kayla than the average angsty female protagonist in Hollywood. Fisher effortlessly shifts gears scene to scene while navigating a very honest and relatable reality. A second viewing may reveal even more about the paradoxical inner mind of an 8th grader in 2018. (MD)

The young actress in any new Debra Granik movie will undoubtedly be compared to Jennifer Lawrence, who Granik discovered for her 2010 breakout Winter’s Bone. In this case, the comparison seems apt. In Leave No Trace, Mckenzie plays Tom, a girl living off the grid with her father in the parklands of Oregon. Mckenzie is from New Zealand and had some experience with the outdoors, but a wilderness boot camp before filming helped her get more into character. What starts off as a portrait of an idyllic existence, free from the pitfalls of technology and adolescent woes depicted in Eighth Grade, turns into a tale of desperation and struggle. Her father (Ben Foster), who she clearly loves, is stricken with PTSD and can only find peace away from society in the forests of the Pacific Northwest. As soon as Tom starts integrating with the real world, making friends at a rabbit husbandry class, her father yanks the rug out from under them, and they venture back into uncharted territory. Mckenzie handles complicated emotions with a calm confidence that makes her a good pick to play the next YA action hero. She’s bright, independent, resourceful and likable, if not a little cold. Towards the end we realize that this youngster has an old soul, and in that way we respect and feel for her even more. (MD)

Despite not having any professional gigs to her credits, Helena Howard (check out her Trading Card) perforated the screen with the kind of prowess you’d find in seasoned actresses. While major kudos go to filmmaker Josephine Decker for firstly discovering this talent (at a high school acting competition!?) and shaping this prism of a character, what is remarkable in how Howard connects with the material and the character giving an Edith Bouvier Beales-like mood swing backbone. Pitted against the forces that are her mother and theatre acting coach, the titular character is the embodiment of the flash flood of complex hormonal imbalance in post teenagedoom / early womanhood years, defining self-identity and dealing with converging environments. In what could be considered pure catnip for critics, it’s the display of an actor working different circuit channels in a heavily fragmented character and the at times tense marriage of self exploration and self preservation that Howard not only nails, but nourishes. My immediate post screening thoughts: we will be seeing her in super-hero movie franchises soon enough. (EL).