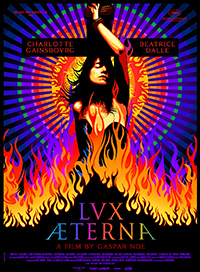 For those familiar with cult auteur Gaspar Noé, one either has a taste for his outré stylings (often sleazy, sex fueled narratives designed to ride a queasy balance between titillation and repulsion) or they do not. His latest, the medium length Lux Æterna, is a bit more on the experimentally playful side, produced by Saint Laurent and designed as the perfect vehicle for art-house scream queens Béatrice Dalle and Charlotte Gainsbourg. A film-within-a-film nightmare pulls from Noé’s usual bag of cinematic and literary provocateurs, freely interspersing texts from Dostoevsky, Carl Theodor Dreyer, and, first name basis references to Jean-Luc and Rainer W. Extra widescreen projection is used for some De Palma-esque split screen utilization which descends into a stroboscopic lightshow meant to fulfill the descent into the hellscape Noé promises. As his unhelpful final credits unspool, a final title card perhaps best displays the humoristic side of the project, “Thank God I’m an atheist.”

Perhaps the most enjoyable moments of this Eternal Light are those shared in the opening exchange between Dalle and Gainsbourg, both playing versions of themselves. Their conversation reveals Dalle is about to shoot a sequence in a film project which she serves as director, set to burn Gainsbourg’s witch at the stake. One gets the sense Dalle is perhaps divulging in more truth than fiction as the two women compare notes on playing witches, sharing personal stories and complimenting one another. Dalle reveals a lengthy memory of her time on a film shoot which would seem to be Marco Bellocchio’s The Witches’ Sabbath (1988), replete with castigation on one of the project’s Italian producers.

As the scene becomes ready to shoot, Lux Æterna quickly turns into another type of film altogether. A younger handsome man, presumably Dalle’s boyfriend, introduces Karl Glusman (star of Noé’s 2015 3D sex film Love) as a Los Angeles sycophant who flew in expressly to court Gainsbourg for his new film in the most obnoxious way possible.

Worse, it appears Dalle’s producer (Yannick Bono) is trying his best to undermine her thanks to a snobby DP Max (Maxime Ruiz) who refuses to listen to Dalle’s direction. A videographer is assigned to trail Dalle around the set so they can find a way to fire her (which allows Dalle to reclaim the incident in Miami during the filming of Abel Ferrara’s 1997 The Blackout which barred her ability to work in the US—a shoot also informing Dafoe’s characterization in Ferrara’s latest, Tommaso). Organizing a bitchy coterie of supporting young pretty things (including Abbey Lee of The Neon Demon, 2016) seems a grueling task for Dalle’s assistant Felix (Felix Maritaud of Sauvage, 2018) as all the film crew seems in a nasty uproar. And just as she’s about to shoot, Gainsbourg receives a troubling call from her young daughter claiming some boys at school had tattooed a cross on her “foo foo,” as the English language credits refer to it—which, of course, severely jars her reserve.

As the opening subtitle from Dostoevsky’s quote regarding the sublime pleasure of the elliptic outlines, Noé brings us to the precipice of a lightshow rabbit hole presumably meant to bring us to this aforementioned precipice. A bit Kenneth Anger and even more a nod to Fassbinder’s Beware of a Holy Whore (1971), a film reflecting the German auteur’s hellish experience making Whity (1971), Lux Æterna, which follows hot on the heels of the director’s extravagant dance madness beauty Climax (2018) will either be exactly the nightmarish dreamscape one hopes for or the repellant fascinations of boundary pusher run amok. Whatever one’s personal response, it’s another unexpectedly fascinating sensory experience from Noé—and a fantastic showcase for the kooky Dalle, the enduring effigy of the cinematic hysteric in this tribute to her influential Betty Blue (read review).