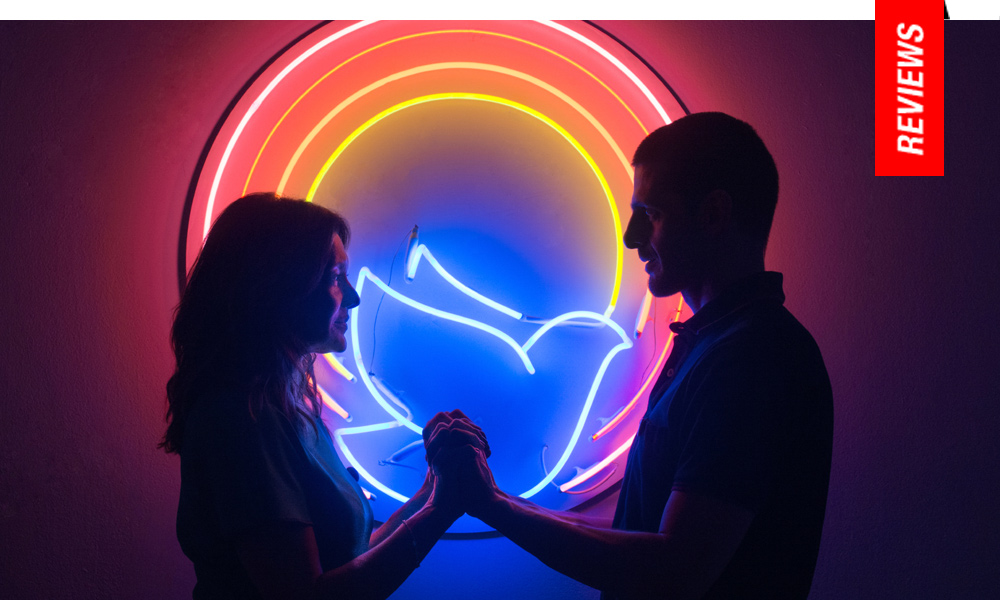 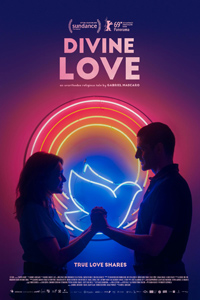 The Immaculate Conception remains one of the notorious suspensions of disbelief in Christian folklore, and Brazilian director Gabriel Mascaro examines the problematic contradictions of contemporized religion with a pseudo-science fiction lens in his third film, the formidably allegorical Divine Love. Leaving behind the meditative stupor of 2014’s August Winds and the Lynchian ellipses of his beautiful breakout, sophomore venture in 2015’s Neon Bull (read review), Mascaro takes to the mysterious emotional interiors of the urban future with his latest project, which fast-forwards nary a decade into the future with an intimate parable about the second coming of Jesus Christ told through the increasingly complicated restrictions placed upon a present day would-be Mary and Joseph.

Ensconced in an electro-drip score (among its five composers are DJ Dolores and Claudia N. from Kleber Mendonca Filho’s Neighboring Sounds, 2012) and buoyed by an endearing yet frustrating heroine, Brazilian bureaucracy and organized religion take on fetishistic and fascistic dimensions in a brazenly blasphemous venture dependent on an intriguing omniscient (in the true sense of the word) narrator, Mascaro’s first use of the device to enhance the interiority of his character’s complex lives.

In 2027 Brazil, the Neon Bible has usurped all aspects of a Christian’s existence, defining its believers’ every move, including extravagant night-life raves and saturating occupational exchanges. Joana (Dira Paes) works as a notary, using her position to gently manipulate couples on the verge of divorce into reconsidering their decision. Citing her own troubled marriage to Danilo (Julio Machado, the lead from Marcelo Gomes’ impressive Joaquim, 2017), a florist who denies selling his elaborate wreaths to non-believers (termed infidels) as testament to the possibility of reconciliation, Joana believes she is doing the Lord’s work by taking these troubled couples to her own private religious collective. Their group meets in the thick of night and engages in questionable activities, and further complicates Joana’s relationship to Danilo because despite his green thumb, he’s sterile, and therefore unable to plant the seed of life necessary for Joana to live a fulfilled existence in homage to her god. When an unexpected pregnancy brings her closer to Jesus Christ than she even thought possible, it drives a wedge between her marriage and her devotion to the church.

Low-fi sci-fi often becomes compromised in its visual aesthetic in independent and foreign cinema, yet such is not the case with Mascaro’s gently invasive, quietly atmospheric Divine Love. Notes of the dreamy Lynchian landscape which were more pronounced in Neon Bull become a quiet yet evident lull in his third venture, which also features tangential dream-like asides of Dira Paes in an elaborate pool which recalls the use of the Janice Rule sequences as the third woman in Altman’s classic 3 Women (1977). Paes, a fixture of Brazilian cinema (she made her debut in John Boorman’s 1985 film The Emerald Forest) recalls the majestic gentility of Lena Olin as the well-intentioned yet deeply troubled Joana.

A futuristic notary (the use of technology in both her occupation and the world around her is believably conceived), she uses her role as a ‘witness’ into the lives of others to manipulate them into joining her strict religious cult Divine Love, which is basically a self-help group for Christian heterosexual couples masquerading as a therapeutic session, focused on Bible verses and trust exercises before descending quite fantastically into a rather invasive swinger club. The neon-lit sexual interludes are striking for several reasons, concocting a titillating mood despite the significant religious parameters, wherein these intimate, human sexual exchanges recall the mastery of a Carlos Reygadas, who similarly juxtaposes animals and humans. It’s no mistake we are forced to contend with the animal world’s baseness in a subplot involving Joana’s dog, who happily impregnates the female in heat next door. The neighbor unceremoniously drops the litter off at Joana’s flat as the mutts cannot be registered. Like the abandoned children at the orphanage (labeled ‘bitter fruits’), whom Joana visits only to procure tears so she may drink them with Danilo to cure his sterility, these are garbage babies, unwanted mistakes and cruelly handled as such.

Through them and the bastard children of the near-future Brazil, Mascaro shows the malicious cruelty of religious zealotry, a system designed to prize heteronormative procreation as the only real element defining a successful marriage—until, inexplicably, Jesus apparently chooses the subservient vessel Joana, a claim which becomes an immediate problem at her church and causes an internal investigation in their ranks.

Everything about Divine Love is carefully and quietly executed. Joana and Danilo are kept at arms’ length, even as subjects involved in prolonged sexual congress with other supporting characters. An elfish, child-like voice narrates for us, the identity of which is finally revealed in the closing moments, and the use of which helps form this emotional distance from these characters. While Mascaro seems to take pains not to mock them, the whole set-up of Divine Love is characterized by a grand charade. As we’re told in the opening, Brazil’s famous Carnival has been replaced by this celebration of Supreme Love, whereby outdoor raves extolling the neon-lit craze for Jesus pulsates thumping house music into the atmosphere.

Outside of Danilo, Joana is most often seen seeking solace with a Pastor who resides in a slickly operated drive through confessional, a church seat outfitted atop the roller set of an office chair, sharing hymns which are overly emotional Christian rock songs. To describe Joana’s happenings, one would expect a bleak, black comedy. And yet, Divine Love presents her beliefs and her outcome with patient objectivity. Tender despite its oblique narrative style, Mascaro has crafted an eerie futuristic parable which resonates far beyond the credits in its thoughtful deliberations on faith and the signs we all seek to explain our continued belief systems, whatever approximations or paradigms they may be.