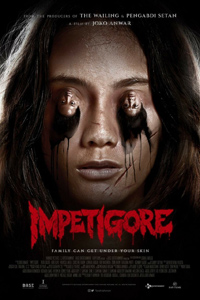 While Indonesian cinema has become more prominent on the festival circuit over the past several years, in part thanks to The Raid films from Gareth Evans and increased art-house fare (such as the Cannes premiered Marlina the Murderer in Four Acts, 2017), director Joko Anwar has built an increasingly prolific filmography in his native country, specializing in genre. Following the success of his 2017 remake Satan’s Slaves, Anwar’s latest, Impetigore (which roughly means “skin puppet”), landed at Sundance.

An exercise in creeping dread which explodes into a soap opera of exposition wherein tradition greets modernity in interesting fashion, Anwar’s latest is a lot of fun, even considering its excessively hysterical narrative which takes so many last-minute twists it nearly, but not quite, derails.

Maya (Tara Basro) and Dini (Marissa Anita) are best friends living in the city, barely making ends meet working as tollbooth operators. Unveiling their plans to open their own clothing stand, Maya is visited by a man who’s been lurking at her post. As his behavior is immediately suspicious, Dini calls security for her friend as the man utters some cryptic lines about the village he’s from, Harjosari, and the woman he believe Maya to be. Just as he’s about to deliver a death blow, he’s shot and killed. Fast forward three months to their struggling clothing stand and Maya has discovered an old photograph of her parents, who died when she was a child. Raised by her aunt, Maya remembers being called by the other name the man used. In the picture is a palatial estate and Maya believes she could potentially have an inheritance to be claimed. With Dini in tow, they travel six hours by bus and then via horse and buggy to a sinister hamlet, where many secrets about Maya and her family will be revealed. It seems there is a village curse wherein all the babies have been born without skin for the past two decades.

Anwar’s nightmarish fairy tale is pure Grand Guignol, an excessive, even ostentatious throwback to genre tropes it mashes together in a thresher. It’s perhaps most apt seeing as Guignol was an original term birthed from Laurent Mourguet’s puppet creation from the early 1800s (around the same time as Punch and Judy were popularized), but the puppetry in Impetigore is minimal, more of a narrative fixture which allows for some of its most arresting visual sequences.

At heart, this plays like the amped up nexus of Hou Hsiao-hsien’s The Puppetmaster (1993) and the classic Georges Franju title Eyes Without a Face (1959). Anwar also seems fixated on coaxing homage to Tobe Hooper’s The Texas Chainsaw Massacre (1974) in several key moments and throws in classical accents with a warbly, broken-down musical cue with “Ode to Joy.”

Stellar opening and closing sequences are enough to forgive the film’s mad dash to the finish, but the real pleasure is the film’s build up, even with some over-dependence on Marissa Anita’s comic relief. Both Anita and lead Tara Basro are Anwar alums, and they share an affable chemistry. Visually striking with a lot to digest in its third act, Impetigore is ultimately a lot of fun and should hopefully assist broadening Anwar’s international acclaim.