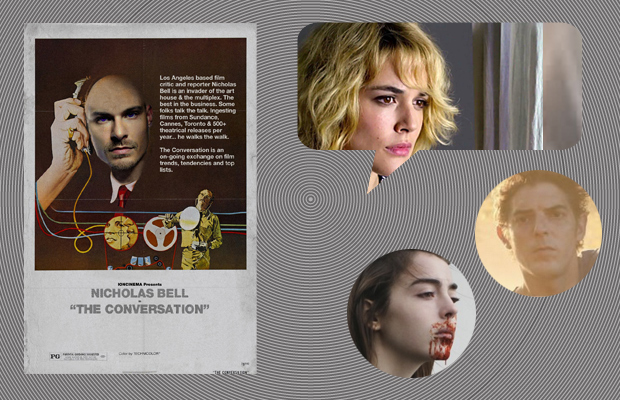 Tis the season for fevered wish lists and constantly fluctuating prognostications concerning the soon to be revealed 2016 program at the Cannes Film Festival. But nearly all of the attention is placed on who’s going to snag a coveted slot in the prestigious main competition, even though it’s usually easy to predict a great deal of the lineup based on leaked lists of titles screened as well as an auteur’s past history with the fest. There’s usually a bit of last minute drama, however, as evidenced last year by Thierry Fremaux’s controversial denial of slots to Arnaud Desplechin and Miguel Gomes (both premiering instead in Directors’ Fortnight and picked up awards), while past Palme d’Or winner Apichatpong Weerasethakul was relegated to Un Certain Regard.

Several titles have been more or less confirmed as not being ready in time, particularly Lucrecia Martel’s Zama. While we’d love to see Terrence Malick premiere Weightless at Cannes, this might be held for Venice (though his documentary Voyage of Time could likely appear). Benoit Jacquot, who usually prefers Venice anyway (he last appeared in the competition at Cannes in 1998), is assumed have The Body Artist completed. Likewise, fall release dates for Francois Ozon’s Frantz, Oliver Stone’s Snowden and Damien Chazelle’s La La Land indicate Venice or Toronto, while it seems Martin Scorsese’s Silence is going to be held for later in the year. Ukraine’s Miroslav Slaboshpitsky, who was rumored to have already been in production, just received final funding, so a later premiere would be expected if it’s going to be ready for 2016. David Michod’s War Machine hasn’t received as much anticipatory buzz, and if Netflix doesn’t want to settle for a UCR or DF slot, this may be another Venice competition title (as Beasts of No Nation was last year).

Otherwise, there’s a ton of buzzy titles looking for a spot on the Croisette, and, as usual, attention bestowed on American auteurs and English language options seems to be receiving the lion’s share of publicity. Steven Spielberg’s adaptation of Roald Dahl’s The BFG, Woody Allen’s Cafe Society, Jodie Foster’s Money Monster, and Abbas Kiarostami’s experimental 24 Frames Before and After Lumiere all seem likely titles to snag an out of competition or Special Screening designation with Orson Welles’ The Other Side of the Wind possibly making the Cannes Classics section a worthy detour.

It’s more difficult to ascertain what’s going to be screening in the official program’s sidebars, where lineups are sometimes determined by what doesn’t get scheduled in the main competition. Both Critics’ Week and the Directors’ Fortnight usually lead unexpected, vibrant new voices not included on everyone’s radar.

Charles Tesson’s Critics’ Week is reserved for debut or sophomore projects from new international voices (some recently acclaimed titles programmed here were The Tribe, Krisha, Mediterranea), and we’re hoping to see new debuts from Brazil’s Gabriel Almeida (The Friendly Animal), and Sweden’s Jen Assur with Ravens. There are several French actors making their directorial debuts this year, and this seems a likely program to premiere Gregoire Leprince-Ringuet’s The Forest of Quinconces and Sara Forestier’s M. Two sophomore features we are hoping bow here are Hagar Ben-Asher’s long gestating The Burglar, and Belgian Bavo Defurne with Souvenir, starring Isabelle Huppert and Kevin Azais.

For Édouard Waintrop’s Directors’ Fortnight, it’s easy to assume the lineup will feature a fair amount of genre offerings, and we’d love to see Fabrice Du Welz return here with his English language debut Message from the King. Likewise, Nacho Vigalondo’s Colossal could be invited, as well as Alejandro Jodorowsky if Endless Poetry is ready. And then Dutch filmmaker Martin Koolhoven has the thriller Brimstone, starring Dakota Fanning and Guy Pearce. The sidebar has premiered a number of surprising new Gallic talents (2014’s Love at First Fight and 2015’s Fatima both went on to win Cesars), so we expect a few under-the-radar items along with new titles from Jean-Charles Hue (After the Blood of the Beasts), actor Rachid Djaidani’s sophomore effort Tour de France (with Gerard Depardieu) and perhaps Quebec’s Anne Emond with Nelly. We’re hoping to see a few Sundance titles make their international premieres, as well, particularly Antonio Campos’ Christine or Nicolas Pesce’s The Eyes of My Mother. Other US titles might include Mike Mills with 20th Century Women or Robinson Devor’s long delayed, You Can’t Win starring Michael Pitt, while Ana Lily Amirpour’s highly anticipated The Bad Batch could be poised for entry here. Additionally, one can’t count out the possibility of another James Franco appearance with his adaptation of Steve Erickson’s Zeroville.

And then there’s the prestigious Un Certain Regard, where auteurs either ascend, descend, or are constantly programmed. A number of women directors seem poised for premiere in the sidebar this year. The lack of buzz surrounding German auteur Maren Ade’s Toni Erdmann is disconcerting, though not surprising considering Thierry Fremaux’s reluctance to program either Germans or females in the main competition. We’re wondering if her anticipated third feature might end up in UCR for a notable premiere (in 2013, Katrin Gebbe’s Nothing Bad Can Happen landed there). French Canadian Chloe Robichaud may return to the program with Borders, while French actress Noemie Lvovsky has directed another feature, Tomorrow and Every Other Day. Delphine and Muriel Coulin have Voir du Pays ready, and then Julia Ducournau has her debut Grave starring Laurent Lucas. The program may also have another major Icelandic entry Heartstone from Gudmundur Anar Gudmundsson might bow here (Rams from Grimur Hakonarson took the top UCR award last year).

Ulrich Seidl’s new documentary Auf Safari seems possible for UCR, and Sundance winner The Birth of a Nation from Nate Parker seems highly probable. Australia’s Cate Shortland may appear with The Berlin Syndrome while the latest from Belgian duo Jessica Woodsworth and Peter Brosens, Kebab Royal could end up here. Fellow Belgian Joachim Lafosse could revisit UCR again with L’economie du couple. Poland’s Angelin Preljocaj has Polina starring Juliette Binoche is on deck, and Portugal’s Joao Pedro Rodrigues should have his latest, The Ornithologist ready (while many have predicted this to be a possible competition entry). Spain’s Albert Serra has The Death of Louis XIV, while Brazil’s Marcelo Gomes has Um Certo Joachim, and fellow countryman Marco Dutra could return with It Was Heaven. Raoul Peck’s The Eyes of Karl Marx also promises to be a contender for UCR. If Italy’s Paolo Virzi is locked out of the main competition (and he doesn’t return to Venice), his latest, Like Crazy might land here.

Romania promises to be a major player at the fest, and several notables might be relegated to UCR (thanks to a pair of New Wave names also ready with new titles), such as Radu Milhaileanu’s The History of Love, Catalin Mitelescu’s By the Rails, Catalin Peter Netzer’s Ana, Mon Amour, Bogdan Mirica’s Dogs, and if it’s ready, maybe Radu Jude’s Scarred Hearts. And then, there’s whatever makes the final cut of the Main Competition.

At the very least, 2016 promises to be a little less English language heavy than last year, with a short list of American representatives headed by Sean Penn’s The Last Face and Jeff Nichols’ Loving, both seeming sure competition bets. French Canadian Denis Villeneuve has another US studio production ready, Story of Your Life, but this seems unlikely to make the cut. Nicolas Winding Refn’s The Neon Demon has been listed as a contender, but earlier reports indicate it’s not a sure thing. Plus Israel’s Joseph Cedar also makes his English language debut with Oppenheimer Strategies. Once again, the UK seems to have a paltry number of possibilities, but Andrea Arnold’s latest US set American Honey may snag a slot, while Ken Loach’s I, Daniel Blake should find a cozy home here.

French language seems to be a dominating force this year, with French Canadian Xavier Dolan ready with the starry cast of It’s Only the End of the World, while Paul Verhoeven is back with his first film in a decade, the French language Elle starring Isabelle Huppert. Japanese auteur Kiyoshi Kurosawa makes his first French language title with The Woman in the Silver Plate, and Tran Anh Hung unites a trio of French actresses (Audrey Tautou, Melanie Laurent, Berenice Bejo) for the highly touted Eternity. And then there’s the laborious process of designating the four or less allotted spots for the French auteurs, of which there are plenty. Duking it out for the final announced premieres, we have a tight race between Olivier Assayas (Personal Shopper), Rebecca Zlotowski (Planetarium), Katell Quillevere (Heart) , Nicole Garcia (In the Land of the Moon), Alain Guiraudie (Staying Vertical), Bertrand Bonello (Paris is Happening), Bruno Dumont (Slack Bay), and Arnaud des Pallieres (Orpheline). Less likely is Stephane Brize, unless his latest, Un Vie, was ready in time for consideration.

Latin auteurs should also have a greater presence this year, with Pedro Almodovar’s Julieta, Pablo Larrain’s Neruda, and if it’s ready in time, Amat Escalante’s The Untamed. The Asian presence will most likely be represented by Park Chan-wook with The Handmaiden and Hirokazu Koreeda with After the Storm (South Korea’s Na Hong-jin has been rumored to snag a midnight slot for his latest, The Wailing). Last year’s strong Italian presence will be reduced this year, though Marco Bellocchio seems poised to return to Cannes with Sweet Dreams.

Emir Kusturica’s On the Milky Road is certainly in pre-production, but reports have been varied if it will actually be at Cannes or not (though it has been tossed into the conjecture pot of possible opening titles). Wim Wenders has been predicted as a contender for The Beautiful Days of Aranjuez, but UCR might be more probable.

Other indubitable auteurs set to return are the Dardenne Bros. with their latest, The Unknown Girl, while two titans of Romanian cinema, Cristian Mungiu with Family Photos and Cristi Puiu with Sierra-Nevada will most likely snag competition slots for their country.

Lastly, Iran has some heralded auteurs vying to return to the main competition, including Asghar Farhadi with his untitled Death of a Salesman treatment (he was last at the festival in 2013 with The Past). Rumblings of a new film from Samira Makhmalbaf (who competed in 2000 and 2003) could also make an appearance, while her younger sister Hana Makhmalbaf’s Single Mother could be the third from her family (including father Mohsen Makhmabaf) to compete.

As always, it’s possible to guess a good deal of the program, but last minute changes and dramatic snafus are likely to upset predictions.