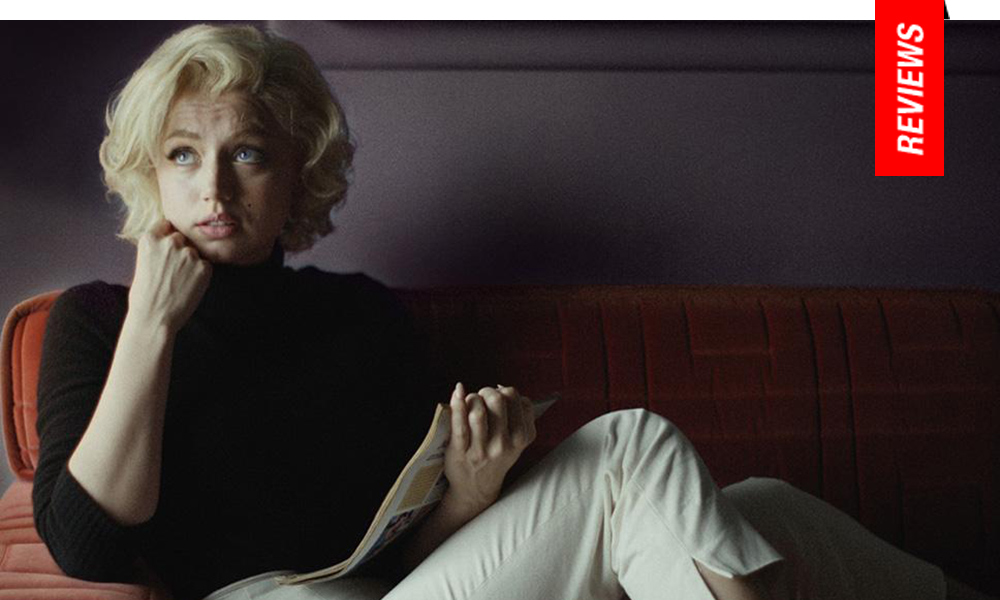 Eccentricities of a Blonde-Haired Girl: Dominik Explores Our Assassination of Iconicity 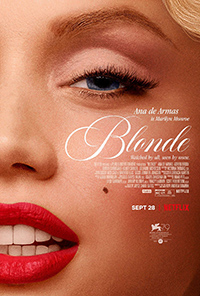 There’s no human who’s quite bedazzled the zeitgeist like Marilyn Monroe, the most desired and iconic commodity manufactured in the furnace of Hollywood. Her life, her loves, and her films have manifested themselves inextricably into the swirl of our collective consciousness and unconsciousness, which is why various attempts to examine her likeness through the very medium which built and destroyed her have always felt a bit hollow, sanitized by the sanctions applied to what’s actually appropriate to see vs. an actual semblance of reality.

Circumventing this is Andrew Dominik’s epic impression of the duality of Norma Jeane Mortenson/Baker and Marilyn Monroe with the long-gestating Blonde, adapted from an equally impressive and imaginary recuperation of the woman’s inner turmoil in Joyce Carol Oates’ novel, published in 2000. It is this fictionalized account which can finally unite the dichotomy of Hollywood’s Dream Machine with its alternate capability as a Death Machine. In Dominik’s own poetic stance, likening Marilyn to “the dust of an exploded star,” his portrait marries the intensity of Oates’ prose with a punk sensibility, allowing Ana de Armas to transcend the inherent gap of comparison in a meta exercise about an actor playing an actor who’s straightjacketed into the role she would birth and kill—Marilyn Monroe.

While Cuban actor Ana de Armas might initially seem an odd choice to convey Marilyn, she channels a surprisingly adept likeness, and despite whatever squabbles about a hint of an accent, we’re able to slip into the gear of this impression quite beautifully, conveying the complementary and contradictory elements of a woman revered for her sexual appeal while her intelligence and fragility were consistently denied or undermined. Many an actor has portrayed Marilyn in the past, with projects attempting to showcase the duality of her persona by casting different leading ladies, such as Ashley Judd and Mira Sorvino in 1996’s Norma Jean & Marilyn, or focusing exclusively on one particular moment in time, such as the terribly written My Week With Marilyn (2011), with white Michelle Williams embroiled in the contentious shoot of The Prince and the Showgirl (1957), though the Laurence Olivier directed title doesn’t make a blip on the radar here. 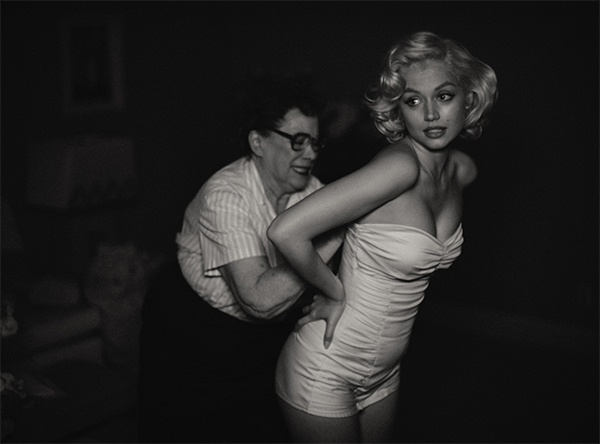 Beginning in 1933 Los Angeles, where the increasingly unhinged Gladys Baker (Julianne Nicholson) imparts a legacy of abuse and abandonment upon Norma Jeane, an unnerving trek up into fire besieged Hollywood Hills makes for a compelling analogy—-in her mind, her memories will always be forced to return to a kitchen on fire, or as Gladys remarks, “a preview of Hell.” It’s also where her desire to locate the father she never knew is born. The orphanage years are glossed over, and entirely absent is a teenage marriage which allowed Norma Jeane to stay in Los Angeles, but the linear trajectory of Norma Jeane to Marilyn focuses on a rape which allowed her to secure a contract with Columbia Pictures.

In chronological succession, Dominik explores several noted film productions (Don’t Bother to Knock, Niagara, The Seven Year Itch and Some Like It Hot are all attenuated through interesting moments) and significant license is taken when examining her more famous romantic, troubled relationships. The most curious addition, which is also quite prominent in Oates’ novel, is a thrupple scenario with Charles Chaplin Jr. (Xavier Samuel) and Edward G. Robinson Jr. (Evan Williams), the offspring of first wave Hollywood legends who Norma Jeane grew up idolizing, doubling down on the manufacturing theme of the studio era, which was what taught the young woman how to idolize fame and compartmentalize herself into a false identity.

An abortion born out of the necessity to act in Gentlemen Prefer Blondes (1953) and her fear of a child inheriting her mother’s mental illness creates a spiral into a downward trajectory, seeking stability and safety in the arms of men who fulfill the role of a protector she sought, purportedly, from the father she never met. Her ‘daddies’ would be the abusive Joe DiMaggio (Bobby Cannavale) and an initially fulfilling marriage to Arthur Miller (Adrien Brody). A sequence between Brody and de Armas is one of the film’s best, where she connects his inspirations to Chekov, as it was her desire to someday play Natasha in Three Sisters. 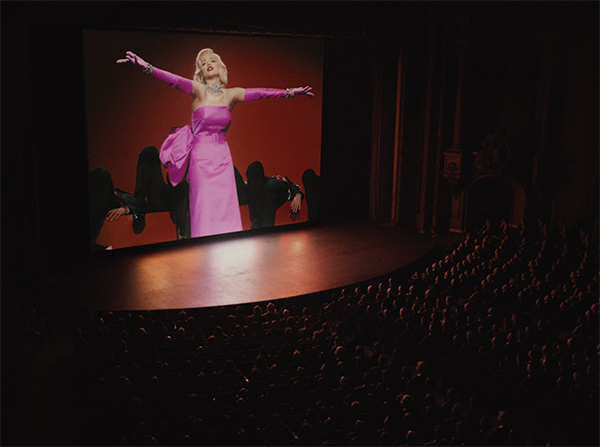 Though contention with Billy Wilder on the set of Some Like It Hot adds an interesting dimension in suggesting her awareness at how her Golden Globe winning performance as Sugar Cane was limiting and degrading as a brainless object, it’s interesting how the contention of The Misfits and the troubled production of George Cuckor’s incomplete Something’s Got To Give, which she was (sorta) filming when she died are both overlooked for the third act deliberations of her relationship to President John F. Kennedy (Caspar Phillipson). 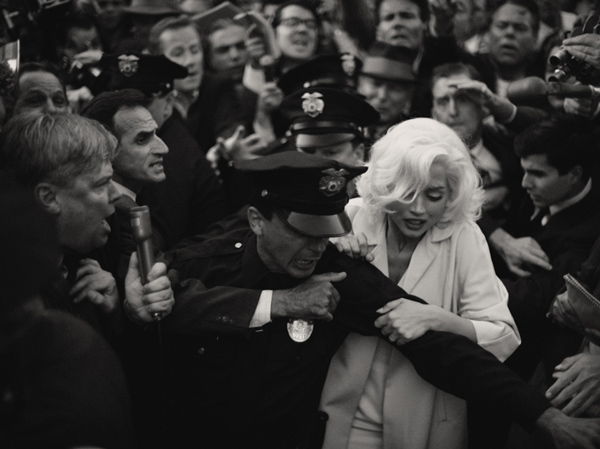 As with The Assassination of Jesse James by the Coward Robert Ford (2007), Dominik is as interested in dismantling an American mythos as much as he is diverting its trajectory to at least include the stark, grungy human realities scrubbed from the details in passed down legacies. Shot by Chayse Irvin (Pallaoro’s 2017 masterpiece Hannah, and Beyonce’s Lemonade), there are a stunning amount of recreated images of Marilyn freely absorbed into the action of the narrative. Much will be made of two vaginal POV shots during abortion sequences, but these are in keeping with Dominik’s theme about Marilyn being the ultimate representation of the sacrifice of celebrity, where a loving or hateful legion believes the world stage equals ownership and access to an individual, both inside and out.

How this justifies an NC-17 rating, however, is a reminder of how, culturally, there remains a puritanical fear of the female form and her complexity. Dominik’s muses Nick Cave and Warren Ellis provide an exceptional Badalamenti minded theme for Marilyn, twisting the film into a kind of Lynchian saga, as if Laura Palmer descended from the same compromised cloth.

Blonde is not intended to be the Marilyn Monroe biopic seeking endorsement from the masses. Instead, it’s a difficult saga of victimization and self sabotage, and more importantly a portrait of our shared cultural complicity in dragging what’s wild and beautiful into iron cages for eventual eradication. Elton John may have poetically compared her to a candle in the wind, but the flame of Marilyn was the reflection of Norma Jeane’s blazing inferno.

Reviewed on September 8th  at the 2022 Venice Film Festival – In Competition. 166 Mins.